Build it and they will come

Nestled in the scenic Laurel Highlands of Pennsylvania, the City of Connellsville is a progressive community of over 7,000 people and a wonderful place to live, work, and visit – with an abundance of recreational opportunities for residents and visitors alike.  Whether your interest is canoeing, fishing, biking, walking, or a summer concert in the charming downtown, Connellsville has something for everyone. Including a public-use airport that is a long-serving asset to the community.

The Joseph A. Hardy Connellsville Airport lies four miles southwest of Connellsville and serves the south-eastern segment of the Pittsburgh metropolitan area. Originally opened in 1938, as a co-op project between the City of Connellsville, Fayette County, and the Federal Works Progress Administration (WPA) Program, the airport was heavily used during World War II by the United States Army Air Force Air Technical Service Command. The Airport remained under federal government control until 1947, when it was returned to the City of Connellsville for use as a public airport. The Fayette County Airport Authority (FCAA) was established in December 1965 to take ownership and management of the facility. 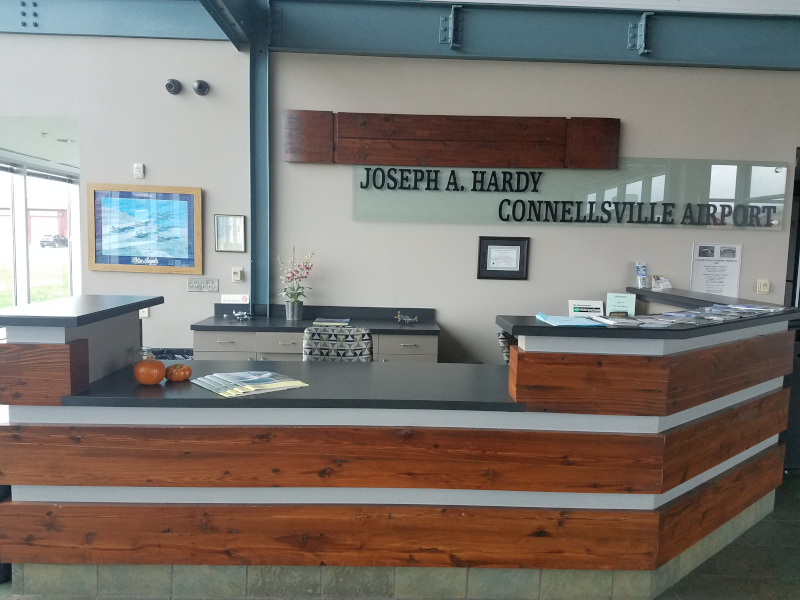 A lack of operating funds saw the airport fall into disrepair in the 1980s and ‘90s but a local business tycoon, Joseph ‘Joe’ Hardy recognized the importance of the facility to the community and stepped up with $1 million to help fund the $2.3 million cost of building new hangars. In 2007, it was renamed the Joseph A. Hardy Connellsville Airport, in his honor. John “Bud” Neckerauer, Airport Manager of the Joseph A. Hardy Connellsville Airport, shares, “Joe Hardy has been very good to the airport, since I came in 1984, he’s invested more than a million dollars into it. He’s well into his 90s now, but in appreciation of his great contributions through 84 Lumber, on his 84th birthday they named the airport after him. We wouldn’t be in the shape we are if it wasn’t for Joe.”

84 Lumber is the largest privately-owned building materials suppliers in the U.S. Joseph A. Hardy III, founded the company in 1956 in the rural town of Eighty Four, PA and turned it over to his daughter Maggie in 1992 when she was just 26 years old. A year later, the company exceeded $1 billion in sales. Today, the company operates 250 stores in 30 states. Maggie Hardy Knox also owns the spectacular Nemacolin Woodlands Resort, a huge asset to the local economy and the tourism sector for the region. Many people that fly into the airport on private aircraft have a vacation at the resort as their destination.

The airport hosts 64 home-based aircraft and has a waiting list for hangar space. Neckerauer explains,
“We are our own FBO and we raise revenue for the airport through fuel sales and hangar rent. We need hangars badly but that requires funding. There are three privately-owned hangars on the airport now, and we have had requests from people to do build their own, but when they find out the costs involved for stormwater infrastructure, etc. they change their mind. We do have the infrastructure, utilities and all, for three, maybe four more buildings. It was put in after the last time we built hangars at the end of 2015. We already spent the money for the site plan and it’s ready to go but finding the funding is the only stumbling block. The property was set aside for this hangar project and we built one, six-unit building on the site but the earth work was done and the utilities are in place for four more buildings. It’s shovel ready.”

There are also 100 acres of prime property accessible to the airport that could be developed. “A longer runway would definitely bring more business into Fayette County,” says Neckerauer. “We have an industrial park right across from the airport that’s been finished for about seven years and it’s sitting empty but there is some interest in it now. We are working on extending the runway and when that happens I think it will help the whole county as far as attracting new industry.”

At the present time, Connellsville Airport is getting ready to do a taxiway, thanks to a $1.5 million grant from the FAA. Major projects such as taxiway rehabilitation are 90 percent funded by the FAA, five percent by the state, and the airport contributes the other five percent – matched by Fayette County. The taxiway project is going out to bid with hopes of a June start. Neckerauer notes, “It’s been in the Master Plan for quite some time. It’s located down where we built the new hangars – that’s where most of the action takes place. We call it Taxiway Foxtrot because it was a runway when the military had the airport and it’s in very bad shape, so that’s being all redone. It won’t bring in any more business, but it will make it easier for the businesses that are already there to operate. And it will also make it easier for us to maintain the airport.” 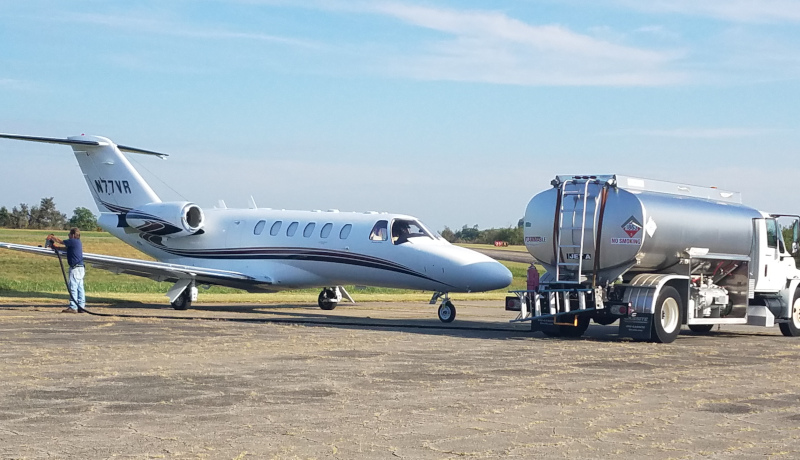 The flights that come in to Connellsville Airport are for both business and pleasure. “There is a shuttle from New York that comes in a couple times a week to bring people back and forth,” says Neckerauer “And we get a lot of people coming in on their way to Nemacolin Woodlands. The resort has their own runway but they can’t night land up there and they can’t land in bad weather. And we get tourists from all over the country going to the Fallingwater site. It’s a sought-after destination and, if you fly in here, I have courtesy cars that I loan out for people to drive there.”

Going forward, the great desire is to extend the 3833 ft main runway. The 12-year Airport Master Plan recommends an increase to 4400 feet and the airport has commissioned a study that looks at demand and has warranted an extension to 5,500 feet for the larger corporate aircraft. Neckerauer puts that at the top of his wish list, stating, “The runway extension, and more hangars. Both of those would make a big difference. In the past, the airport never built new hangars on its own, it was actually the military or private individuals. The first time we did it was in 2015. And people said, “Where are you going to get the planes to put in there? You’ll never rent them.” But like the saying goes: Build it and they will come. In one month, I had all but one corporate hangar full and two weeks later that one was rented too. Now, what I really need is more corporate hangars because when we build the runway we’re going to get more corporate activity in the county.”

Fallingwater is famous the world over as the iconic residence designed by architect Frank Lloyd Wright in southwest Pennsylvania’s Laurel Highlands, about 90 minutes from downtown Pittsburgh. A stunning work of art in its own right, the house was built in 1935 partly over a waterfall on Bear Run in the Mill Run section of Stewart Township in Fayette County. Created as a weekend home for the family of Liliane and Edgar J. Kaufmann, owner of Kaufmann’s Department Store, it is listed among Smithsonian’s “Life List of 28 Places to See Before You Die.”

Blending seamlessly into the gorgeous natural landscape, Fallingwater stands as one of Wright’s greatest masterpieces – and a beloved destination for enthusiasts worldwide. Those arriving on private aircraft at Joseph A. Hardy Connellsville Airport are only a half hour’s drive away from this legacy of architectural history.