It Just Keeps Getting Better

Business View Magazine interviews representatives of Killeen-Fort Hood Regional Airport for our focus on General Aviation in the U.S.

Killeen-Fort Hood Regional Airport (GRK) started operations on August 2nd, 2004, moving from the Killeen Municipal Airport (ILE), whose runway was not long enough to accommodate the airlines transition from turbo prop aircraft to regional jets. The transition to the Robert Gray Army Airfield was negotiated between the City of Killeen, Texas and the U.S. Army, and had to be approved by Congress. Robert Gray Army Airfield and Killeen-Fort Hood Regional now operate as a joint-use airport that leases approximately 81 acres from the army.

Being a Joint-Use airport, GRK shares the runway with Robert Gray Army Airfield, providing GRK with access to a 10,000 feet long and 200 feet wide runway. “We’ve had some of the largest aircraft in the world land here,” says Mike Wilson, Executive Director of Aviation for the City of Killeen Aviation Department. “The Army routinely has C-5 Galaxies come in.”

The next project in the pipeline for the Killeen-Fort Hood Regional Airport is a major one – construction of a new hangar, estimated to be completed around January 2022. The project comprises 16,000 square feet of hangar space with an additional 7,500 sq. feet of office and shop spaces for use by the current tenants. The facility will provide a good base for operations for CSI Aviation – a seasoned air transportation and air charter company, founded in 1979 in Albuquerque, New Mexico. The company provides passenger charter and cargo air transportation, as well as medical flight services. They are also a U.S. Department of Defense authorized air carrier; certified by the U.S. Transportation Command Commercial Airlift Review Board (CARB). This certification allows them to transport government and army officials.

The company’s footprint has expanded over the years, as Wilson recounts, “CSI started out at the airport by renting an office with a temporary tent shelter for a single plane. Their business grew, and they were treated so well here that they made the decision to relocate a large portion of their operations to the airport.” Killeen-Fort Hood Regional Airport is also in the design stages for their second hangar – estimated to be around 8,000 sq. feet with 2,000 sq. feet allocated to office space. For now, these are all rough plans with the preliminary engineering phase just starting. Even though it’s only in its infancy stage of planning, the hangar has gained interest from CSI, who have sent a letter to the management team requesting first consideration.

Space is definitely in demand. Wilson acknowledges, “Most of the land is occupied with our terminal buildings and support facilities, (car rentals and parking lot). Once the hangars are built, we’re pretty much out of room to build anything else for a while.”

The airport is currently negotiating to acquire roughly 60-75 acres of land from the army. This field is directly south of the terminal building. In the next three to five years, Wilson predicts they will have around 65-70 acres to develop for aviation development, such as cargo operations or a Maintenance, Repair, and Overhaul (MRO) space. The last major development at the airport was the completion of about 14,000 sq. feet of additional square feet to the terminal building. This provided increased passenger hold room space and new offices for the TSA. This also enhanced and increased their baggage inspection area. 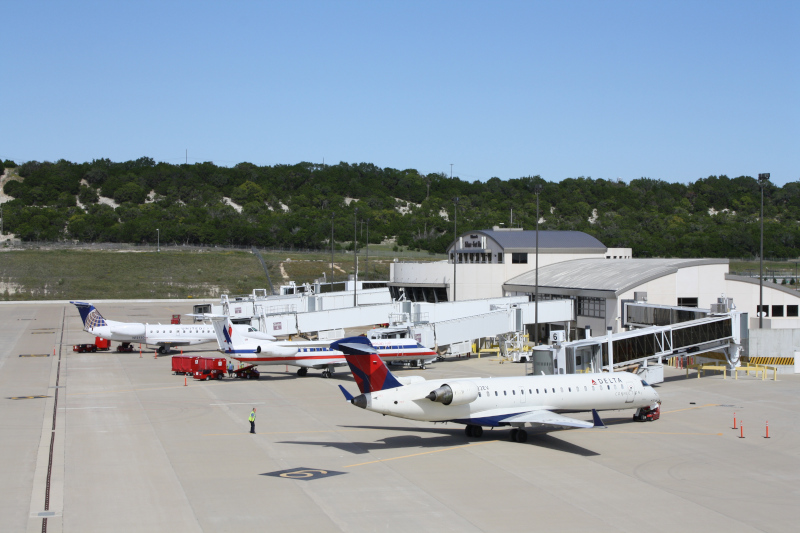 Compared to other airports, that has been a faster recovery to normalcy, “From what I’ve seen, most airports are somewhere around the 60-65 percent recovery rate,” says Wilson. “We’re only 825 enplanements shy of April 2019 enplanements.” The main reason for the faster rebound is because a large majority of travelers through the airport are military-related. In June-July 2020, the army relaxed their travel bans. This meant that the passenger movement started to jump dramatically, month-on-month.

Killeen-Fort Hood Regional Airport was also able to utilize the time well, with less foot traffic going through the terminal. Staff were able to do maintenance work that would never be prioritized during a normal business day. And the airport didn’t have to lay off any employees, thanks to assistance from a CARES Act grant of $2.2 million. The grant also enabled management to waive and defer rents from the car rental companies and stores.

While the world slowed down, staff maintained the airfield. “Even though we had limited passengers, the grass didn’t care, we still needed to maintain the areas,” recalls Pat Hoppaugh, Airport Maintenance Manager. “And there was a switch to more sanitation work, increased hard surface cleaning, and other general cleaning chores, due to COVID-19 protocols.” The maintenance of the airfield is vital to the agreement with the Army, as the airport doesn’t pay for rent – rather it reciprocates by fulfilling services, such as mowing the infields, repairing cracks in in the pavement surfaces, and fixing runway lights and signs.

Moving forward, Killeen-Fort Hood Regional Airport’s three to five-year plan seems to be solidly set. According to Wilson, “We have two main objectives that we are currently working really hard on: air service development, such as adding more direct flights out of Killeen to new hubs, and business development.” These objectives will be achieved by targeting areas such as Denver, increasing passengers coming into the airport, and securing more land from the army for business development.

“One of the main lessons learned from the time during COVID-19 is that if we had all our eggs in one basket, there would have been a real problem at the airport,” says Wilson. “So we’d like to develop about 15 to 20 acres of land from the Army that faces the highway into new developments like a hotel, shopping center, restaurants, and establishments of that nature to diversify our revenue sources.”

Another challenge that the airport would like to overcome is to educate the surrounding community that the airport is not just for military services but also for public use. “We want to get the word out that we service the entire community,” says Jarrod Provost, Airport Operations Manager. “We are a competitive airport and want to draw in more clients from surrounding aviation establishments.” This outreach into the surrounding community has meant that management is taking more active steps.

“I’m going out into the community within the region and meeting leaders and investors who want to support the goals of the airport,” says Roque Aguon, Airport Business Manager. “We want to monetize these partnerships and develop our plans together.”

Airport management is actively engaging with 10 Chambers of Commerce in the Central Texas region on a weekly basis. Aguon was responsible for setting up an Air Service Development Task Force, and he has interacted with numerous companies already. He explains, “They are excited to know, not only do we have a plan to develop our air services, but that we also want to reach out to the community. Make them feel involved… that they are our civilian traffic and that their dollars spent at GRK are working.”

Currently the entire Air Service Development Task Force team meets quarterly to discuss how they can reach across multiple sectors of industry from education to medical and the military. To achieve this, they are preparing to market to a new, larger target demographic across a wider area. “Our airport is within 60 miles of Austin Bergstrom International Airport, which is one of the fastest growing airports in the country,” says Wilson. “However, we’re actually closer to a number of northern suburbs (like Georgetown) in Austin than they are to Austin Bergstrom International Airport, which is in the Southern part of the city. These people could be saving time and gas money by flying through our airport.”

It’s this leakage of potential passengers that has driven the team to earmark the need for more flights and expanding the airport. But with a team as driven as the one at Killeen-Fort Hood Regional Airport, it’s no doubt that things will just keep getting better.

Every day, thousands of soldiers at Fort Hood, Texas report for duty to protect our nation’s sovereignty and advance democracy worldwide. While their experiences are varied, every soldier has stories about courage and heroism, fear and loss, camaraderie and respect, integrity and pride. The National Mounted Warfare Foundation (NMWF) is building a world-class military museum, the National Mounted Warrior Museum (NMWM), in the heart of Texas to honor the history of the units and soldiers who have served at Fort Hood. The museum will share their untold stories and provide historical accounts, giving visitors have the opportunity to learn about the U.S. Army’s role throughout history. A variety of immersive exhibits, multimedia experiences, and educational programs will appeal to people of all ages and bring history to life. Visitors will discover how the role of mounted warfare has evolved, hear personal stories from soldiers, learn about Fort Hood’s history, gain insight through simulations, and find out about the U.S. Army’s efforts supporting peacekeeping and disaster relief missions.

Step into the story. Step into history. Feel what it is like to be a part of something bigger than yourself.