Growing with the city it serves

Rick Husband Amarillo International Airport – named in honor of the late Amarillo native and astronaut Rick Husband – is located in a west Texas city that’s growing quickly. Amarillo’s population has increased nearly five percent since 2010. It’s now approaching the 200,000 mark and has many more visitors each year. One reason for those visits is the Palo Duro Canyon State Park. Only 25 miles from downtown, this 800-foot-deep canyon extends across 30,000 acres. There are about 15,000 acres of trails to hike or bike and a zip line that offers thrill seekers a ride across the chasm.

According to Michael Conner, Director of Aviation at the airport, “It’s probably the largest attraction here in the area. In fact, Palo Duro Canyon visitor numbers (by calendar year) come in at 2020 – 323,360; 2019 – 388,846; 2018 – 398,028; 2017 – 409,507. It’s the second largest canyon in the U.S. so it gets a lot of traffic and it’s a state park, so it’s well cared for. There is camping there and hiking and horseback riding… all kinds of activities, so it’s a pretty visited attraction.” Park visitors have no shortage of options for lodging. In addition to the campsites and cabins at Palo Duro, there are more than 7,000 hotel rooms in Amarillo. And there could soon be more at the airport.

Rick Husband Amarillo International Airport has 300 acres of land available for development, plus another 500 acres nearby that’s owned by the Amarillo Economic Development Corporation. “Between the airport and the Amarillo Economic Development Corporation, we’d really like to have a combination of many things there,” says Conner. “But primarily the projects that we’re entertaining as possibilities include some manufacturing, maybe some research and development opportunities, and a hotel. We’re looking to put a four- or five-star hotel here, since there’s not an actual airport hotel here currently. If you go about a mile and a half up the street, there are some hotels. But nothing that’s really conducive to the business traveler. And so we’d like to put in a higher quality hotel that caters more to the business client, with obvious quick access right to the airport. That would be really great.”

Despite the difficulties of the COVID-19 pandemic and increasing material costs, Rick Husband Amarillo International Airport is expected to open a new, $5 million corporate aircraft executive terminal this summer. Conner explains, “TAC Air, our FBO, has been great in anticipating future needs to ensure that corporate traffic has a good place to call home here in Amarillo with their new terminal, and that’s going to be really exciting when it opens. I got a chance to tour it a few weeks ago in the middle of construction and it looks amazing. It’s got all the modern facilities and the interior looks fantastic. It’s a great place to have as a first view of Amarillo when someone flies in here, whether they are coming from out of the country or just another state.”  The new TAC Air executive terminal is on-track to open in June.

The airport is also in the midst of a $9 million taxiway reconstruction project. Taxiway Papa 4 will be demolished and reconstructed in a new location about 650 feet farther north. Taxiway Juliet will be demolished and reconstructed in its current location. Both of the new taxiways have been designed to meet new Federal Aviation Administration geometry standards. That project is expected to be finished by the end of the year.

Hangar space is hard to come by at Rick Husband Amarillo International Airport, and one tenant is already looking to expand. Flight Mechanics is an up and coming aircraft maintenance company at the airport. They currently lease a hangar and their business is doing very well. Conner shares, “We’re looking at doing some very large, additional development with them. Of course, that’s in a preliminary stage of discussion so I don’t really have many details on it, but if / when it all occurs, then we could have some major maintenance and cargo capability here at the airport, and certainly we’d be ecstatic to have that kind of activity going on. That type of development project brings in additional related activity and gets more people familiar with Rick Husband Amarillo International Airport – where we are, what our capabilities are. Once people are familiar with the airport and the area, it brings people back for vacationing, as a destination.” 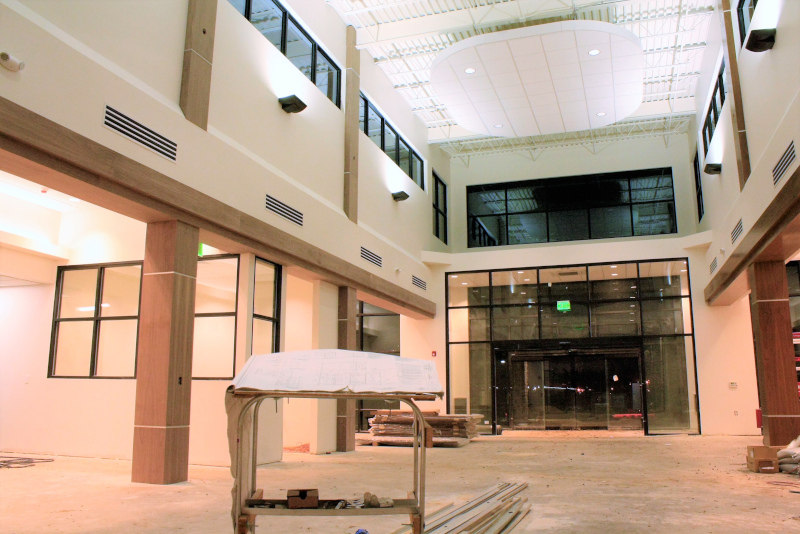 There are plenty of reasons to visit and live in Amarillo. The city has a diverse economy that includes lots of agriculture, a growing technology sector, and plenty of businesses in the energy industry. Sharpened Iron Studios is building film, television, and video production facilities in Amarillo. It has also partnered with Amarillo College to launch a school of cinematic arts.  “This is going to be huge for Amarillo,” Conner said.

When it comes to sports, Amarillo residents love their new minor baseball team, the Sod Poodles. The Double-A affiliate of Major League Baseball’s Arizona Diamondbacks won their league championship in 2019. “It’s one of the best things we’ve got going here in Amarillo, says Conner. “The baseball stadium is right in the middle of downtown and draws great crowds. Most of the inaugural season was sold out. Of course, 2020 for baseball wasn’t a good year anywhere so we will just discard that one. But we’re anticipating some pretty good participation this year, and I think it will keep going. And of course the association with the Diamondbacks has been really great so far. We’re just really looking forward to how that’s going to affect traffic between here and Arizona and other places.”

Amarillo is steadily expanding as a transportation hub for the Texas Panhandle area. In addition to its airport, the city is located along Interstate 40, halfway between Albuquerque, New Mexico, and Oklahoma City, Oklahoma. There is also rail access thanks to the BNSF Railway Company. The airport is looking to increase its own traffic by bringing back some flights that were canceled during the COVID-19 pandemic. A stop in Phoenix, Arizona, could be especially appealing given the Sod Poodle’s relationships with the Diamondbacks.

Whatever the future holds for Rick Husband Amarillo International Airport, it will be based in part on a shared goal. Conner sums it up well in his own passionate way: “So between the airport, the city itself, the Amarillo Economic Development Corporation, the Chamber of Commerce, and several other organizations – and we’ve got our business leaders from highly respected companies, banks and others –  that we’ve all kind of partnered together with to say ‘Hey, we want to make Amarillo a better place and we want to grow this place and we just want to be a really great place for people to live, grow, and have their business.” He adds, “It’s this really great ball of positiveness going on, at least at the moment, so I try to play on that and help it grow. We just want the airport to be a part of that.”

What: A busy commercial and general aviation airport

Where: Potter and Randall Counties, Texas

Flight Mechanix is a premium aircraft service provider focused on the customer and the betterment of their assets. Flight Mechanix offers comprehensive asset management, high quality maintenance, and turn key brokerage services. Our attention to detail and exclusive customer service will leave you confident and satisfied with your ownership experience.