Riverside County is the fourth largest county in California covering over 7,000 square miles with a population of over two million people. With such a huge area under its purview, it comes as no surprise that the county owns and operates not one, but five airports: Blythe Airport, Chiriaco Summit Airport, French Valley Airport, Hemet-Ryan Airport, and the Jacqueline Cochran Regional Airport.

Truth be told, there is a total of 12 airports servicing the area, the county merely runs five. It seems incredible until you stop and look at the locations this county comprises, and that no matter where you live, you have probably heard of these places. Riverside County is roughly a rectangle spanning from the greater Los Angeles area to the Arizona border. It is mostly desert but has what might be seen as the perfect Mediterranean climate. Most of Joshua Tree National Park is located in the county. As well as the resort cities of Palm Springs, Palm Desert, Indian Wells, La Quinta, Rancho Mirage, and Desert Hot Springs – which are all part of the Coachella Valley region of central Riverside County.

Angela Jamison, County Airports Manager, gives some background on the quintet of airports in her charge. She shares, “Four out of the five airports were deeded to the county because they were surplus military bases. French Valley is the exception and we built it in 1989 to replace a former airport that was not designed well in terms of its proximity to mountains and the prevailing wind direction.”

“What we have,” adds Vicki Powszok, Regional Office Manager for Aviation, “is five different airports that are completely different and have different users. I work out of French Valley for example and it is a huge General Aviation airport with over 250 hangars for rent. The reason we attract so many flights is that this is a big wine production area and so people fly in and out to go to the wineries. There are also golf courses and the Pechanga Casino and Resort. Old Town Temecula brings in tourists as well. The Temecula Valley Balloon and Wine Festival brings in well over 100,000 people a year, for example. A lot of people store their balloons here and use French Valley as their base of operations.”

French Valley Airport is in Southwest Riverside County, adjacent to the communities of Temecula, Murrieta, and Winchester. It sits on 261 acres and has a 6,000-foot runway. The airport property offers fixed-wing and helicopter flight training and maintenance facilities, charter flights, avionics repair, upholstery services, hangar space and tie-down rentals, and a full-service restaurant within the terminal. In total, the airport has four flight training schools.

In comparison, the Jacqueline Cochran Regional Airport has a much longer runway, at 8,500 feet in length, which can accommodate a lot more jet traffic. The airport is in Riverside County’s Coachella Valley, surrounded by the communities of Palm Springs, Palm Desert, La Quinta, and Indio, which puts it in convenient proximity to world-class spas and resorts. There are three FBOs on this field offering fuel, maintenance, and hangar rentals.

“Jacqueline Cochran Airport has the California Highway Patrol flying out of it, as well as the Sheriff’s Department,” says Powszok. “But one of the more unique features of this airport is the horse shows. Desert Horse Park has multiple two or three week long competitions where people will fly their horses into one of the larger airports with quarantine facilities, like Los Angeles, but they will be using our airport.” This year, the events are expanding to 18 weeks for the competitions.

Jacqueline Cochran Regional has several big Fixed Base Operators that attract larger jets and corporate clients. According to Powszok, “They come in from, say, their home in the Palm Springs area and they like to fly into our airport because it’s so much easier. We see a lot of celebrities and wealthy people that want to fly in a bit under the radar. Just outside the airport, there is a popular operation called The Thermal Club. They have a racetrack where people can drive high-end vehicles. A lot of people do fly in just to go drive their cars.”

Hemet-Ryan Airport is different again. It is in the San Jacinto Valley and is the mid-region airport that covers 458 acres with a 4,314-foot runway. Hemet-Ryan Aviation is the FBO and offers both Jet A and 100 low lead fuel, along with fixed-wing flight training and maintenance facilities, hangar space, and tie-down rentals. There is also a small café located onsite. In addition, Hemet-Ryan has a sailplane group that comes in and not only teaches, but people with their own plane can take off from Hemet and then glide around the valley. A large Cal-Fire airbase (California Department of Forestry Air Attack Base) is based out of Hemet, as well, and they fight the fires all around the valley. The Sherriff’s Department and Mercy Air, an air ambulance service, also fly out of Hemet.

Another of Riverside County’s five aviation sites, Chiriaco Summit Airport, is located at the summit between the Coachella Valley and Desert Center. It is basically just a landing strip with no facilities. The area surrounding the airport was an important military training installation during World War II. The General Patton Museum, within walking distance of the airport, gives an insightful account of the area’s history. The airport itself was founded in conjunction with General Patton’s training station. There is a tenant who operates a rest stop just off the number 10 Freeway with a gas station, post office, and a restaurant that is reputed to “make a pretty good piece of pie and folks have been known to fly in for a slice.”

Last of the five is Blythe Airport, which is in the far eastern part of the county. Powszok reports, “In Blythe, we have a military parachute training team who train people that are going into combat how to jump out of a helicopter or an airplane and land in specific areas. This program happens around six times a year for three or four weeks at a time. They will bring in 50 or 60 people each time to train. That is the majority of what happens at this airport. The FBO is Patton Aviation and they operate out of a restored World War II hangar, which is the headquarters of the parachute operation, as well.” 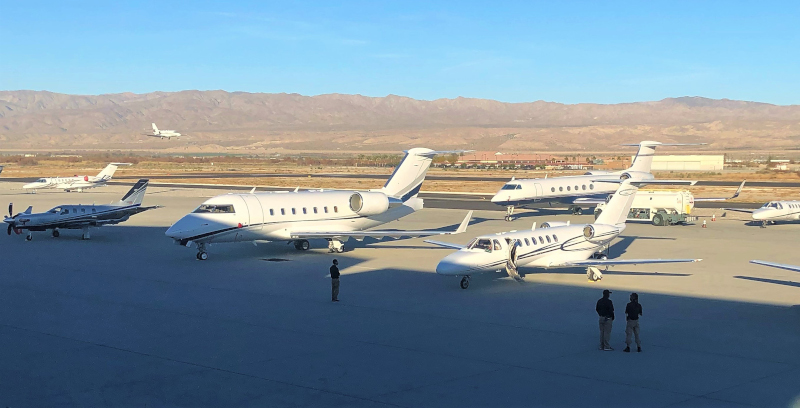 Blythe airport is also home to a 156-acre solar farm, a travel center, the Sheriff’s Department shooting range, and a Customs and Border Patrol facility. It is the largest airport in terms of area, covering 3,904 acres, with a 6562-foot runway.

“In terms of rehabilitation and future development projects,” Jamison chimes in, “we just finished the hangar taxi lane rehabilitation at Jacqueline Cochran, which was a relatively large project. We are just in the planning phase for some asphalt rehabilitation at Hemet. That is sort of ongoing when you have five airports, but we are taking a really serious interest now in our pavements, trying to make sure that we maintain and extend the useful life and provide the very best possible facilities for pilots.”

Jamison is passionate about her role and the opportunity for Riverside County’s airports to contribute more to the region in the future. She shares, “We desire to be the foremost vital economic engine for the county and to bring in tourism and business development for the area. We have also applied to the FAA for control towers at both French Valley and Jacqueline Cochran. This will help further increase safety at the airports. We have also applied for a user fee Customs and Border patrol facility for Jacqueline Cochran and that would really help us in being able to process international flights and further develop that region. The future looks very bright.”

Where: Riverside County in the Coachella Valley Region of California

Chiriaco Summit was founded in 1933 by Joseph & Ruth Chiriaco, since then it has grown into the wonderful community you see today, and is still expanding with motel and mobile home extension coming soon. So stop by and say hello to the 4th generation of Chiriaco’s when you Visit.