Rogue Valley International-Medford Airport recently published a Master Plan to bring them forward to the year 2040. In that plan, there was a median forecast of around two and a half percent commercial and one percent general aviation growth over the next decade. This sounds small at first but consider a worldwide pandemic and a problematic national economy and you can see that the airport is witnessing unprecedented success.

Medford, Oregon began life in the late 1800s when the California Oregon Railroad chose this route to connect the states. It began as a lumber town but has developed over the years to include agriculture, tourism, and now its greatest employment is in the medical industry. 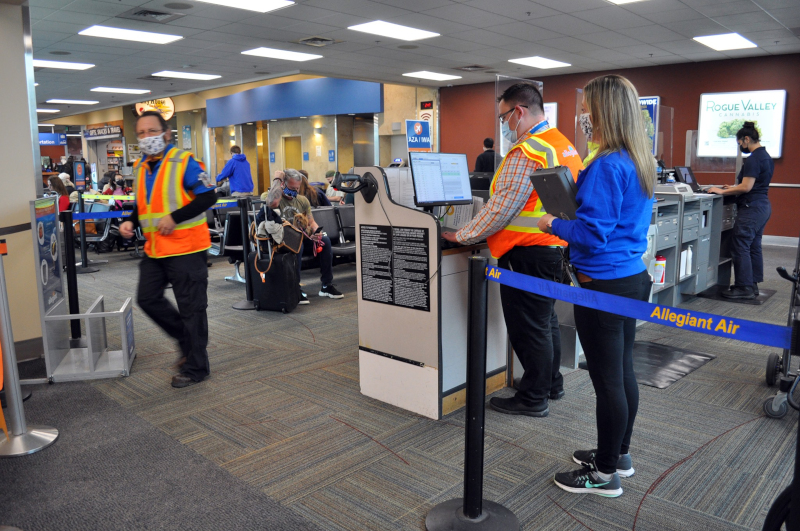 “Today, Medford is a good size city with a little over 80,000 people,” explains Jason Foster, Air Service & Economic Development Manager, “plus there are 250,000 people within a one-hour drive of the airport and 750,000 people within a 2-hour drive. It is also a fairly remote and isolated location that connects Southern Oregon with Northern California; a four-and-a-half-hour drive to Portland and five and a half to Sacramento. ”If your organization relies on air cargo, and you are located in Northern California or Southern Oregon, then you are relying on Medford Airport to be open for business” says Jerry Brienza, Airport Director.

“We are a huge economic driver for the region and work closely with the city to promote and connect the community to other parts of the country and the world,” explains Foster, further. “Tourism is a big part of the economy as well, and even though it took a hit with COVID, the region is known primarily for its outdoor activities and  recreation, so it was still possible to take advantage of our local tourism industry such as guided winery tours, fishing, camping, hiking, biking, zip-lining, and the national parks.”

The first airport in the Medford area goes back to 1922, when it was a landing field for the U.S. Forestry Department. The field was then leased for four years to the Pacific Air Transport Company, and in 1930, the Medford Municipal Airport began operation as a state-of-the-art facility. It was not until 1971 that ownership was transferred from the City of Medford to Jackson County. Then in 1994 the airport was granted a Foreign Trade Zone, and the current iteration as the Rogue Valley International-Medford Airport began.

“When you look at us today,” says Foster, “we have a 110,000-sq.-ft. terminal building with a main concourse and an open air observation deck and a restaurant on the second floor, and the first floor has a gift shop for both the public and screened passengers. We have six main gates and thirteen ground loading gates, and in of June 2020, we added our second passenger loading bridge. This second bridge enables us to accommodate the larger aircraft safely and efficiently. Prior to COVID, we were projecting two million passengers per year by 2040 – and that means meeting the demands of our airline partners.”

Rogue Valley International-Medford Airport, operated by the Jackson County Airport Authority, employs between 40 and 50 people and offers five on-site and one off-site car rental agencies. All told, the airport accounts for $74 million in terms of local payroll. It is considered an Enterprise Fund and must be self-supporting according to FAA regulations. Covering 938 acres at an elevation of 1,335 feet with an 8,800-foot runway, Rogue Valley International was recently reclassified as a Small Hub Airport and prior to COVID was already servicing over a million passengers a year. It is the third busiest airport in Oregon and home to around 200 GA aircraft with, of course, a waiting list.

According to Foster, “We have two FBOs – Jet Center and Million Air – and commercial service from Alaska Airlines, Allegiant Air, American Airlines, Delta Airlines, and United Airlines; with UPS cargo by Ameriflight, and FedEx cargo. In fact, our airport did not lose a single direct route or destination during the pandemic. We maintained all our destinations and actually gained San Diego, and the new John Wayne Airport in Orange County just started service with us through Allegiant on February 12th. Alaska Airlines also resumed flights to LAX which they had pulled back in 2017. Our numbers were down around 53% last year, but we did pretty well compared to other airports nationwide.”

The terminal at Rogue Valley International-Medford Airport was already a very clean and modern facility but with the pandemic in mind, they stepped it up a few notches; increasing the frequency of cleaning and fogging, spacing the seats out for social distancing, new mask and sneeze guard regulations, as well as industrial HEPA air scrubbers throughout. Cleaning products were upgraded to hospital-grade and electrostatic sprayers were brought in. “We wanted to make sure that we used CDC recommended products and every touchpoint was clean and sanitized,” says Foster. “What we are hoping is that everyone, the people coming and going as well as our employees, can really feel safe travelling through or working in the airport.” 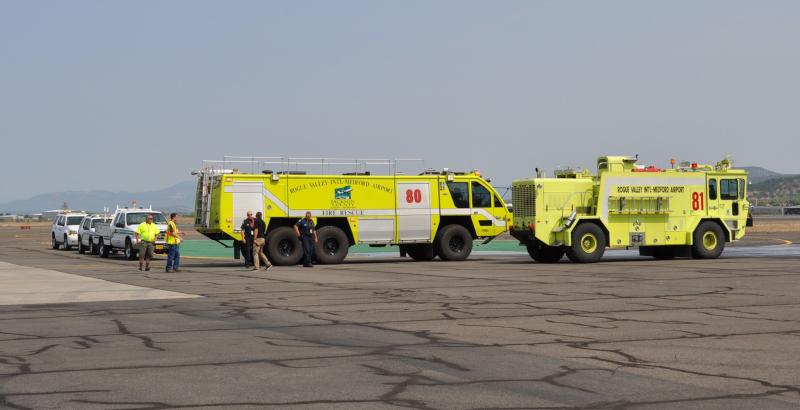 Creating a Master Plan that envisions how an airport moves into the future takes a lot of work and requires multiple approaches, and Mead & Hunt has been instrumental in coordinating this Rogue Valley International-Medford Airport planning project. Two additional companies who have been largely involved in projects at the Airport are Environmental Science Associates (ESA) and Precision Approach Engineering. Land expansion in the area around the airport requires environmental studies for a variety of reasons, from landslide to impact on faery shrimp pools, while Precision Engineering has helped the airport out on a lot of necessary projects such as the largest project for 2021, a detention pond for stormwater runoff. “It’s not the most exciting project,” quips Foster, “but it is necessary, and these two companies ensure that the work gets done in accordance with the various regulations, and that it gets done to the satisfaction of the County.”

Foster reports, “Phase two of the taxiway rehab project was completed in late 2020 and it went very well. We have now completed improvements to all County-owned general aviation hangar complexes. The County conducted a search for a hotel developer on Airport owned property, but that was put on hold due to the pandemic but we have since resumed discussions. We are also starting a feasibility study for a new gas station and convenience store on another Airport development site. We feel that it is a really great location considering our rental car pick up and return being close by. It is also a very highly trafficked intersection. There’s a lot of businesses in the immediate area  that might need a snack for breakfast or lunch, or a good cup of coffee, or simply need to get fuel. And, of course, it will help generate revenue for the airport as well.”

Last February, they also closed the deal on 38 acres of land on the east side of the airport adjacent to the new Rogue Valley Expressway in hopes of future development. The idea would be to seek interest for a manufacturing organization, or perhaps industrial and office park use. Foster points out that this area is also adjacent to the foreign trade zone, which is not being used at the time but could be re-opened to facilitate new development.

“One of the projects we have finished recently that I am really proud of is a new information desk and visitor information centre,” Foster shares. “It is state of the art and allows you to electronically access everything you need to know about Medford – whether you are coming here for business or pleasure. It has touch screen technology as well as digital advertising; it’s very interactive and is just a great addition. There have been some other upgrades and enhancements to the terminal as well – like a third lane TSA with upgraded CT machines to use as a pre-check lane. This will greatly improve traffic flow for passengers.”

He adds, “What I love most about our airport, and it is one of the things I love the most about Rogue Valley, is the people. They genuinely care. Our staff consists of people who want to help you, and genuinely care for and try to attend to your needs. Rogue Valley International-Medford Airport is not only a convenient option for all your business and recreational travel, it is also the gateway to one of the most wonderful places you can be.”

What: A progressive, public-use airport

Salem Municipal Airport – Getting from A to B