Like many of the airports in Florida, the Bartow Executive Airport in Polk County was originally built as a World War II air base. It opened in 1943 as the Bartow Army Air Field, and it operated as a fighter replacement training station for P-51 Mustangs until 1945, when it was briefly turned over to a civilian operator. In 1951, the Air Force retook possession of the airfield, and operated it as the Bartow Air Base, a primary pilot training facility for T-6 Texans, T-28 Trojans, T-34 Mentors, and T-37 Talons.

When the Air Base closed in 1961, the ownership was transferred to the City of Bartow. In 1964, the city requested authority from the Federal Aviation Administration to convert a large building area into an industrial park and in 1967, the Bartow Municipal Airport Development Authority was established. Today, the Authority operates both the airport and the industrial park, as well as serving as the primary fixed-base operator for the airfield, as well as its well-regarded flight school. While the Airport does receive some funding from the federal and state governments for capital projects, it operates self-sufficiently from fuel sales and revenues from aviation and industrial park tenants that lease hangars and buildings. 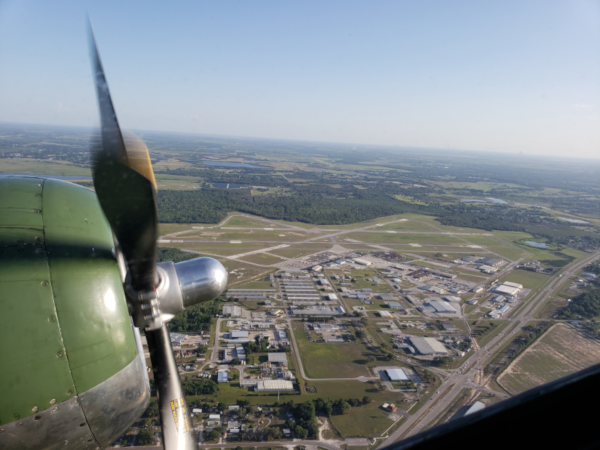 Bartow Executive Airport sees approximately 40-50,000 operations a year, ranging from small, single engine aircraft to large corporate jets. “We have three active runways on this airfield, which is rare for a general aviation airport. Our primary runway is 5,000 feet long and 150 feet wide,” says Executive Director, John Helms. “We have an operating control tower on the field that’s completely privatized. We have fully-licensed and certified air traffic controllers, but they are our employees – they work for the Airport Authority. And we’re probably operating one of the oldest, still active, control towers in the country, dating back to the war era.”

“We have 27 employees as part of the Airport Authority, and to this day, we continue that long tradition as a primary pilot training facility,” Helms adds. “We’re a pretty unique operation. We’re one of those medium-level, general aviation airports with an equally large industrial park, so it’s a very dynamic operation. It’s different than the majority of general aviation airports and even some commercial services airports.”

Airside businesses at the Airport include three maintenance facilities, an aircraft painting facility, two medivac helicopter companies, the Polk County Sheriff’s Aviation Unit, mosquito control, and the Bartow Flying Service (operated by the Airport Authority) which provides line service, fuel, and flight training. “In the industrial park, we have over 60 buildings that we own and operate and lease out to multiple businesses,” Helms reports. “The industries vary from steel manufacturing to car customization; we have a plastic recycling center and county government facilities. And we’re a true multi-modal hub in the area. We have a trucking facility and we have multiple rail spurs.”

Recently, the Airport obtained funding for an intermodal rail center for the transloading of freight at the industrial park. It will include a community rail dock and truck loading facility, as well as additional rail lines. “That’s kind of our big project for next year,” says Helms. “It will improve the intermodal function of the industrial park, tying highway, rail, and aviation all together. The funding is lined up and we’re working with the railroad to get that project going.”

A recently completed project at Bartow was the implementation of an Automatic Dependent Surveillance-Broadcast, or ADS-B, system – a technology in which an aircraft determines its position via satellite navigation and periodically broadcasts it, enabling it to be tracked. The information can be received by air traffic control ground stations as a replacement for secondary surveillance radar, as no interrogation signal is needed from the ground. It can also be received by other aircraft to provide situational awareness and allow for self-separation.

“This is our alternative to looking out the window with binoculars,” says Helms. “We don’t have radar here, so it provides air traffic control with an additional layer of awareness. It’s helpful in that it does provide a little bit of relief to the pilots, but we can’t rely on it because not every aircraft is equipped yet. But we implemented ADS-B into our tower and all of our aircraft that we own (rental and flight instruction), which is nice, because as soon as our aircraft lift off, we can track them wherever they go, in real time.”

A major project for the near future will incorporate the conversion of 20 acres of what used to be a concrete parking apron, used since the 1960s as part of the industrial park. “We’re transitioning those 20 acres of pavement back into aviation for airport development,” Helms explains. “That will be coming online in 2021, once the current lease expires. It’s going to be used for aircraft parking and developable space for aviation business. We’re going to split it into land lease units for businesses or private owners to build aircraft hangars and it already has airfield access. Normally, at most airports, if a private developer wants to build a hangar, for whatever purpose, they would have to build a hangar, a taxiway that gives them access to the main taxiways, and they would have to build a parking apron and ramp area in front of that hangar for pulling the aircraft in and out of the hangar; whereas here, all they would have to do is just build the hangar. And we have enough space to build several hangars around that area.”

“Another reason for adding in that area is because we’re at 100-percent occupancy and we don’t have any property readily available for airside development,” Helms continues. “We’re using ramp area for aircraft that would normally want to be located in a hangar. They’re waiting for that extra ramp area to open up so that hangars can be constructed to accommodate them. It’s kind of hard to grow when there’s no room at the inn, so to speak. So, transitioning that part of the industrial park back into aviation is much-needed. That’s a pretty big project for the airside, and a major game changer for aviation development on the Airport.”

Helms adds that while the Airport generally builds smaller hangars, itself, these potential new hangars will be privately developed. “These are going to be larger-scale hangars than what we would typically invest in,” he notes. “Normally, we build smaller executive hangars – something less than 10,000 square feet. For this, we’re targeting 20,000 square feet and larger, so that’s something we would seek private development for, as opposed to using public funds.”

Other items on the Airport’s long-term agenda include a terminal apron expansion. “We’re trying to get more offseason corporate jet activity at the Airport, and during our busy season, our ramp completely fills up,” says Terry Beacham, Bartow’s Deputy Executive Director. “Longer term, maybe five to seven years out, we’re looking at a runway extension, which would allow us to get a little bit larger aircraft in. We’re also looking at some improvement on the airside for convenience – building connecting taxiways to make the airfield more efficient. In addition, we’re always doing rehabilitation projects because we have so much pavement and it’s a major challenge to keep up with that. We’re constantly trying to get more funding to rehab pavement and refurbish our industrial park buildings, which also date back to the World War II era.”

In order to more concisely represent the Airport to the general and flying public, Bartow recently changed its name from the Bartow Municipal Airport to the Bartow Executive Airport. “The level of service that we offer at the Airport, as a full-service FBO and jetport, wasn’t reflected in our name,” Helms states. “Being the Bartow Municipal Airport gives the community the mindset of a small, local, publicly-owned operation, and because we run a full-service, fixed-base operation with executive level capabilities, we wanted the name to reflect that more accurately. So, we changed the name from Municipal to Bartow Executive.”

One thing that hasn’t changed at the newly-christened facility is the Airport’s fealty to its military heritage and its history as training base for pilots. Forty years after the deactivation of Bartow Air Base, a retired USAF T-37 was loaned to the city and the Airport by the National Museum of the United States Air Force and placed on a permanent, static display pylon as a memorial to the former U.S. Army Air Forces and U.S. Air Force presence at Bartow. The T-37 is near the former air base main gate, now the Airport entrance, and the Bartow Air Base Historical Museum occupies a room in the Airport’s main terminal building. And today, the Airport continues its legacy as a primary pilot training facility as it was during WWII.

WHO: The Bartow Executive Airport

WHAT: A municipally-owned, regional airport

Leesburg International Airport – An economic engine for the region

Fort Lauderdale, Florida and FXE – Welcome to a piece of paradise