The centre of aviation education

Originally a small railroad town on the line from Macon, the City of Eastman, Georgia has a tasty history as the birthplace of Stuckey’s Convenience Stores – think the Pecan Roll and many other delicious pecan treats. Coincidentally, it was the Stuckey family that saw the need to build an airport and, thus, the Heart of Georgia Regional Airport was born.

In 1966, Heart of Georgia became the first regional airport in the state to be able to handle corporate jet traffic; eventually lengthening their single runway to 6500 feet. The airport still serves the Eastman corporate and general aviation needs, but it has also become the centre of aviation education in Georgia, as the home of the Middle Georgia State University’s Aviation Center where they train pilots, Heart of Georgia Regional Airport managers, and offer programs in maintenance and traffic control management.

The big news lately, components for the James Webb Space Telescope were created at the University’s campus on the airfield, while other components are produced at some of the businesses on the field, such as Valence Technologies, which puts a special coating on multiple aeronautic applications including parts of the space station. This work is at the crux of what makes Heart of Georgia Regional Airport so important. 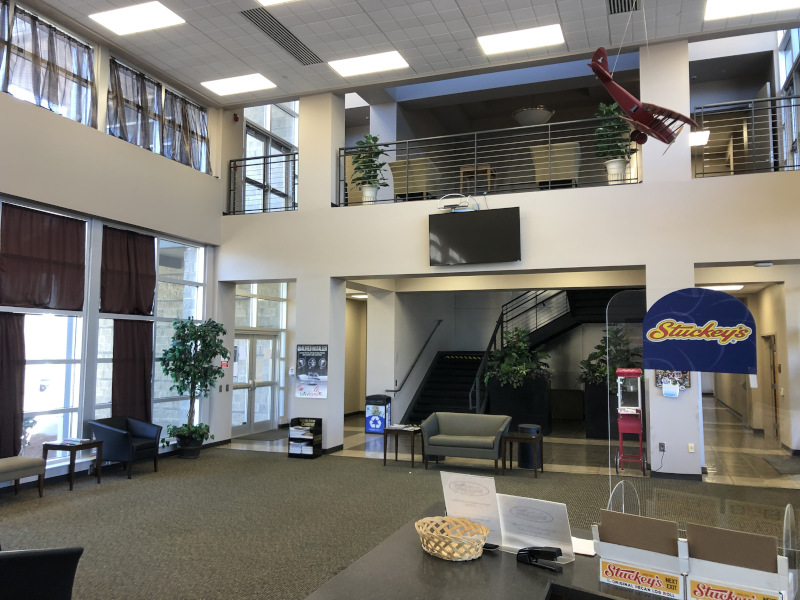 The Airport Authority operates as its own FBO, and in the last few years has upgraded everything from holding tanks to pumps. The fuel is supplied by Perry Brothers Aviation and is available for both Jet-A and GA Fuel 24 hours a day. “This is a community airport,” says Heart of Georgia Regional Airport Manager Jeff Fordham, “and it operates with a seven-member Board of Directors. There are two members from the Eastman City Council, two members from the Dodge County Board Commissioners Office, and two members from the Dodge County-Eastman Development Authority. Then the Georgia House of Representatives appoints a member.” They collectively help promote the airport in several ways. For example, before COVID they held an annual 5K Runway Run that was very popular and they hope to start that back up again in the near future.

The airport was recently awarded $8 million in infrastructure grants and they are in the process of getting some of those projects ready. For example, core samples and engineering studies were done under the purview of the engineering firm of record, Michael Baker International, to enable the runway and taxiways to be completely redone. Fordham reports, “Some of it will be re-milled and some just resurfaced. We are working to overcome water issues between the hangars, and we are looking at what needs to be increased. We have procured some land for new hangars, so we are just trying to figure out how to fit it all together.”

He goes on to point out that the logistics of repairing the runway are not as easy as one might hope. The University itself accounts for several hundred operations a day. On top of that, there are corporate users such as Fordham Aviation Inc.; KENCOA Aerospace LLC; AREMAC Heat Treating who collectively service, manufacture, heat treat and surface engines and parts for Boeing, Airbus, Lockheed-Martin, Gulfstream, and Sikorsky. Then there are the private owners.

“The runway project will get started late summer, and we are trying to get everything ready so that we can start construction and then reduce the impact on the University and other users,” says Fordham. “I believe we would have up to eight days before they would need a contingency plan – we would like to work with everyone, including the FAA, to minimize any problems that we might cause. It would be a lot easier if the school did not have to switch its flights to Macon and then bus all the students up there. But we will see what happens.” 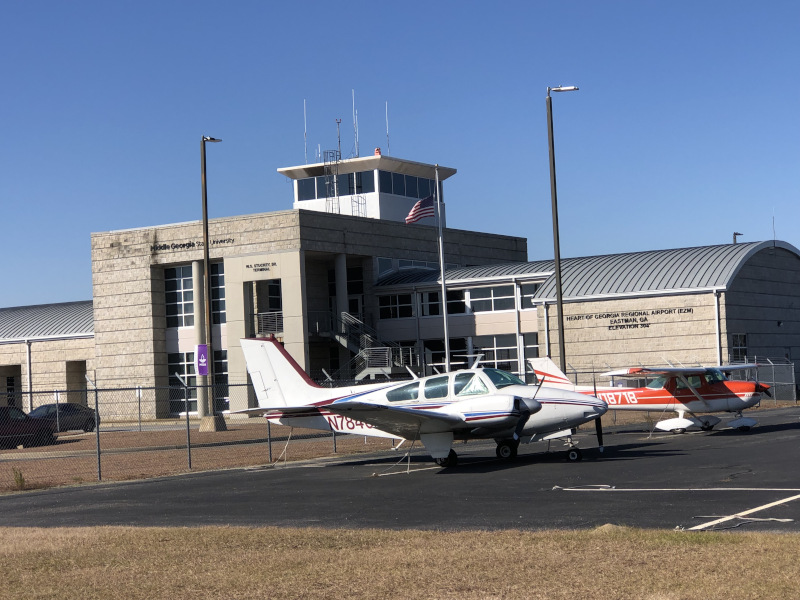 The university currently accounts for about 85% of the airport traffic. Fordham reports, “We have probably more than 400 operations daily, and that is including corporate, military, and general aviation. We also have an air ambulance service that flies out of here. Georgia Forestry has an operation base here as well, and they fly out daily. All of which means a lot of use, and right now the tower is only open during school hours.” Monday to Thursday 8 A.M. to 4 P.M. and on Friday 8 A.M. to 12 P.M., to be more precise. Not only is the tower just open during these times, but it is also staffed by the University, not the airport or the FAA. The airport is therefore also going after funding to have the FAA take over running the tower – to relieve the financial burden for the school and, more importantly, increase the working hours of the runway, by running the tower 24/7.

While there are 80 planes housed at the Heart of Georgia Regional Airport, there are less than 80 hangar spaces available. So, another portion of the planned upgrades includes more hangar space. The university is building some, but the airport also plans on putting in more space, especially corporate and jet hangars. “We have people looking,” explains Fordham, “so we know when we build them, they are going to be filled. That is why we are looking at increasing our taxiway space when we do the paving, and opening more land for hangars, either for us to build on, or to do land lease deals.”

Looking to the future, Fordham adds, “I think more hangars would be the first thing that comes to mind on a wish list. Where we are at capacity now and where we are trying to increase our usage, this is a big obstacle. We have people now who only have tie-downs and I am convinced that we would have a lot more aircraft based out of here if we only had the room. We do have a lot of unused lands and that is one of our biggest assets here at the Heart of Georgia Regional Airport. There are several lots that would be over 100 acres, and there is room for some bigger companies to create large corporate hangars. So, there is a lot of potential here, and to be honest, there is also a good labor supply in the area, and that makes it quite an attractive option, as well. If you had an aircraft manufacturer here, for example, you would have labor, pilots, mechanics… everyone you need would be trained right onsite. It would be a win-win.”

What: A general aviation airport

Where: Three miles east of the town of Eastman in South Central Georgia