Not just a small country airport

The Airport also provides several community-based services and programs, including police and fire support, medical flights, pipeline and wildfire patrols, and Civil Air Patrol search and rescue. Last October, the Airport was the site for more than 135 children with special needs and their families for a free day at the Airport to experience flight. Organized by the nonprofit, Challenge Air, the Fly Day event provided the opportunity for the participants to co-pilot an aircraft and showed how the Airport plays an integral part in spreading community pride.

Initially built in 1975, the Airport was privately-owned and known as the Phil L. Hudson Municipal Airport; it had a 4,000 by 50-foot runway. In 1983, the City of Mesquite purchased the Airport using grant money from the Federal Aviation Administration (FAA). “There were only a few hangars out here, but the City saw that there was a good amount of potential in it, so they decided to bring it under the municipality,” says General Manager, Eric Pratt.

In 1985, additional federal grants allowed the City to enlarge the runway to 5,000 by 100 feet, extend the parallel taxiway, and acquire more airport property. In 1992, the runway underwent refurbishment and expanded to 5,999 feet, and the City officially opened the Airport’s FBO. In 2013, the Airport added an 80-foot-tall air traffic control tower at the cost of $2.8 million and permanently staffed it with FAA contractual air traffic controllers. The Airport itself has 11 employees: five full-time and six part-time. As of this year, the Airport is fully self-sufficient.

Current aircraft based at the Airport include six jets, one helicopter, and 21 multi-engine planes ranging from Senecas to King Airs.  Additionally the Airport is home to 187 single-engine aircraft ranging from experimental up to a PC-12. “We have a waiting list for hangar space with a little over a hundred aircraft, and that list includes about seven jets,” notes Pratt. “Right now, we have been successful in striking deals with developers to build facilities on ground leases. But, with the City of Mesquite also running the FBO services, we are looking at building hangars for our operation as well.”

Those possible new hangars will not only attract more tenants to the airfield, but will also allow for transient aircraft to be able to protect their planes in the event of a thunderstorm or other harsh weather conditions.

When it comes to competing with other nearby facilities, fuel is a huge factor. “Owning an aircraft is not a cheap endeavor,” explains Pratt.  “So whenever somebody’s flying into the Dallas/Ft. Worth Metroplex, fuel is one of the things that they take into consideration.” The Airport offers full-service and self-serve 100 Low Lead as well as Jet A, which it keeps priced relatively low in order to make it a good option for aircraft owners. Additionally, the Airport offers several tiered discounts on Jet A which operators consider when looking at fuel pricing. This incentive is to entice operators to come to see Mesquite instead of going to other well-known airports in the Metroplex. Because the Airport does run a full-service FBO, it can offer additional services including rental cars for guests and equipment available to take care of any repairs.

“Whenever you look at the corporate side, I’d say we do compete a little bit with Dallas Love Field, as well as Addison and Dallas Executive, mainly for business traffic that’s on the east side of Dallas, because location is a huge factor for these operators,” says Pratt. “They pick airports in order to make sure that they’re getting that CEO or executive as close to a site as they possibly can.” 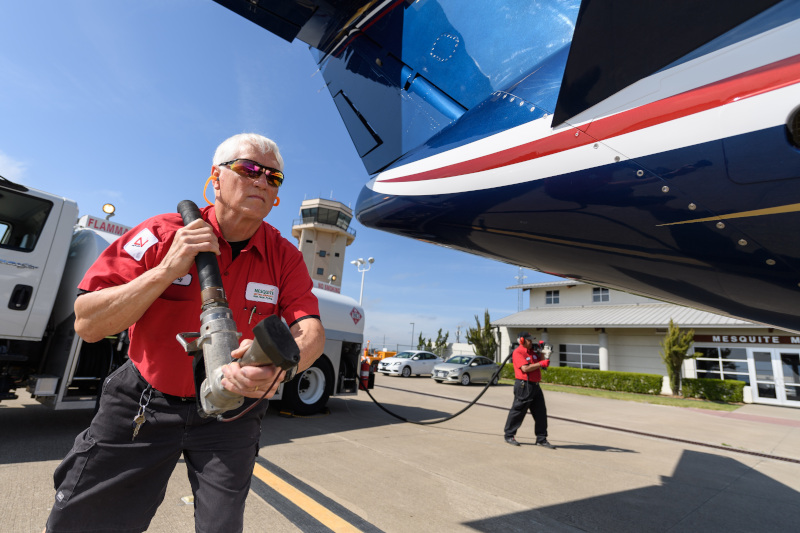 The real competitive advantage of the Mesquite Metro Airport is the fact that they are under the Class B airspace (Class B airspace extends from the surface to, generally, 10,000 feet), which makes it extremely easy to get in and out. There are no delays and no wait time on the ramp.

Looking toward the future, the Airport is putting together a new master plan. The FAA requires airport master plans every 20 years. The Mesquite Metro Airport completed one in 2004 and updated it in 2007. Pratt suggests that due to the growth in the Dallas/Ft. Worth Metroplex now is the appropriate time to go back and redo the plan. While waiting for this study to be funded, and ultimately completed, the Airport is proceeding with the previously mentioned hangars for the FBO and looking to fix some drainage channels in order to get water off the property as quickly as possible. Other projects include the construction of two taxi lanes on the west side of the property, a switch in its fuel provider from AvFuel to Shell, and a rebranding that includes a new logo for the Airport FBO services.

Should the Airport wish to expand its footprint sometime in the future, Pratt says that there are about 45 acres that it currently owns that are developable. “If we’re looking at additional land, we’d have to go to the east side of the facility,” he notes. “There are about 260 acres on that side that would be ideal for airport development, but the state has a planned extension to the George Bush Turnpike, or State Highway 190, that will go right through that property, which cuts it down to about 70 acres that would be usable for our purposes.” Those future purposes might include a city-owned industrial district adjacent to the Airport, with high-tech, aviation-related development, creating both good-paying jobs while bolstering the City’s tax base.

“There’s just a tremendous amount of potential here,” Pratt adds. “And the biggest advantage that we have going forward, over a lot of our competitors in the Dallas/Ft. Worth Metroplex, is the fact that we have green space available to develop and investors will not have the additional cost associated with a redevelopment project.”

The biggest misconception that people have about Mesquite Metro Airport is that it is merely a small country airport. That might have been the case a long time ago, but with the 6,000-foot runway that can handle 100,000 pounds, the Airport can welcome major aircraft like Gulfstream G-650s.

“Our goal is to make this a place where a pilot is proud to take his boss. We do see a few Fortune 500 companies that come in and out throughout the year, and we treat them the same as someone who pulls up in a Cessna-150. We make sure that everybody gets that first-class service and gets treated the way that they should be,” asserts Pratt. “And, hopefully, they’ll come back and spread the great word about us and our operation.”

The Mesquite Metro Airport has a bright future as it continues its transition from a recreational facility to a thriving airport for both leisure and business aviators.

WHO: The Mesquite Metro Airport

WHAT: A public use airport,

The Del Rio International Airport – Convenience at the border