The Indiana County Jimmy Stewart Airport is a county-owned, general aviation airport located two miles east of the borough of Indiana, in Indiana County, Pennsylvania, and about 65 miles northeast of Pittsburgh. The Airport is named for Indiana’s native son, Jimmy Stewart, best known as an Academy Award-winning actor, who also served as a squadron commander in the U.S. Army Air Corps and flew 20 combat missions in Europe during World War II. He remained in the Air Force Reserve after the war and retired in 1968 as a brigadier general.

The Indiana County Airport covers 276 acres and has one asphalt runway, measuring 5,500 X 100 feet. It is classified as a business service airport by the Pennsylvania Bureau of Aviation and is a public-use facility serving local corporate, education, and private aviation needs. The terminal building was placed into service in 1997 and provides facilities and amenities for pilots and fliers including a lounge and locker room. Located at the interchange of U.S. Route 119 and State Route 286, the Airport also gives travelers fast and direct access to other communities and neighboring counties. The Airport is also the headquarters for the Jimmy Stewart Squadron 714 of the Civil Air Patrol, which provides aviation and service training for area youths and keeps a team of fliers at the ready for emergencies such as disaster relief and search missions. 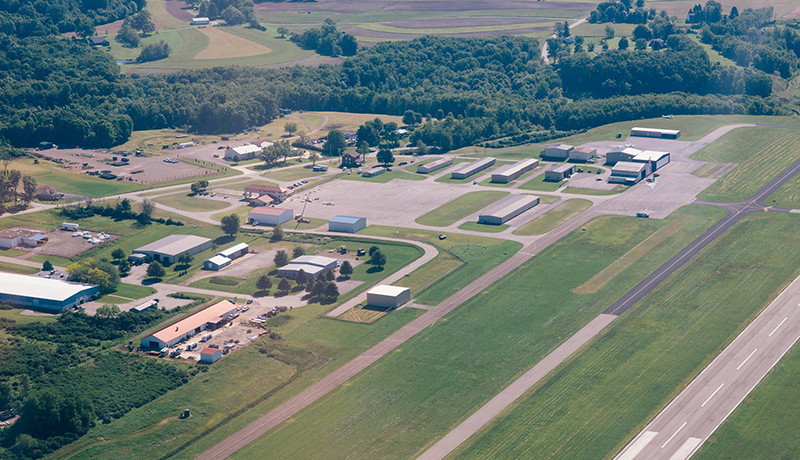 Flanking the airfield is the Jimmy Stewart Airport Business Park, a 10-acre corporate and light industrial site offering Keystone Opportunity Expansion Zone program tax incentives for developers and tenants. The Airport is only minutes away from Indiana University of Pennsylvania, Indiana Regional Medical Center, area hospitality facilities, the downtown Indiana business district, the corporate headquarters of several financial and medical businesses, and the regional offices of many energy companies. Thus, it is a prime location for regional services and others that rely on convenient air travel.

The Airport is also home to 42 GA aircraft. Some years ago, it also supported a small charter service, and Airport Manager, Rick Fuellner, says he would like to get something of that nature back again, in order to better compete with some nearby airfields. “We are in the infant stages of talking with some carriers to get a regional type of jet in here – something that can get you to the major hubs,” he reports. “One of the local airports, a competitor, just changed carriers and there’s a possibility we may be picking up their old carrier and get them based here.”

Another competitive challenge, according to Fuellner, is that about a year ago, the Airport lost its avionics shop and mechanics facility when its operators retired. “That has had a huge effect on traffic here,” he opines. The good news is that the void may soon be filled by Innovative Aviation, the flight school on property. “I’ve been working very closely with the owner who has connections in the aviation world for mechanics and an avionics person,” Fuellner says. “And I suspect, that by the end of the year, it’ll be in place and we will have an avionics shop, as well as a new A&P mechanics facility here at the Airport.”

Fuellner adds that Innovative Aviation has also reached out to a major university with the notion of partnering with the college, which will offer an off-campus, flight training school for both in-house and online learning. “They are talking through the permit and review process to have those folks set up a shop here,” he notes. “With that, Innovation Aviation is also talking about an addition to their building that would accommodate this new school, as well as an addition for a bigger fleet of aircraft.”

Other plans for the Airport include constructing a new corporate hangar, and possibly an EMS facility. “There’s a local businessman who we’re talking with,” says Fuellner. “We’ve seen some plans and heard his ideas about a 100’ X 100’ corporate hangar. So, I’m excited about that. And there’s a potential for that to come into play within the next year. The EMS facility is going to be studied in our Master Plan, which we just started early this year. The process will take about another seven to ten months before we see any results, like what ground can be utilized for it, as well as where the potential funding can come from for a facility like that.”

Another part of the Master Plan concerns a piece of land outside the Airport that the county is looking to purchase in order to increase the Airport’s footprint. Potential uses for the land include creating a hub for a regional carrier or a cargo operator, or possibly as an air business park. “We’re surrounded by different types of businesses, and the majority of them utilize the Airport in one way or another,” Fuellner says. “But we’re looking to expand that and, hopefully, draw in more aviation-oriented businesses – something that we can actually put a taxiway to their building to give them access to the runway. So, that will probably be a pretty extensive part of our Master Plan study.”

Finally, Fuellner reports that a contactless, self-serve fuel system is going to be installed by the end of this year. “People can come in after hours and still get fuel,” he states. “We’re also going to get a new jet truck. So, we’re moving along and making things happen.” 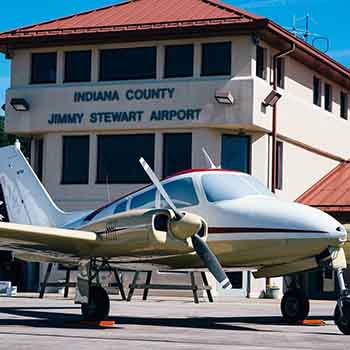 Regarding things that happen: each June, the Airport holds the Jimmy Stewart Air Show (formerly called the Jimmy Stewart Festival), which features visiting aircraft, often including World War II vintage military planes for hands-on, educational opportunities. Area pilots display their contemporary aircraft, some offering aerial tours of the Indiana County area for festival goers. In addition, the airport hangar is available as a community event center and has held events such as fly-in breakfasts. “We had to cancel the Air Show, this year, because of COVID,” Fuellner laments. “But we are in the process of planning it for next year in July. We have been holding fly-in breakfasts once a month. They’ve been well-attended; we have anywhere from 12 to 35 airplanes fly in. But with the weather changing, Octobers was probably our last one for the year.”

There is, however, one permanent item at the Indiana County Jimmy Stewart Airport, and it’s something that Fuellner is understandably proud of. “About five-and-a-half years ago, the Airport acquired an airplane that was owned by Jimmy Stewart – a 1961 Cessna 310,” he recounts. “That airplane was restored by our local EAA chapter and then it was erected out front of the Airport on a pedestal. It’s at a bank angle and it weathervanes, so the propeller spins in the wind, and the navigation lights work after dark because it has a solar panel on it. I believe it’s the only one in the country that is on a bank angle and weathervanes at the same time. There are a lot that weathervane, but they’re flat, and some are on a bank angle, but they don’t move. So, it’s a very unique plane and an amazing structure.”

Fuellner points out that, as the Airport continues to evolve, kudos go to Indiana County’s Board of County Commissioners, as well as the Indiana County Development Corporation. “That whole team is fantastic to work with,” he states. “They’re interested in seeing the Airport grow and I’m so lucky to be a part of it.”