Charting a path for the future

The Wittman Regional Airport is a general aviation airport located two miles south of the central business district of Oshkosh, a city in Winnebago County, Wisconsin. It was originally founded in 1927 as the Oshkosh Airport and then became the Winnebago County Regional Airport in the early 1930s, after it was obtained by the county. “In 1931, Steve Wittman arrived in Oshkosh. He was a renowned aircraft designer, racer, and aviation pioneer,” recounts Airport Director, Jim Schell. “He ended up becoming the Airport’s first manager and he continued to serve in that capacity until 1969. Upon his retirement, the Airport was renamed in his honor. Steve had many major achievements in his career, and he was instrumental in bringing the Experimental Aircraft Association (EAA) to Oshkosh, as he was involved with that organization since its founding in 1953.” 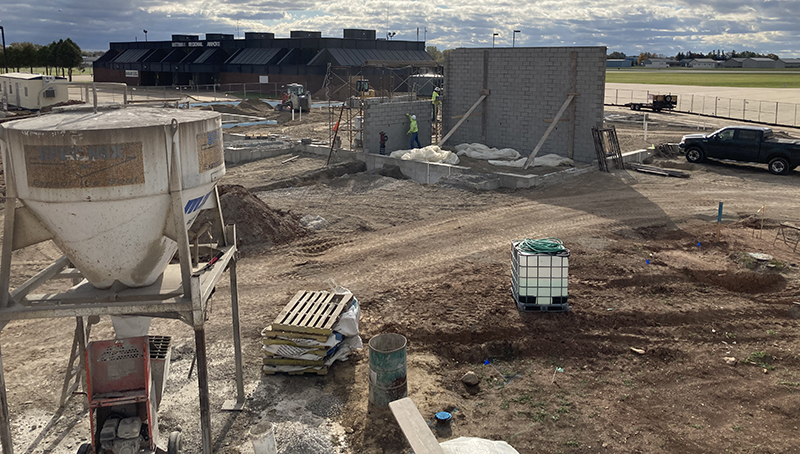 At various times, Wittman Regional was served by different commercial carriers, including Wisconsin Central, Air Wisconsin, American Central, United Express, Skyway, and Great Lakes Airlines. Since airline service ended in 2003, it has been primarily a General Aviation (GA) facility, and today, it is home to 174 based aircraft, multiple corporate flight departments, and over a dozen aeronautical businesses that service a wide variety of GA uses. “The Airport has long been a training ground for the next generation of pilots,” adds Schell. “And to this day, we have a very strong flight training presence, not only with Fox Valley Technical College’s flight training program, but also with two private flight schools – Aviation Services and Discover Flight.”

Since 1970, the Airport has also hosted EAA’s annual AirVenture event, perhaps the world’s biggest and best-known celebration of aviation, when every year, enthusiasts from over 90 countries bring over 10,000 aircraft, including warbirds, vintage planes, homebuilts, seaplanes, aerobatic aircraft, and ultralights to Wittman Regional, making it, for one week each summer, the busiest airport in the world. In fact, in 2019, attendance at the AirVenture event surpassed 642,000 aviators, and their friends and families, creating an economic impact of $170 million for the five counties in the Oshkosh region. “This year, due to the COVID pandemic, the 2020 version of the event was cancelled,” Schell laments. “But both the Airport and EAA are undertaking a number of improvements to prepare for the return of AirVenture in 2021.”

Some of those improvements are within the scope of the Airport’s forthcoming, new Master Plan, last updated in 2004, and which Schell reports is about 75 percent complete. Several of the key focus areas for redevelopment are the terminal area, the east side, general aviation hangar area, and plans for a new configuration of the Airport’s taxiway and runway system. “We currently maintain a waiting list of approximately 35 people for hangars,” he says. “So, we’re in the process of evaluating our hangar needs. We’ve also got a number of aging facilities that need to be addressed, long-term, in order to chart the path forward for the next 20 years. The goal, this year, is to start design on a new hangar development, in order to request funds for actual construction, next year.”

Currently, Wittman Regional has four runways, which is unique for a general aviation airport its size “Runway 18/36 is our primary runway; it’s over 8,000 feet in length,” Schell notes. “Runway 9/27 is our secondary runway at 6,179 feet. Runway 5/23 and Runway 13/31 form an X right in the middle of our airfield and are very much under consideration on what the long-term approach is going to be on those two runways. The FAA and the State Bureau of Aeronautics are not funding any rehab on those runways, right now. We’re trying to make the case to keep a third runway, and that’s looking that it would be Runway 5/23 that could be federally-eligible for funding. But it’s definitely a bit of a challenge in this day and age. So, we’re looking at a number of different options. Ultimately, we’re looking at an option that would, at minimum, take us from four runways, down to three, long-term.”

A current development at Wittman Regional is a $9.5 million project to reconstruct Taxiway Alpha, a concrete taxiway, built in 1967, and at the end of its useful life. The project is rebuilding 8,000 linear feet of concrete and widening the taxiway to 60 feet through the addition of paved shoulders, in order to accommodate its secondary use as a parallel runway during AirVenture. Taxiway edge lighting is being upgraded to LED, and the drainage of two aging culverts that carry a stream underneath the taxiway will be improved. The reconstruction began in March of this year and is expected to be complete by November.

Another major project, currently underway at the Airport is the construction of a new General Aviation (GA) terminal facility. Currently, there are two interconnected terminal buildings on the property. One, built in 1958, is the airport’s original terminal, which has been serving as the GA terminal for several years. The other, built in 1971, served as the commercial service airline terminal until the early 2000’s. “But since the end of commercial service in 2003, it’s mainly gone unused,” Schell explains. “Between the two buildings, there’s about 40,000 square feet of floorspace, which is just too large and too costly to maintain for the current and future needs of the Airport.”

“We are currently constructing a 12,500-sq.-ft., brand new, GA terminal that will provide the modern aerial gateway to Oshkosh,” Schell continues. “It’s scheduled for completion in June 2021. It will provide space for our FBO, Basler Flight Service, airport administration and operations offices, a car rental operation, and also a meeting room and event space. This project is a $5.5 million, multi-phase project that includes demolition of the existing terminal buildings, while opening up the adjacent land for future aeronautical development. That area is primarily slated for new, larger corporate hangar development, transient hangar development, and it will also leverage a big asset, which is our commercial service apron, that would be directly to the south, to build the new hangar facilities upon.”

Another ongoing initiative is the continuing development of the 80-acre, Oshkosh Aviation Business Park on the southeast end of the Airport. “Up until this year, it was not physically connected to the airfield, but now, all the infrastructure is in place to serve the Park, which includes a heavy-duty concrete access road, and all utilities, including water, sewer, and electrical service. Airfield access is now directly provided through a taxiway connector, which joins the Business Park to Taxiway Alpha on the airfield. So, we have a number of prime, shovel-ready sites for aeronautical businesses to create their home in Oshkosh. It would be perfect for aircraft manufacturing, MRO facilities, and a variety of other aeronautical businesses. Our goal is to diversify our regional economy by creating additional aerospace sector jobs and leveraging our strong infrastructure here at Wittman to continue to expand the economic impact that we have for the region, which is currently $210.7 million per year.”

Schell adds that the Airport is actively marketing the Oshkosh Aviation Business Park and looking to secure an anchor tenant. “It’s actually a joint venture with the City of Oshkosh,” he says. “Out of the 80 acres, the Airport owns 50 and the city owns 30. We’ve got an economic development corporation here in Oshkosh – the Greater Oshkosh EDC – that’s a partner in the marketing, promotion, and development of the Park. They’re the economic development arm of the city. So, it’s a joint effort, with the Airport taking the lead.”

Because the Airport has great infrastructure – two main runways and the taxiway system that connects them to different areas on the field – there had been a push years ago to return Wittman Regional to commercial service. But Schell doesn’t see that happening. “In this day and age, and with the growth that we’ve seen to the north at the Appleton Airport, and the level of service that they have, plus the airport down in Milwaukee (General Mitchell International Airport), there’s really not a whole lot of opportunity for Wittman, or Oshkosh as a community, to solicit air service. It’s about a 25-minute drive to Appleton, and you can be on any major airline – American, Delta, or United.” 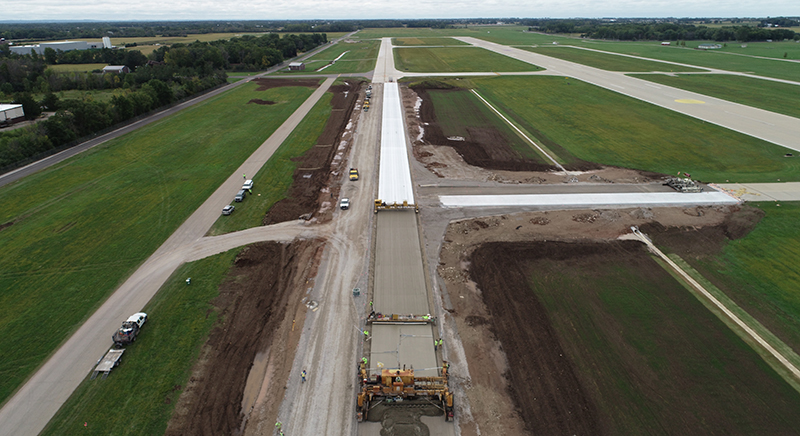 Going forward, Schell says the focus is on expanding upon and capitalizing on what our core strengths are. “Our mission is to be the premier general aviation airport in Wisconsin, facilitating a wide variety of uses and contributing to the economic growth of the region. We’re looking forward to the opening of our new general aviation terminal in 2021, and the return, of the EAA AirVenture event. We’re also going to be hosting, for the first time in our history, the NIFA (National Intercollegiate Flying Association) SAFECON (Safety through Education, Excellence through Competition) event, which was originally scheduled for 2020, but due to the pandemic, had to be rescheduled. We’re also looking forward to finishing our Master Plan update, the construction of new hangars, and pursuing developments in our Aviation Business Park and other available Airport properties.”

“Our vision is to be the vibrant gateway to Oshkosh, building upon our legacy as a center of aeronautical innovation, and to be a year-round destination for the modern aviator. With the ongoing and future capital investments, charting our path forward, we are moving the needle toward achieving that vision and strengthening our position for all those who call Oshkosh home.”

WHERE: In Winnebago County, Wisconsin, near Oshkosh