Coeur d’Alene has also been called Lake City, and when you look at a map of northern Idaho, you can certainly understand why. Situated on the shores of Lake Coeur d’Alene, the city is surrounded by beautiful scenery, hiking trails, and pristine waters. It is a short drive to National Parks, ski resorts, camping, and cabins. In fact, this is a vacation paradise. The Coeur d’Alene Airport, also known as Pappy Boyington Field, located near this paradise makes it even more accessible.

Coeur d’Alene Airport is a county-owned, public-use airport, located in Kootenai County, Idaho – nine miles northwest of the central business district of Coeur d’Alene and surrounded by the city of Hayden on three sides. “In a way, I suppose we compete with Spokane International Airport,” says Steven Kjergaard, Airport Director for Coeur d’Alene Airport, “because it is a great airport with the ability to accommodate most aircraft built today. But in reality, since we are not a commercial airport, the market is quite different and we cater to the small general aviation fleet and the corporate aircraft as well as the Forest Service tanker aircraft. 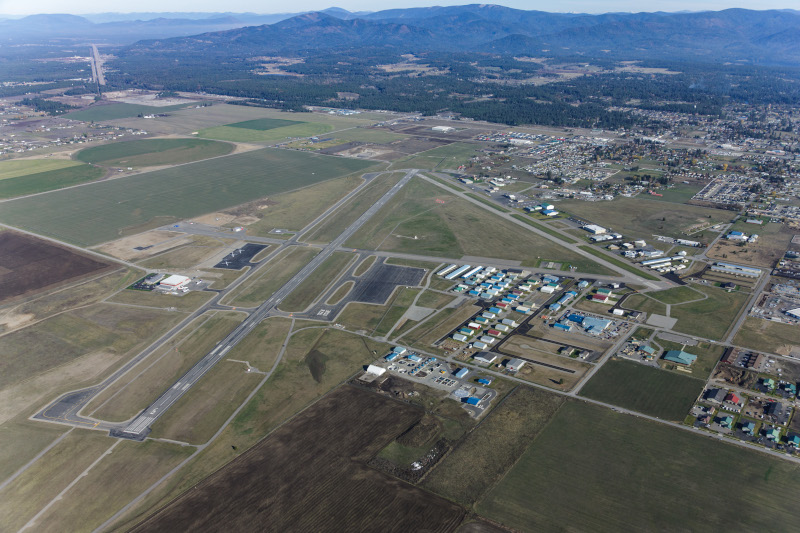 A little history – Coeur d’Alene Airport began as a fighter and light bomber training base for the Army Air Corps back in 1942. It was only the second Delta configuration air base ever built – an interesting design where the runways create a triangle, thus centralizing the facility. Although the Airport still maintains a similar configuration, it has grown and changed continually over the years to become a large and busy general aviation airport. Today, Coeur d’Alene is home to 225 aircraft and has a waiting list for hangars. Owned by Kootenai County and staffed by ten employees, the airport had over 85,000 operations last year.

“There is no cargo traffic or commercial aviation,” says Kjergaard, “but we see a lot of corporate traffic. We have around ten jets based on the field and most of them are Citations and Lear jets. We have multiple large hangars on the field to accommodate most corporate aircraft. Currently, we average about 15 or 20 percent of our total traffic as business jet traffic. The County owns one T-hangar facility, but our waiting list averages four plus years and we would love to expand the capacity and build another T-Hangar complex, but the cost to build is prohibitive. We also have ground leases for private storage hangars.”

In addition, there are two non-aeronautical businesses on the field. One is a composite parts manufacturer and another is a facility that makes surge protectors. The Airport is beginning the process of developing additional property that is not tied to the aeronautical sector. It is also working with the city to develop an 80-acre business park in the area, while actively pursuing new businesses.

Coeur d’Alene Airport recently finished a Master Plan update in which a number of necessary and desired improvements were highlighted. It begins with a need to decouple the runway ends of 24 and 20 that are in the old Delta design configuration. The FAA has determined they are no longer safe, so over the next two years they will be looking at decoupling them and shortening Runway 20 to meet standards. They will be leaving the primary Runway 6/24 – 7,400 feet in length – long enough to accommodate any large aircraft arriving or departing. 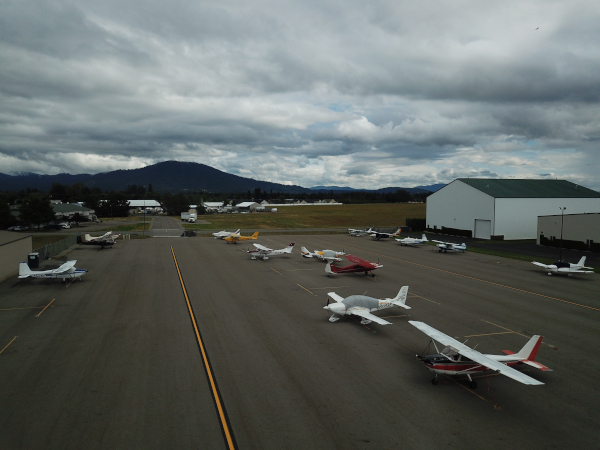 “On the far horizon, we would like to continue to develop our aviation businesses on the field,” says Kjergaard. “Our new Fixed Base Operator is also looking at doing an interior shop and another hangar in the future. We are also possibly looking at commercial service. At a minimum, we would want to do a point-to-point destination – or at least explore the possibility. We do have significant space for hangar and business development. The airport has a little over 200 acres that we could easily access. That being said, we are tight on a couple of spaces, so we are looking at purchasing an additional 160 acres in the next five years. The airport itself is approximately 1,200 acres at present. Beyond that, all of our future runway extensions, to extend out to 8,600 feet, can be done on land we already own. We also own the land necessary for all the runway protection zones, as well, so it allows us to expand out to that as soon as we have the demand.”

The Airport does receive funding from the County, and that varies between $300,000 and $500,000 a year, all from property tax revenue. “Our total budget is running between a million and 1.3 million,” Kjergaard explains, “and self-sufficiency is always on the wish list. I imagine it is for every airport. We are slowly getting there. We have corrected some of our leasing issues and we have entered into a new lease agreement with a FBO on the field. The biggest thing I would want people to understand is that the Airport is able to accommodate any aircraft in and out of the continental U.S. and we are in close proximity to 13 lakes and rivers, ski mountains, an amusement park and, if you are a golfer, Coeur d’Alene is the home of the famous ‘floating green.’ We are in close proximity to Kootenai County, the Quarterlane Lake, and anything in northern Idaho. We are surrounded by the beauty of nature; you should come to check us out.”

Tribute To A Hometown Hero

Born in Coeur d’Alene in 1912, Pappy Boyington led the famed Black Sheep Squadron in World War; downing 26 enemy planes before he was captured by the Japanese. He spent 20 months in a prisoner-of-war camp, and later received the Medal of Honor and the Navy Cross. Boyington died in 1988 leaving behind a legacy of unrivalled achievements in combat and aviation.

The Cavern City Air Terminal – We welcome everyone