Dothan Regional Airport is a public airport in Dale County, Alabama, located seven miles northwest of the City of Dothan, in Houston County, and owned by the Dothan-Houston County Airport Authority. “The airfield we operate from today, was originally constructed by the Army Corps of Engineers in 1941, and opened as Napier Army Airfield,” recounts Airport Director, Art Morris III. “It was named for a former flight surgeon, Major Edward L. Napier of Union Springs, Alabama, who died in an airplane crash in 1923. It was part of President Roosevelt’s program to try to build airfields and increase the size of the Army Air Corps, knowing that we would eventually wind up in the conflict. It opened prior to Pearl Harbor, but really cranked up afterwards.” In addition to training U.S. pilots, during the war, pilots from Great Britain’s Royal Air Force, as well as officers from the Mexican Army, were trained in AT-6 Texans and P-40s.

“After World War II, the airfield was given back to the City of Dothan and Houston County,” Morris continues. “It sat here for awhile, because the City of Dothan had its own municipal airport that had opened in 1940. It was served, initially, by Eastern Airlines, and then by Southern Airways, but it had very short runways. In the early 1960s, Southern told the City that is was going to be acquiring jets and was going to need longer runways. So, the Airport moved out to what was Napier Field. They got various bond issues and borrowed money and built the terminal building and the FBO. There was already some infrastructure on the Airport left over from WWII, which a company called Hayes International, an MRO operation, was using – they were doing work on military aircraft at the time for Army, Navy, and Air Force. Runways were lengthened, infrastructure was improved, and the Airport opened for business as a commercial service airport on Feb. 14, 1965. At that time, the old airport in Dothan was closed.” 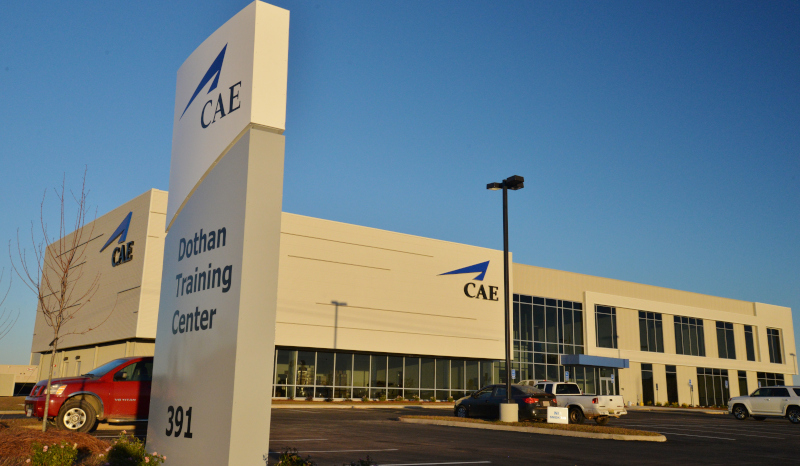 The Dothan Regional Airport has grown steadily since then, Morris reports. “On occasion, we’ve had two fixed-base operators here; one of them, Aero-One Aviation, bought out the other one. The MRO operation has changed hands several times. Currently, we have a company called Commercial Jet Services that occupies that space, which has expanded over the years, as well. Flight Safety International came to the Airport in 1986, with a contract to train Army fixed-wing aviators. They operated here until two years ago. CAE bid on the Army’s contract and took it over and also built some additional facilities at the Airport, including a state-of-the-art training center with full-motion simulators and state-of-the-art classrooms. We’ve got some general aviation maintenance operations on the Airport in addition to the MRO and a few private hangars. All of the T-hangars and GA aircraft storage is leased to our FBO and they turn around and sublet to individual tenants.”

Dothan Regional Airport is completely self-sustaining. “We don’t use any local tax dollars for operations,” says Morris. “Our money makers on the Airport are general aviation, industrial activities, and military training, so that’s what pays the bills. We’re able to generate enough revenue to pay all of our own expenses and then have some left over that is put in capital development funds for reinvestment into infrastructure. We have about 30 Airport Authority employees, and there are probably about five or six hundred employees at the Airport who work for individual tenants. We’ve got TSA here; there’s a restaurant inside the Airport; I’ve got three car rental agencies and a gift shop. The FBO has a terminal and we’ve got about 90 based GA aircraft. We’re currently served by Delta Airlines through Skywest. Total operations a year vary between 80 and 90 thousand.”

Morris adds that there is currently a waiting list for hangars and that GA tenants work directly with the FBO, which leases property from the Airport. “There are exceptions to that, though,” he explains. “We do have some corporate hangars that we lease directly to corporate tenants. If someone says, ‘I want to base a Citation or a Hawker jet or a Gulfstream, and I need a larger hangar and I’d like to lease directly from you,’ we would entertain the idea of allowing them to do that and then giving them a long-term lease. At the end of the lease, the hangar is going to belong to the Airport, again, but during the term of the lease, it would just be a land lease to the company. So, we do that, but that is the minority of my hangar business. The majority is leased directly to the FBO or some sort of maintenance or large aircraft operation – we lease about 400,000 square feet of hangar space to Commercial Jet. I’ve got some additional hangars we’re in negotiation with, right now. I’ve got two smaller hangars – one’s about 13,000 square feet and one is around 16,500 square feet. I’ve got another one that’s around 36,000 square feet that we’re talking to another company about that would be involved in some larger aircraft maintenance. So, hopefully, we’ll get those leased in this fiscal year.”

When asked if Dothan Regional Airport is in competition with any nearby facilities, Morris explains thusly: “All airports have some things in common, particularly if you’re talking about Part 139 airports. We all have the same FAA regulations to comply with; certain standards we have to adhere to; we have runways; we have taxiways; we have ramp areas. So, in that sense, we’re similar. However, our configurations, our actual infrastructures are different, and our markets are different.

“We are 90 miles from Panama City, Florida. The Airport Director there is a friend of mine and we get along great. Are we in competition with one another? Yes and no. His market is different. Most of my market is business-related; most of his market is leisure-related. He’s got a beach, I don’t. If you’re looking at families that are looking for the cheapest fares, they’re always going to buy the cheapest fare even if they have to drive a hundred miles to get to it; if you’re talking about the average business person where time is critical, they’re not always after the cheapest fare, they’re after convenience. He has really good fares in and out of his airport and he has more air service than we have. But, it’s a resort destination – Dothan is not. So, it’s comparing an apple to an orange.

“So, we do kind of compete, but it’s not really direct competition and there are differences in the markets. So, if you tell me you’re flying from Chicago and you want to go to the beach, it doesn’t make any sense for you to fly into Dothan – you need to fly to Panama City. If you tell me that you want to come into southeast Alabama or northwest Florida and you’re scouting for a site to build a plant, maybe Dothan would be a more convenient location for you because now you’ve got better access to both states.

“Tallahassee is a hundred miles from us; Montgomery is a hundred miles from us. Those are fairly comparable airports, they’re larger than we are, and they’re also both capital cities. So, again, while there are a lot of similarities, and we do compete for a certain segment of our commercial passengers, it’s different because they’re capital cities. Those airports are focused mostly on passengers and not necessarily, industry. When we look at industrial development, we have passenger service here that’s very important to the economic development of my community and we do everything we can to try and promote and encourage that.”

In fact, promoting business is definitely high on Dothan Regional Airport’s agenda, and the Airport does have land available in an industrial park just outside its perimeter. Morris says that the City of Dothan and the Airport Authority work closely with the local Chamber of Commerce to do the industrial marketing for the area. “They, in turn, work with the Economic Development Agency in Dale County, where the Airport is physically located,” he explains. “We’re inside the city limits of Dothan, which is the county seat for Houston County, but the actual property is located in adjacent Dale County. Both counties, and the City of Dothan, work together on industrial development and marketing the Airport. It’s a really beneficial relationship. They also provide some funding for us – not at my request, but at their suggestion. They usually come to us and say, ‘We’d like to partner with you and market this particular venue in this particular medium; this is what we’d like to do and we’ll put up 90 percent of the money and you put up ten percent.’ If it sounds like a good idea to me, we’ll go ahead and do it.”

Regarding the Dothan Regional Airport’s infrastructure, Morris says that one current project is replacing the general aviation ramp. “We’ve probably already done about 16 or 17 acres of it; I’ve got about another 15 acres to go to replace concrete on that ramp. Most of the concrete that we’ve got dates to 1941; it was really well-built then. We’ve done steady maintenance on it, so it’s not a hazard or a danger, it’s just getting to the point where I really need to remove slabs and replace some. And the only way to do that properly is complete replacement, not spot repairs, anymore. So, we’re in the process of phasing that in and, normally, every ten years or so, we start paving certain taxiways and start moving around the airfield, repaving surfaces and constantly updating them. I’ve got three available hangars that we’re in negotiation with, right now. If these deals go through, we’ll be at 100 percent capacity at that point, and then, we’re looking at Greenfield type development.”

“We always encourage growth and development, and CAE would like to grow its training beyond just the existing Army and Air Force contracts they have, and, perhaps, expand and do some other types of aeronautical training here,” Morris adds. “There is some infrastructure I’d like to build to assist CAE with some of its future plans – expanding their ramp and making it larger for them to make it easier for them to market. However, I don’t have a funding source for them yet; that’s not an FAA-eligible item, so we’re looking at alternative ways to try to get that funded.”

Morris believes that aeronautical-related businesses wishing to develop or expand their operations at Dothan Regional Airport benefit from its Alabama location. “Our governor, our state legislature, our economic developers are very aviation-centric,” he avers. “We also have an industrial development training program in the State of Alabama for any potential tenants that wish to locate here and need help in training or developing their workforces. They will come in and set up an industrial training program for your employees for free. Your only obligation is that when they complete the program, you hire the people that qualify to work for you. It’s a pretty good deal and the State of Alabama has been pretty successful with automotive and aerospace industries with those types of programs. And we’re well-situated. If your market needs to touch Georgia or Florida, we’re right here in the corner, so you have access to all three states.”

“The other thing is, we are an Airport Authority and not a city, so we operate like a business,” Morris adds, in conclusion. “It’s a lot easier to get through the zoning and permitting process with us than with a city or a municipally-owned airport. We’ve got good infrastructure here: an 8,500-foot and 5,000-foot runway, good instrument approaches; we’ve got 24-hour ARFF (Aircraft Rescue and Firefighting) protection; a control tower; police protection on the airfield; it’s a good, business-friendly environment at the Airport.”

Check out this handpicked feature on The McAllen International Airport – A unique regional airport.