Ely Airport has been used for a wide variety of purposes over the last century. It was a pilot training facility during World War II. It was a stop on a United Airlines route for decades. It has even been a destination for glider pilots. But the most important function it serves today revolves around medical services.

“We have one FBO (fixed-base operator), Ely Jet Center, which is owned by Guardian Flight, one of the two air ambulance companies on the field,” explains Tim Parish, Interim Airport Manager and Ely Jet Center Manager. “The other is MedX AirOne. We also have a number of doctors who fly their own planes in to work at the clinic or hospital. This airport is vital to the medical needs of the area.” 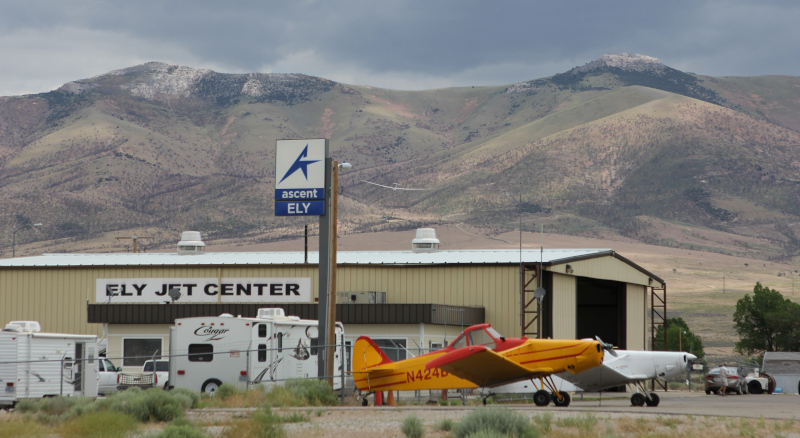 Ely Airport, also known as Yelland Field, is a general aviation airport located three miles northeast of the City of Ely in White Pines County, Nevada. The county owns the airport that covers nearly 5,000 acres in eastern Nevada, just less than a two-hour drive from the Utah state line. A number of peaks surround the airport land, including Cave Mountain to the southeast and Huesser Mountain to the northwest. And Great Basin National Park is just over an hour’s drive to the southeast. Ely Airport itself sits at an elevation of 6,259 feet. This elevation and general location create the conditions for ideal thermal currents that attract glider pilots from around the world during the summer months. Hot air ballooning and Ely Air Races have also taken place there.

Aviation dates back to the early 1910s in Ely, Nevada. There was debate about whether pilot Frank H. Burnside would be able to take off because of the high elevation, according to the July 6, 1913 edition of the White Pines News. Burnside was not only able to take off, but he also landed on 11th Street and D Avenue in the town of Ely. Records of the airport’s early history in the 1920s and 30s is spotty, at best. However, it appears a man named Carl Ooley piloted several flights in 1926. He faced the simplest of regulations, such as “never leave the ground with a motor leaking,” and “pilots will not wear spurs when flying.”

Seagull Lines started operating an air charter service out of Ely Airport in the mid-1930s. The formal dedication of the airport is reported to have taken place in 1938. In June of that same year, President Franklin D. Roosevelt signed the Civil Aeronautics Act creating the Civil Aeronautics Authority, which oversaw an experimental program to train civilian pilots through educational institutions. The Civilian Pilot Training Act of 1939 expanded the training program.

U.S. leaders had been aware of similar civilian-pilot training programs in Europe, particularly in Germany and Italy, in the period preceding World War II. They decided the U.S. needed to expand its training program quickly to keep up, and Ely Airport became a training facility for this program in 1940. Students at White Pine High School and anyone younger than 28 was eligible to apply. Eight students passed, two of which were women. In 1940, a total 9,885 pilots from across the U.S. graduated from the civilian-pilot training program, according to the Federal Aviation Administration.

U.S. Sen. Patrick McCarran from Reno, a proponent of the aviation industry and a sponsor of the Civil Aeronautics Act of 1938, helped secure $350,000 for runway improvement and lights at Ely Airport in 1941. The airport has the distinction of being the smallest destination to be served year round by United Airlines jets. The first commercial flights at the Airport came via United Airlines’ Convair 340s in 1955. The airport was also part of United’s last piston flights, the Douglas DC-6s, in 1970. United then used Convair 580s, flown by Frontier Airlines from 1950 to 1986, via a subcontract arrangement. United Boeing 737-200s took over from 1977 to 1982, flying San Francisco to Reno to Elko (Nevada) to Ely to Salt Lake City and back. On November 12, 2006, Air Midwest Beechcraft 1900Ds began flights to McCarran International Airport in Las Vegas via Cedar City Regional Airport in Utah. The stop in Cedar City was due to the fact that McCarran Airport requires Transportation Security Administration screening, and that was not available at Ely Airport at that time.

Among those improvements were a complete reconstruction of Runway 18-36 and Taxiway A. Included in the project were new lights for Runway 18-36 and a new emergency generator for airfield lighting. This project was completed in the spring of 2019. Timely completion of the project earned Ely Airport the Federal Aviation Administration’s Outstanding Airport Award for that year.

There are currently 10 private planes stored at the airport. MedX AirOne built a new hangar earlier this year and there is plenty of space for additional hangars to be built on the airport’s 4,999 acres. Ameriflight runs daily flights to Ely Airport for UPS package delivery and corporate representatives from Love’s Travel Stop fly in on a regular basis to check on a nearby location. There is also some flight activity related to large ranches in the area. “Out here in Nevada, around 1948, they had what they call the haylift,” recalls Travis Godon, White Pines County Commission Vice Chairman and Airport Liaison. “They got so much snow in winter they had to feed all the cattle by dropping hay out of the airplanes. The airport was used quite a bit for that.”

The United States Department of the Interior Bureau of Land Management has a district office in Ely, and the Ely Airport is used heavily by them during fire season. The Ely District itself encompasses 12 million acres in eastern Nevada. That includes White Pine County, Lincoln County and a small portion of Nye County. One benefit of Ely’s remote location and current lack of passenger service is that COVID-19 has had little effect on the airport. There was never a closure. Freight and medical flights carried on, largely uninterrupted.

Medical flights continue to account for the bulk of Ely Airport’s traffic. William Bee Ririe Critical Access Hospital and the William Bee Ririe Rural Health Clinic serve an area of nearly 9,000 square miles. They offer some services but cannot do everything larger facilities in Salt Lake City or Las Vegas can. And both of those cities are nearly four hours away by car. “Having the Medflight capacity definitely helps with folks relocating to small town America,” says Godon. “They have that security that if something does happen, then they can be to a large, capable hospital fairly quickly, so that gives the residents in Ely and the surrounding area great peace of mind.”

Regional airports are well regarded as an extension of their local communities, and the important role they play in economic development and tourism cannot be understated. That holds especially true for Ely Airport. The nearby City of Ely is a four-season mountain town with a rich history, an appreciation for art and culture, and the best outdoor recreation in the state. As Kyle Horvath, Director of Tourism & Recreation for White Pine County, attests, “Tourism and economic development are the same thing in my eyes. You develop a quality of life in a place that is great to visit and eventually people will start to consider it a viable place to live. For me, an airport has less to do with flying in visitors for the weekend and more to do with creating the opportunity for streamlining supply chain and distribution, improving medical services, and creating recreational opportunities that will draw people and industry to the area for the long term. White Pine County has room to grow and having such an important piece of infrastructure as Ely Airport already in place puts us at an advantage over other developing rural communities.”

From inception, MedX AirOne made a decision to operate differently than other air medical companies with the notion that air and ground critical care services could be provided to rural areas of Northern Nevada without the fear of “Surprise Billing” and not placing patients and families in distress over high bills after they are transported. MedX AirOne is Nevada’s preferred in-network provider for commercial insurance and large corporate partners in Northern Nevada.

The MedX AirOne Team believes it is important to utilize top notch technology allowing rural Nevada to request air medical assistance via a one touch app on a cell phone and “easy buttons” specifically programed for each location. With a press of a button, air medical activation is summoned to a specific location such as a hospital, ranch location, mine site, or other specific rural locations with no phone call required.

MedX AirOne strongly believes if we provide the highest quality service, place the patient and communities in the center of all we do, our model will be successful and rural communities will have the access to healthcare so desperately needed and much deserved. There is no paperwork to sign up and no fine print. All residents in rural Nevada need to do is ask for MedX AirOne, it’s that simple.