The Grand Junction Regional Airport is a commercial and general aviation facility located three miles northeast of Grand Junction, in Mesa County, Colorado. Today, the Airport, which originally opened in 1930, encompasses 2,300 acres, making it the largest airport in the western part of the state. It supports over 700 employees, and serves over 452,000 passengers and 4.5 million pounds of cargo, annually.

As the Airport’s business has grown to include a diverse portfolio of tenants, its infrastructure needs have, likewise, evolved. “Our primary runway is 10,000 feet long and 150 feet wide and can land just about everything,” says Executive Director, Angela Padalecki. “But it was built in 1952, and is approaching the end of its useful life. So, we’re replacing it and building a new one. We broke ground in August 2018. That project remains on schedule and we expect it to take up to ten years.”

Padalecki reports that an initial grant of $4.9 million from the FAA’s Airport Improvement Program is paving the way for this major reconstruction project. “Last year, we relocated the remote transmitter receiver, or RTR – that’s the ground/air radio,” she explains. “The former one was in the way where the new runway goes. We also relocated a city road, nearby, that needed to be moved in order to enable the buildout of the runway. This year, we’ll be building out our fence line for our new perimeter. We received a land patent for the transfer of land from the Bureau of Land Management (BLS) to the Airport of about 188 acres. Our Airport perimeter line is now officially established, so we’ll be fencing that in. Most of these projects, I would classify as enabling projects to really enable the buildout of that new runway; that’s what the $4.9 million grant will be used for, primarily, as well as some retaining ponds and some other work.”

“We’re estimating that the total cost will be about $150 million,” Padalecki adds. “We anticipate this project will be funded 90 percent by the FAA; we provided a ten percent match, so we are completing construction as quickly as we receive grant money. We do have a long-term plan, right now; we think it will take about eight years to complete the runway, but we will move as quickly as they give us funding, and we have our match ready.”

Another recent project at the Airport was the renovation of its passenger terminal. “We’ve spent about $5.5 million upgrading the mechanical systems, HVAC, replacing the roof – those types of deferred maintenance items,” Padalecki says. “We also spent some money on code compliance to improve the safety elements in the terminal, and on customer experience upgrades, including paint, refinishing stair rails, installing some new art, installing new light fixtures, etc. That work is wrapping up. We anticipate replacing the flooring in the terminal later this year, and also making some improvements to our TSA security checkpoint and our baggage handling system in the next 18 months or so.”

“The theme for the Airport, right now, is growth,” Padalecki declares. “We have double-digit growth year over year, and we expect even stronger double-digit growth, this year. Our passenger traffic is up, and looking into 2020 and beyond, we expect that trend will continue. That growth is fueled by a few things: we’re seeing strong economic growth in this region, which includes population growth. We’re seeing a shortage in the housing sector; this most recent quarter, they estimate that home values were up 11 percent versus Q2 in 2018. That is driven by a few things: one of them is just organic economic growth across all of our industries here – the healthcare sector, the transportation and technology sectors, and manufacturing. Much of that technology and manufacturing is centered around outdoor recreation, so you’re seeing this become more of an outdoor recreation hub with tourism growing. So, we’re seeing all of that. And the Department of Interior just announced that the Bureau of Land Management’s headquarters will relocate from Washington, DC to Grand Junction. So, that will also bring additional people and additional attention to this region. We think that is going to continue to add momentum to the trends we currently see.” 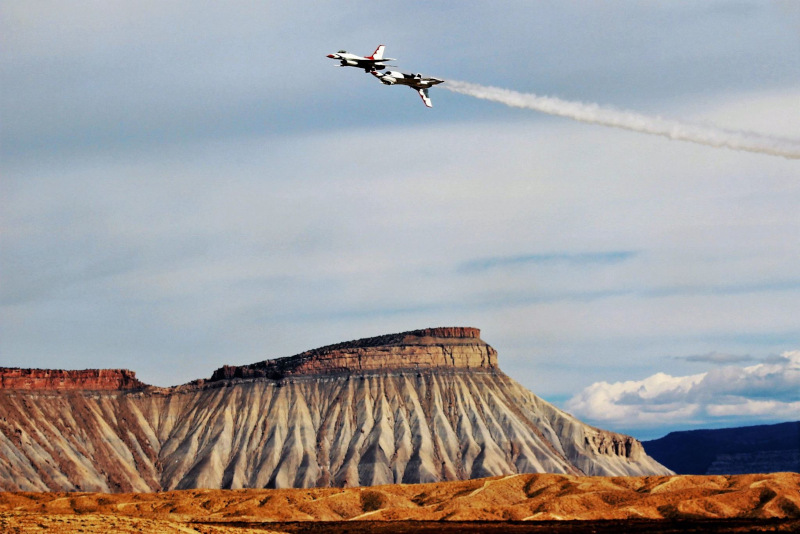 “As it applies to the Airport, there are a couple of things that are separate but related that are contributing to an acceleration of that growth,” Padalecki continues. “One is the City of Grand Junction approved a lodging tax increase in November of 2018 to fund air service development incentives. That will provide an ongoing stream of funds from the community to share in the risk of adding new and expanded service from the Airport with the airlines. So far, we have not used that funding; all the growth we’re seeing has been driven by the local economy and by some air service development work that the Airport’s completed. But we feel confident those trends will continue, in part, because we have a really valuable tool, now, to expand air service. So, we’re working closely with the airlines on that.

“The second thing is we are home to Western Aviation, who won, for the sixth consecutive year, MRO of the Year designation. They continue to grow and expand and this year, they’re continuing to see strong growth. So, we’re really seeing growth on all fronts – our passenger traffic numbers, the number of landing operations, the number of diverted flights that come here because we’ve established ourselves as a really reliable airport.”

Regarding reliability, Padalecki reports that Grand Junction Regional recently was awarded, for the second consecutive year, a five-star, on-time performance rating from LAG, an industry trade group. “That designation means that we finish the year ending May 2019, in the top ten percent of airports in the world for on-time departures. We are one of three airports in North America to receive that designation. So, reliability is a theme, here, as well, and that’s really helping to foster and promote growth. We have the addition of two new non-stop routes: Allegiant Airlines started non-stop service to Mesa, Arizona in April, and United Airlines started non-stop service to Chicago in June.”

The Airport is not only reliable for its planned passengers, it’s becoming a top option for airlines forced to divert from their original Colorado destinations. “Some of our neighboring airports experience much more extreme weather conditions and there’s less collaboration between the airport and the airlines, so their on-time performance is much lower; it’s very common for flights to be cancelled going in and out of them and we just don’t have that here,” Padalecki notes.

Growth and reliability – the hallmarks of Grand Junction Regional Airport – do not go unnoticed by Director of Operations, Mark Papko, who concludes, “To see that growth, in addition to receiving over 370 diversions last year, and still taking home some of those awards, like the five-star performance rating, speaks volumes.”

WHAT: A commercial and general aviation facility