There at the beginning

Ithaca Tompkins Regional Airport (ITH) is a public-use airport in upstate New York that supports commercial and general aviation. Located just 10 minutes from Cornell University and downtown Ithaca, the Airport is close to many destinations in the Finger Lakes, a popular leisure and recreation area. In 2017, more than 200,000 passengers were served at Ithaca Tompkins, which generates over $30 million for the local economy and nearly $456,000 in sales tax revenue. 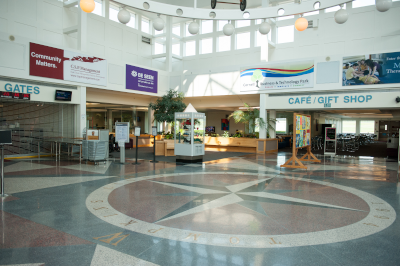 Ithaca can boast of playing a key role in the development of the nation’s aviation industry, starting in the early 1900s, when a group of Cornell students formed an aeronautical club. The club had 80 members by 1903, when the Wright Brothers made their historic, first sustained-power flight.

In 1914, the Ithaca Board of Trade invited aircraft designers, William T. and Oliver W. Thomas, to establish an aircraft manufacturing plant in the city. Formed near the conclusion of World War I, the Thomas-Morse Aircraft Corporation became best known for its Thomas-Morse Scout. One of their iconic, single-seat biplanes is being restored and will fly on September 29, and then be retired to the local history museum, says Ithaca Tompkins’ Airport Manager, Mike Hall. “It’s quite a remarkable old airplane,” he notes.

Hall says that a century ago, Ithaca was the world’s leading airplane producer, as well as a leading producer of motion pictures before Hollywood’s rise. But for both industries, changing times meant changing fortunes for Ithaca. As he explains it, just as with the movie business, Ithaca lost out to an entity that would also become known, worldwide.

“The Thomas-Morse Scout was owned by the United States government and when a second round of airplanes was ordered, we lost the bid here in Ithaca to a startup that had access to Sitka spruce, which is what most of the airplane was made out of,” he says. “That startup was the Boeing Airplane Company.”

The city’s first airfield, the Ithaca Municipal Airport, is believed to be only the second airfield in New York State. It was located near the inlet to Cayuga Lake. “You can imagine, if you’ve seen the Finger Lakes, the land is 1,000 feet above the lake, so it was down in a little trench and not ideally suited at all for growth,” recalls Hall. “But it served the community during the early years of aviation and that included when (aviation pioneer) Glenn Curtiss was flying just down the road.”

In the years following World War II, Ithaca Tompkins Regional Airport moved to its current, hilltop location, which was an airfield that Cornell, with its Cornell Aeronautical Laboratory, constructed during the conflict. “Cornell granted the Airport to the county in the ‘50s, and, gradually, flight activity moved from the old airport down on the lake to the new airport up on the hill,” explains Hall.

During those early days, the airfield was home to Robinson Aviation, which later became Mohawk Airlines, the precursor of American Airlines, Allegheny Airlines, and US Airways, says Hall. “Mohawk Airlines was really founded here in Ithaca to serve the interests of Cornell University,” he says. “They had DC-3s flying around upstate New York, much as American had a decade earlier, and then Convairs and what have you, up to the current jet service we have through our legacy carriers, United, American, and Delta.”

Ithaca Tompkins remained a small municipal airport, owned by Tompkins County, throughout the 1950s. But activity there picked up as the commercial airline industry began to flourish during the 1960s and today, there are about 100,000 enplanements, annually.

“So that’s where we are today; three legacy airlines here because of Cornell University and also Ithaca College,” says Hall. “The movies moved away, the aircraft industry moved away, Cornell moved away from the aeronautical lab, in part, because of the political changes that took place in the ‘50s and ‘60s, with a desire to distance itself from the defense industry, and we’re left with a very nice airfield with, I like to say, 7,000 feet of runway. It’s actually 6,996. Why they couldn’t have put four more feet on the end of it is beyond me. But that’s more than O’Hare (International Airport) and that’s more than John Wayne (Airport) in Southern California, so we’ve got an adequate runway.”

Hall says the Ithaca Tompkins Regional Airport is rather unique because of its “second-segment travel” that connects it to airports in Newark, Philadelphia, and Detroit. “As ‘O & D’ (Origin and Destination) destinations, those don’t really pan out,” he explains. “First of all, you can drive to Newark pretty much as fast as you can fly. Philly’s a little bit farther and Detroit is farther yet. The bottom line is that our travelers go from Detroit to Tokyo, Newark to Shanghai, and Philly to Seoul and Frankfurt. So it’s that second leg that makes this market appealing to airlines.”

Ithaca Tompkins Regional Airport is also unique in upstate New York because half the region’s commercial air traffic flies into the airport, adds Hall. “We have, needless to say, in upstate New York, a very large leisure market built around other cities, where people leave to go to escape six months of winter and when they’ve spent their money, they come back home,” he says. “But here, they come to invest in the community and the high tech industry that’s out by Cornell University.” 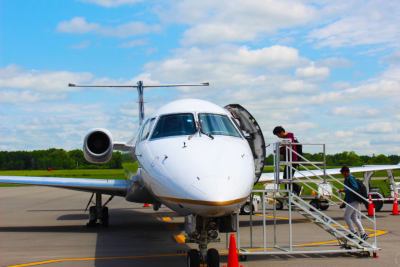 Hall adds that the Ithaca Tompkins Regional Airport is self-sustaining and that all businesses on its property are aviation-related. However, Ithaca Tompkins is surrounded by property still owned by Cornell, including the university’s Cornell Business and Technology Park. That facility abuts the Airport and it is home to a variety of high-tech businesses.

The Airport’s proximity to Cornell, a global brand, along with Ithaca College, help to make Ithaca Tompkins a key cog in upstate New York’s economy, Hall reports. “That’s the reason we’re growing by three percent a year and everybody else in upstate New York is shrinking by three percent a year,” he notes. “We have about 2,000 charter operations here during the course of the year. It’s even common to see a China-registered airplane. So, our plans include adding a customs facility so our guests to the community can fly here directly and not have to stop someplace to clear (customs) as they come in from their international origins.”

In fact, the future is already unfolding at Ithaca Tompkins Regional Airport, with the recent addition of new, modern seating in the 25-year-old terminal. Plans call for the terminal to be expanded by one third over the next year to accommodate burgeoning demand.

“We’re growing in double digits after a fairly significant collapse around the 2010 to 2012 time frame when we had the regional accident in Buffalo and all the rules kind of changed and you had a lot of mergers and acquisitions and bankruptcies and what have you,” says Hall. “So we’ve been seat limited – not for the entire decade, but two-thirds of the decade. But those seats are starting to come back with the larger gauge airplanes, and so we’re filling them with very robust load factors. And if they gave us 20 percent more seats, we’d fill them with the same load factor, and that’s going to happen.”

The airport’s 32 general aviation hangars are full, as are a couple of big hangars that are operated by the FBO. Hall says he’s taking a hard look at adding some outsized T-hangars that are upscale in terms of size and amenities.

“And certainly, we’re interested in attracting businesses to base here,” says Hall. “When we build that custom facility, I think that will help draw some of the corporations in this general area that have their own aircraft and can have an advantage by being based by a field with customs.”

Ithaca Tompkins Regional Airport is also home to an active flying club that flies 2,500-odd hours a year. Hall wants to see the flight academy business expand at the Airport in light of the national shortage of qualified pilots.

“We have support from State of New York, in the form of a grant to build an academy building to teach people who want to learn to fly,” Hall remarks. “So that’s a growth area that I think holds some great potential. Do people like to train in Phoenix? Yeah, they do and this is upstate New York, but in my case, I graduated from pilot training at Craig Air Force Base in Alabama where the weather was pretty crummy and I was a much better pilot as a result. We struggled sometimes to get people through training in 52 weeks because we’d be down for weather, but those of us who got out of there knew how to fly instruments while inside a cloud. So, I think that our situation here, year round, is more than adequate for a good flight training facility and that’s something we’re interested in doing because I think we can contribute to the national demand for pilots.”

WHAT: A public-use airport that supports commercial and general aviation