Logan-Cache Airport is a small, public-use, general aviation airport, three miles northwest of Logan City in Cache County, Utah. The airport was originally developed on farm land purchased by the joint partnership of Logan City and Cache County in the early 1940s, to establish a pilot training facility prior to World War II. “It started out with dirt runways,” says Airport Manager, Lee Ivie, “and eventually had three paved runways, with the typical runway configuration that the military used. At the present time, we have two active runways, as one runway was closed around 1980.” 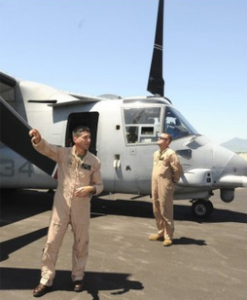 “In 2000, the main runway, 17/35, was extended; prior to that, it was a 5,000-foot runway, now it’s over 9,000 feet long,” Ivie continues. “In 2016, our cross wind runway, 10/28, was repaved. In 2005, we installed an ILS (Instrument Landing System) approach system at the north end of runway 17/35, to assist pilots with landing at the airport in adverse weather conditions.  In the winter time, we have a lot of fog and some of the corporate jets were not able to come into the airport without this ILS system.”

For many years, Logan-Cache had scheduled commercial service, but, today, it operates mainly as a general aviation facility. The airport has 176 based aircraft, and accommodates approximately 137,900 takeoffs and landings each year. “With the part 139 certificate that the airport operates under, we have the capability of providing scheduled, essential air service in and out of the valley,” Ivie explains. “Currently, the only scheduled airlines that operate out of the airport are charters for the Utah State University (USU) athletic program.”

Other operations at the airport include: the USU pilot training program for both fixed wing and roto-wing (helicopter) aircraft; the USU A&P (Airframe & Powerplant) training program; a Fixed Base Operator (FBO) that provides fuel sales, aircraft maintenance, a flight school called Leading Edge Aviation, and aircraft rentals; USU Research Laboratories that develops weather monitoring equipment; and over 80 hangars, serving the needs of several corporations and other general aviation operations in Cache Valley. The airport is also popular with glider pilots, who often fly long distances from thermal and ridge lift in the nearby mountains.

Ivie reports that, this past year, in an attempt to keep up with the demand for its general aviation customers, three new corporate hangars were constructed. “In 2015, we added a taxiway, which we thought was going to meet our needs for the next five years,” he opines. “We filled that area up within two years. We have more plans for developing taxi lanes to accommodate larger, corporate hangars. Some of these hangars will probably be affiliated with USU and their flight training program and their A&P training. That seems to be the thing that is in most demand, right now.” 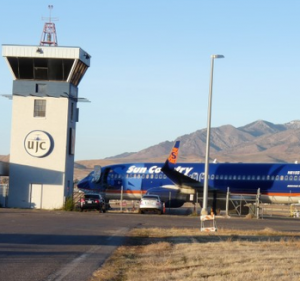 Logan-Cache is managed by a seven-member board made up of representatives of both Logan City and Cache County which, together, cover approximately 40 percent of the airport’s operational expenses; 60 percent of its revenues are derived from leases of land, buildings, fuel flow fees, and tie down fees. “Most of the technological advances that change the dynamics of the airport are primarily funded by the FAA through the National Plan of Integrated Airport Systems (NPIAS),” Ivie adds. “Over the years, Logan-Cache Airport has been the recipient of many grants for paving projects, lighting systems, the ILS system, fire- fighting and rescue vehicles, wildlife hazard management plans, airport master plans, navigational aid systems, etc. State grants from the Department of Transportation generally provide for the ongoing maintenance of the pavement projects.”

Going forward, Ivie says that because Logan-Cache is so close to the Salt Lake International Airport, there are no current efforts to establish scheduled commercial air service, but he does not rule out the possibility in the future. “That’s going to be determined by inquiries by the airlines themselves,” he avers. “In the meantime, we’re trying to fulfill the needs of the community here, while maintaining a pleasant and welcoming environment for all air travelers.”

Check out this handpicked feature on The Ohio State University Airport – Serving a dual role.

WHERE: Three miles northwest of Logan in Cache County, Utah

LE Aviation was founded in 2004 by Scott Weaver when he purchased the assets of an existing FBO at the Logan-Cache Airport in Logan, Utah. The company has grown steadily to become a thriving, community-focused enterprise by valuing safety and satisfaction of its customers.