We have the capability

The Lumberton Regional Airport is a general aviation, public-use airport located less than four miles west of the central business district of Lumberton, a city in Robeson County, North Carolina. The Airport covers an area of 485 acres and has two asphalt runways – 5,502 X 150 feet, and 5,003 X 75 feet. The original airport in Lumberton was set to be replaced in 1940 after the city passed a bond referendum for construction of a new facility but, “When the war broke out, the War Department leased out the land and finished building the airport,” recounts Airport Manager, Troy Gammon. “It’s a typical World War II airport. It had three runways; we still have two active runways, and the remnants of the third one built by the military.”

The Airport was turned back over to the City of Lumberton after the war. In 1952, the first FBO was built to service the commercial piston aircraft that flew between New York and Miami. “This is the halfway point between the two,” Gammon says,” and we actually had commercial service from ’52 to ’55. After that, the jet age came and they stopped coming here. It became a general aviation airport, which it is, still, today. In 1969, they built the new terminal building and this February, we tore it down to build our new one. Between then and now, we’ve had regular business aviation coming in and out and routine general aviation. The majority of our business is commuters going north and south on the east coast. We’re also home to 42 GA aircraft. Right now, we are at maximum capacity for hangar space. We’re looking at purchasing a private hangar that is adjacent to the Airport; buying that and adding to the Airport property.” 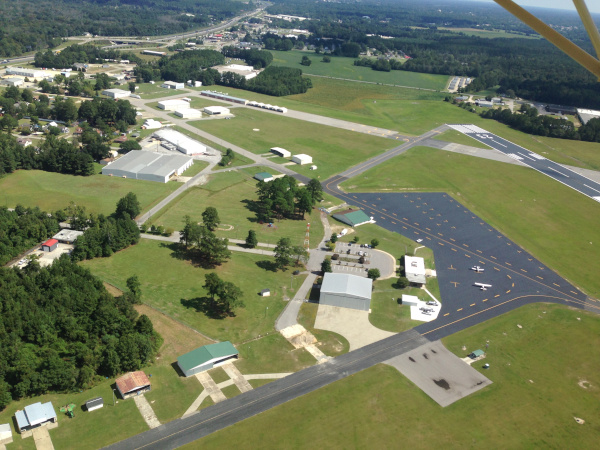 In addition, Gammon says the Airport is considering designating property outside the Airport’s current perimeter that can be developed into buildable space for any aviation or non-aviation related businesses that may want to locate there. “The city zoned the area around the airport as the Airport Industrial Park,” he explains. “So, all of the adjacent properties are zoned commercial/industrial. And, if it is needed, we would have space where we could expand the Airport out. The city set it up that way.  For businesses that may want to utilize the Airport, but don’t want to be on the Airport, we have the ability to work with them. One of the visions of the Airport would be to put some kind of an MRO facility or flight department on, or near, the Airport.  We would work with them for whatever they would need. If it’s an aviation business – that’s great; a non-aviation business – that’s great. We’re just looking to be the economic driver that an airport should be to the local economy.” Currently, the North Carolina Department of Transportation estimates that the Lumberton Regional Airport contributes approximately $14 million, annually, to the local city and county economies.

The Airport has four full-time employees and three part-timers, all employed by the city. Its operating budget is two thirds funded by the city and one third by Robeson County. For capital project matching funds, the split is 50/50. Every year, the Airport also gets its FAA grant money through the State of North Carolina’s block grant program in which the state divides the FAA funds for different projects at different airports.

The Airport’s most recent projects included the addition of LED lighting, and a ramp and taxiway project that increased the ramp’s weight capacity to equal that of the main runway’s. “About ten years ago, they reinforced the runway; we had some issues where we would find holes,” Gammon recounts. “They did a study with ground penetrating radar across the entire length of the runway and found that we had all these voids underneath the runway.  When the War Department originally built it, all they did was knock down the trees, lay down gravel, and put asphalt over the top. Well, all those trees started to deteriorate and rot, creating the voids. So in 2007-08, they used injection foam molding – one of the first times they ever tried it – and filled all these voids. Recently, the same company came out to do a follow-up, and all of the foam is still in place and still supporting the runway. So, we alleviated what could have been a major problem by doing the injection foam and increasing the capacity of the runway.”

Gammon adds that the Airport is currently in the process of working out its ongoing ALP or Airport Layout Plan. “One of the things we’re looking at is expanding our 5,500ft runway to 6,500 or 7,000 feet to accommodate larger aircraft, and replacing a lot of the old infrastructure,” he relates. “The original FBO building was built in 1952; we’re looking at a project to tear that building down in order to build a new maintenance facility for somebody who would want to do maintenance at the Airport. We’re also looking at replacing some of the old, open T-hangars with newer, box-style, nested T-hangars. And we want to redo the ILS. Right now, our Instrument Landing System is set up with an outer marker and middle marker. We’re looking at changing that to DME.” (DME, or Distance Measuring Equipment, is a measuring device using ground and air components to determine the slant range of an aircraft to a point.)

Regarding any nearby competition for GA traffic, Gammon says Lumberton competes with Elizabethtown Regional Airport, Harnett Regional Jetport, and the Columbus County Airport in Whiteville. “But we’re the only one that has a crosswind runway,” he notes. “And we have a 5,500-ft. runway and a 5,000-ft. runway. The only other airport that has that is Laurinburg-Maxton. Also, we’re right at the intersection of Interstate 95 and Interstate 74, and we’re within five miles of everything in town, whereas most of the other airports are, at least, ten or fifteen miles from their respective towns. And we have hotels available within walking distance of the Airport.”

“Fayetteville Airport is the commercial airport that serves this area,” Gammon continues, “and it also serves a lot of businesses. However, on the highway, we’re only 27 miles away, and you can forego a lot of the fees if you come here, versus going to Fayetteville.  You don’t have the problems of TSA access and large FBO pricing.  So we have good access to the local area – either Fayetteville, Lumberton, even down to Florence, without the fees imposed at larger airports.”

In conclusion, Gammon touts the Airport’s advantages to potential users: “For GA aircraft, we have facilities available; we have crosswind runways; it’s a good stop on the way north or south on the east coast. For businesses, we are open to new business opportunities; we’re looking to expand and we’re willing to work with business to provide them with whatever they may need to operate out of our Airport. If somebody is non-aeronautical and they need access to the Airport, our entire surrounding area is an industrial park. So, if they’re looking to build, if they’re looking to move into the area, we have the capability.”

WHO: The Lumberton Regional Airport

WHAT: A general aviation, public-use airport

WHERE: Four miles west of Lumberton, a city in Robeson County, North Carolina