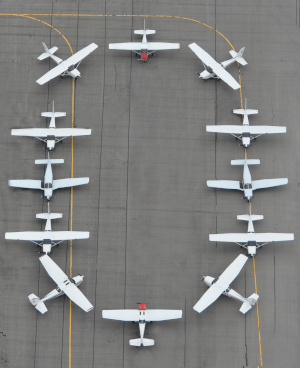 As the university’s undergraduate aviation program, The Center for Aviation Studies provides funding for research projects, student scholarships, and fellowships, and conducts economic and public policy studies and technical projects. In September, 2012, the Federal Aviation Administration selected the Center for Aviation Studies as part of a consortium of universities to lead a new Air Transportation Center of Excellence (COE) for general aviation. The COE focuses on research and testing efforts on safety, accessibility, and sustainability to enhance the future of general aviation.

In addition to its valuable role as an aviation education center, the Ohio State University Airport is a premier general aviation airport that serves the needs of Central Ohio businesses and is home to the corporate flight departments of numerous Central Ohio companies. It also includes several on-airport businesses and agencies including MedFlight, a non-profit air and ground critical care transportation company that completes nearly 7,000 transports by helicopter and Mobile Intensive Care Unit each year. Also at the airport is the Ohio State Highway Patrol’s Aviation Section, which enforces traffic safety laws and assists motorists on the state’s highways, and the Ohio Department of Transportation’s Office of Aviation, which conducts various functions for aviation customers throughout Ohio. Other common activities include air cargo operations, environmental patrol, military exercises, and aerial photography. All told, the airport generates around $570 million a year in economic benefit for the surrounding community.

“The University actually had an airport back in 1917, when it first started teaching cadets for World War I –  both pilots flying and building aircraft,” says Airport Director Doug Hammon, commenting upon a century’s worth of flight training sponsored by Ohio State. “That was shut down in 1920, because the Ohio State Stadium, where the Buckeyes play, was built on that site. In 1942, the University decided to get back to having its own facility, after having used several different smaller airports around the city of Columbus. So, it made the decision to purchase some land, and in late ’42-’43, started constructing the airfield and the first buildings located here at the airport.”

“It started out as a training facility for both Navy pilots and for what the federal government had going for a civilian pilot program,” Hammon continues. “So, it did both military and civilian training. The airport stayed just that, for years, within the university, as an internal, private use facility, mainly for training. It wasn’t until 1959, when the university received its first federal grant for some improvements that the airport became a public facility, open to anybody that wanted to come in and out.”

“The airport began expanding at that time, accommodating the newer aircraft. The first jets were based here in 1962, and there were new runways over the years and new hangars. And today, the airport is the third busiest airport in Ohio, based on the number of takeoffs and landings. It’s in the top five percent, nationally, of all towered airports, and is a national priority general aviation airport in the eyes of the FAA. We are a reliever to the John Glenn Columbus International Airport, and we are certified through FAA-Part 139 for commercial service; we don’t have any commercial airlines operating, but we do maintain our certification.”

Hammon adds that the Ohio State University Airport is one of about 30 airports owned by universities around the country, but only one of three that is owned by a Tier One research institution. Therefore, he states that the airport’s first priority is “to support and fulfill the University’s ‘learning, discovery, and engagement mission’ – supporting academics, supporting research, and supporting outreach to the community. We do that in a number of different ways. We operate the university’s Flight Education program, while several of the airport staff participate in classes. We estimate that there are about 350 students who utilize the airport each semester as a classroom. We also employ a number of university students so they get that real-world interaction. And we host research projects – we don’t do the research, but we have the facility where faculty can come out and do it. About 65 faculty members utilize the airport each semester. And regarding outreach to the community, we have estimated we connect with about 3,000 kids a year, through various programs.”

“We’re also an airport,” Hammon reiterates, “and that’s what some people tend to forget. We often hear that ‘Ah, you’re just a flight school.’ No, we are the corporate airport in Central Ohio. We have 14 different corporate flight departments that are based out here, up to and including a Fortune 10 company. About 200 GA aircraft are based here – everything from a small Christen Eagle up to a Gulfstream 4.

The Ohio State University Airport is also one of four in Franklin County, and Hammon explains that each airport has carved out its own niche: “The John Glenn Columbus International Airport is the air carrier facility for the region. They have some corporate over there, but their role, in this region, is to serve the airlines. We have Rickenbacker, which was the old Air National Guard and Air Force base, which is more of a cargo facility, now. They have Bolton Field, as their primary reliever, which they own. Then there’s us. One benefit we have, right off the bat, is location, location, location. We are in the corner of town that is seeing most of the corporate expansion, so we already have that natural customer base.

“So, we kind of all know what our niche is and what our area of influence is. The one thing we can say we have over many of the GA airports in central Ohio is the full-service FBO, open from six in the morning to almost midnight. We also have the fueling and chemical de-icing of aircraft, which up until a few years ago, when we started, no other airport except the big air carrier facility had done. And because we’re a certified airport under Part 139, we have 24/7 snow removal in the winter; we have the runway de-icing capabilities; we have wildlife management; and we have air crash rescue here on the field. So, not only are we available in all weather, but we also have those safety aspects that a lot of companies’ safety management systems and their insurance requirements are looking for.”

As the general aviation and corporate flight communities in the Columbus area continue to grow, Hammon reports that the Ohio State University Airport is currently focused on enhancements. It just completed the erection of 54 T-hangars, but it still has a waiting list of about 70 small plane owners, as well as more corporations that are also hoping to move in. “When we opened those up and people heard ‘hangars,’ within one month, we got a call from 20 companies that wanted to move their corporate flight departments here,” says Hammon, “which is why we’re looking at a corporate airpark.”

The airport has a 50-acre plot that it is hoping to utilize as the new corporate airpark, and the university is currently considering how it wants to deal with the building of new hangars. “We’re looking at a couple of different models,” Hammon says. “One is, the university builds everything – but it doesn’t have that kind of capital set aside to be able to do that. The other is to build the infrastructure and let individual companies comes in and build their own facilities. The third model is just to lease out the entire 50 acres and have a company that is in the hangar development and ownership business come in to build, own, and manage them with a ground lease from us. We’re in the process of building one hangar within the university, but we know that’s not sustainable to complete the rest of the area. We’re hoping that the university will make the determination, in the next six months or so, what the model will be, moving forward. Our preference is either to do the infrastructure and let others lease individual plots from us, or lease out the entire area to somebody and let them take on all the capital costs, and risks, and everything else.”

One reason the Hammon prefers either one of the last two options is that it would give the airport some needed revenue and get it to a point where it is completely self-sufficient. “We were self-sufficient up until the recession,” he notes. “Without the on-going needed improvements that will help diversify the revenue stream, we remained reliant on fuel sales. Well, when you hit a recession, one of the things people do is stop buying fuel, or they fly less. So, we were hit pretty hard. We’re getting back to the point, now, where we’re almost where we were, and we’re just teetering on the edge of self-sufficiency. With the ground leases, if we can start leasing out some of our excess land, that’s where we’re going to maintain that self-sufficiency and one that will be able to withstand any fluctuations within the economy. Once you lease land, you have a steady income.”

In addition to a future corporate airpark, part of the airport’s updated Master Plan includes an extension of its main runway, which, at present is 5,004 feet long. “We need to get up to 6,000 feet,” Hammon says. “We have a number of companies that fly international and they would like to go nonstop, and they just can’t do it in the 5,000 feet that we have, with the fuel loads that they need to take on. Getting that extra thousand feet will help them; they won’t have to stop at the coast to refuel. So, that’s going to be the other major airfield improvement that will carry us into the future.”

While those two projects may be in the airport’s future, presently it is witnessing the opening of a brand new edifice – the Austin E. Knowlton Executive Terminal & Aviation Learning Center. The new facility will be home to the airport’s administration offices, as well as the entire university flight program, and its onsite FBO. “It’s going to be the first time that all three operating arms of the airport –  the management, the FBO, and the flight program – will all be in one facility,” says Hammon. “Not only does it house those three operations, but it also has a conference facility – three 50-person classrooms that can open up to one large room. We already have, between now and the end of the year, about six events scheduled in those rooms. We also have a conference room for companies. And it’s the first time that most of us will be in something that was built after 1960.”

The new, $15 million building was funded by a $10 million donation to the university, plus some monies from the airport’s own coffers. “We’re also working on additional donations,” adds Hammon. “We got one of the fractional ownership companies to put up about $1.2 million for the naming rights to the lobby, and we have other companies that are looking at different rooms. This is what the university does; everything on campus has a name on it.”

As the Ohio State University Airport looks toward its second century of operation, Hammon maintains that it will continue to serve in its dual role. “What defines us most is balancing the two missions – that learning, discovery, and engagement role within the university and the community, and the corporate service that we provide,” he states. “It’s wearing those two hats. It’s a difficult thing to do, but I think we do it very well.”

Check out this handpicked feature on Furman University Center for Sustainability.

WHO: The Ohio State University Airport

WHAT: A teaching, corporate, and general aviation airport

WHERE: 11 miles northwest of Columbus, Ohio