Business View Magazine interviews representatives from Pennridge Airport, as part of our series on best practices of regional American airports.

Pennridge Airport is a privately-owned, public-use airport located one mile north of the central business district of the Borough of Perkasie in East Rockhill Township, Bucks County, Pennsylvania. The Airport was completed in 1965, when Joseph A. Gloster and William Hart Rufe III formed Pennridge Development Enterprises, Inc. (PDE). Gloster was a quarry owner and heavy equipment operator who laid out the runway, hauled the stone, and did the grading for the runway. Rufe, a lawyer, and later, a county judge, did the land acquisition and mortgage financing, contracted for the paving of the runway and construction of the first hangar and terminal building, and handled the paperwork to get the Airport licensed. The business plan was to develop a corporate complex catering to airplane-using companies around the Airport. 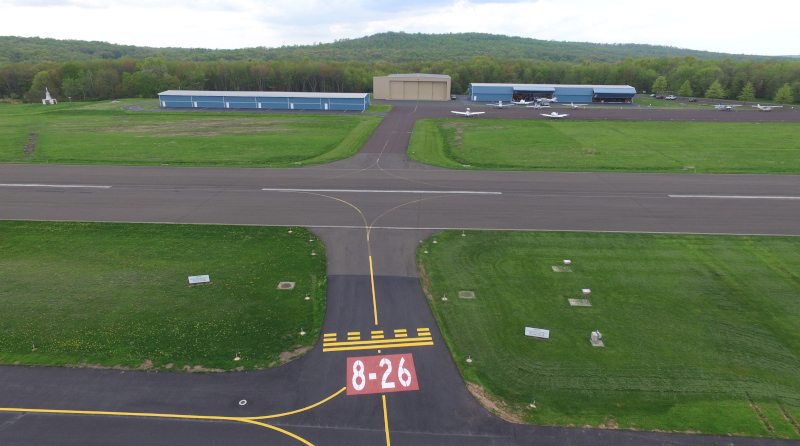 In 1970, Rufe bought out Gloster’s share of the stock and became the sole owner of the Airport. Later, the FBO fell in arrears on the rental and Rufe was in danger of losing the Airport. He was approached by a real estate developer who wanted to buy it to develop housing on the property. Neighboring property owners and pilots fought against the zoning change for real estate development, claiming the Airport was a huge benefit to the community. By 1981, Rufe had done considerable development planning and was nearing approval for all the zoning when he was approached by Andy Deutsch, who lived on a farm a few miles away and flew his own jet airplane. In August 1981 Rufe sold the corporation to Deutsch, who invested money into the Airport, including widening the runway from 50 to 100 feet and lengthening it from the original 4,000 feet to 4,215 feet. The original terminal building was torn down and replaced by a larger terminal with a hanger suitable for jet aircraft. A taxiway was constructed for the full length of the runway, and a complete navigation system was installed.

Today, PDE, which still owns the Airport, has resurrected Rufe’s original concept, which was to marry the airfield to an adjacent industrial park. “It’s been 50 years, and it’s finally happening,” says Rob Brink, President of Pennridge Development Enterprises. “It’s called Pennridge Airport Business Park and the first building is roughly a 100,000-sq.-ft., 32-ft.-clear, industrial building. And it’s 98 percent done.” According to the Park’s site plan, five more buildings are proposed, which, when completed, will offer over 690,000 square feet of space.

Ideal for production, warehousing, and build-to -suit requirements, the Pennridge Airport Business Park is located less than three miles from Route 309, which provides access to I-476, via both the Lansdale Interchange and the Quakertown Interchange. Route 309 also provides access to the Lehigh Valley and both I-78 and I-276. The Borough of Perkasie, just 35 miles north of Philadelphia, offers small town charm with big city accessibility and is a great place to live, work, and play. It has the largest municipal park system in Bucks County, with over 80 acres of parks and trails, plus unique housing, upscale shopping, excellent schools, restaurants, nightlife, and more.

“We’re courting several tenant prospects at the moment,” Brink reports. “In the next few months, we’ll have tenants lined up for that building. Our perfect customer is somebody that also needs to use the Airport with customers or employees that need to fly in. We want to take advantage of the Airport and the Business Park at the same time.”

In lining up prospective tenants for the Business Park, Brink understands that the Airport, itself, must be an attractive facility, and so he touts its advantages: “This Airport has a competitive advantage over all the other GA airports in this region because of its proximity to both Philadelphia and the Lehigh Valley, and because we have a significantly longer and wider runway with the capability to support mid-size business jets, where the other airports in our vicinity can’t do that. For those people or companies that use a mid-size jet, we are a much simpler solution than trying to deal with Philadelphia International Airport or Lehigh Valley International Airport. And we have the capabilities they need to come and go – basically, privately, and simply. We offer convenience that you can’t get at the major airports.”

But Brink is also forthcoming about one of Pennridge’s current challenges – a lack of hangar space. Presently, there are about 55 GA aircraft home-based on the field, and Brink says that people are constantly calling for more hangars. But being a privately-owned airport, the search for funding can be daunting. Pennridge doesn’t qualify for any federal money via the FAA, although it does receive Pennsylvania Department of Transportation Bureau of Aviation grants. “In fact, in the last three years, we received about $1.8 million in grants and we made some significant improvements to the Airport with that money,” Brink states.

“But in an airport like this, there are only two ways to make money,” he continues. “One is in leasing space to store aircraft, and the other is in fuel. There are some tiny other things, like landing fees, but that doesn’t amount to much. So the money is in hangar space and fuel – particularly jet fuel. Jet airplanes use a lot more fuel and the jet fuel has a better markup than what’s used for general aviation planes. So, the theory was to get approval to build a couple more hangars capable of holding mid-size jets. We’re capable of supporting mid-size jets and we have two that are resident, right now, and we want to attract more of those. We went through the process of getting approval for those hangars with the local municipality and we have approval to build them. Whether we build them, or not, is still up in the air, but we wanted to get the approval done, so if we decided we wanted to build them, we can.

“We may also go back to the Bureau of Aviation and ask for some grant money to help us build those hangars because it’s a very large capital outlay and it takes a long time to get that money back. These hangars would be focused on business aircraft that would be flying quite a bit and using jet fuel. So we’d have the advantage on the rental of a more expensive space and also more jet fuel sales. So, our biggest limiting factor, right now, is hangar space. We can’t have more resident planes because we’re full. In order to grow this Airport, we need more hangars. And that’s an economic question. If you’re going to lay out millions of dollars to build new hangars, how long is it going to take to get it back?

So, Pennridge Airport has two mutually beneficial goals as it prepares to grow – to attract more companies that can utilize the airfield’s capabilities to locate in the Business Park, and to build more hangars so that companies who have mid-size jets will want to come and take advantage of the Airport’s location and, perhaps, also utilize the prospective spaces and amenities of the Business Park.

Airport Manager, Jean Curry, and Airport Operations Manager, Iyan Bass, both believe that as the word begins to get out, progress will soon follow. “I say this Airport is a diamond in the rough,” Curry declares. “It could be a really great regional airport if we could get the right tenants in here.” Bass agrees: “I think for a long time, because the Airport was, and still is, privately-owned, and a lot of people didn’t know about it, they took their business elsewhere or flew right over,” he opines. “So, it needs to be advertised a little bit. The more we get Pennridge Airport on the map and the more people realize what our capabilities are, that will help us out a lot.”

WHAT: A privately-owned, public-use airport

WHERE: In the Borough of Perkasie in East Rockhill Township, Bucks County, Pennsylvania

The Allen County Airport – A diamond in the rough