Business View Magazine interviews Ian Turner, Director of Aviation at Pueblo Memorial Airport as part of our series on regional airports in America.

Pueblo Memorial Airport is a public-use airport dominated by general-aviation and commercial air service activity. It is located six miles from downtown Pueblo, the county seat and most populous city in Pueblo County, Colorado. The Airport was built in 1942 as a U.S. Army Air Corps flight school where crews for B-24 Liberator bombers received advanced training. 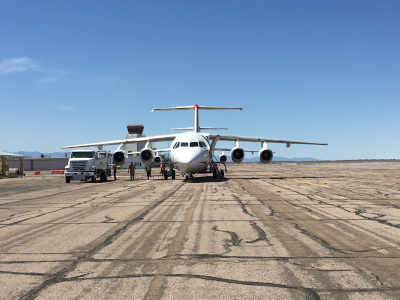 “The Airport is named in memorial of the B-24 pilots who trained here,” explains Director of Aviation, Ian Turner. “The city took over the facility in 1953 after the Federal government gave a number of airports across the country to municipalities through the War Surplus Administration, and it’s served in a municipal capacity since then.”

The passing years have seen many changes at Pueblo Memorial, although the connection to America’s military remains. “Today, we have three runways in a slightly different configuration; the longest being 10,496 feet, which is large enough to operate C-5 Galaxies,” says Turner. “Our primary user is L-3 Doss Aviation, which is a private company. They hold a contract to train all of the United States Air Force pilots and to conduct their initial flight tests. They account for about 90 percent of our 180,000 operations a year.”

Pueblo Memorial is also home to charter operators and United Express, a commercial carrier that provides service to and from Denver, which is about 150 miles away. “We also have the presence of about 70 private, general-aviation aircraft on the field, and a number of businesses, including Rocky Mountain Flower, our FBO, or fixed-based operator, which handles a growing number of business jets that are either coming here to southern Colorado or stopping here for fuel on their way to destinations on the east or west coasts.”

Approximately 50 percent of the Airport’s revenue is generated from leases, rents, and fees, and the City of Pueblo provides the remainder of its operating funds. The Airport has 11 full-time employees and three part-timers, but its impact on the surrounding community is far greater than those numbers indicate. Turner says the most recent study by the State of Colorado, conducted in 2013, found that the airport supported 827 jobs, with a payroll of just under $22 million, and a total economic impact of $85 million. He believes those numbers have only grown due to significant growth in the Pueblo area over the last few years.

Turner points to several factors that provide Pueblo Memorial with a competitive advantage over other small airports found throughout the Front Range, or southern portion of the Rocky Mountains: “The comment we get here most often is, ‘It’s easy to get in and out of Pueblo,’” he says. “We don’t see the level of congestion in the airspace that the Denver-metro area has or Colorado Springs, for that matter. So that makes us a nice place for people who are just passing through to stop, take a break, and refuel. The other competitive advantage is our location on the Arkansas River Valley, next to the Rocky Mountains. We see more than 300 days of sunshine each year, so weather stoppages here are not a big issue, whereas pilots transitioning cross-country up north can encounter a number of conditions – wintry weather or thunderstorms. We see quite a number of diversions from airports to our north during thunderstorm season.”

The area’s cost of living, relative to communities to its northern neighbors, also makes it, and Pueblo Memorial attractive. He adds, “Housing prices are significantly lower in Pueblo County than they are in El Paso County or the City of Denver, or Jefferson County and Broomfield, up north. We are, in some cases, half that cost. That affordability transitions here to the Airport. We’re a pretty affordable place to base an aircraft or build a hangar or bring a business.”

Pueblo’s advantages also include having plenty of land available for development and what Turner describes as an “historic” FBO. “I’m in my fifth state working in airport management, and Rocky Mountain Flower FBO is, by the far, the nicest stand-alone FBO location that I’ve seen,” he declares. “They provide a level of service that, in my opinion, can’t be beat, even by the larger FBO chains out there.”

One thing Pueblo Memorial shares with similarly sized airports is a need for additional hangar space. Turner says the Airport’s 20 t-hangars are all full and there are 10 people on the waiting list. There are also 25 privately-owned hangars on the property, all with ground-leases.

Pueblo Memorial is in the midst of a runway expansion project, for which it received a $4.5 million grant from the FAA. An application has also been submitted to the FAA for another $4.5 million grant for the next project on the to-do list – revitalizing the Airport’s aprons and some safety improvements.

“Looking long term, my first priority is to support our current tenants,” says Turner. “They’ve made the investment in the Airport and they’ve been here, in some cases, 50 years or so, if you’re talking about the FBO. They deserve the city’s support and my support in the growth of their businesses. Also, looking into the future, I’d like a maintenance and repair organization, an aircraft interior manufacturer, an avionics shop, or something along those lines, to be relocated to Pueblo. As we continue to see the growth in the community I think the aviation market here is going to grow.”
“I get half a dozen calls a month and they’re looking to relocate a business from another location, or somebody wants to build a hangar,” Turner says, in summation. “That’s really picked up in the last six to 10 months and that’s quite a difference, from my understanding, from prior to my arrival in 2016, and for the last 10 or 18 months that I’ve been here. So stay tuned.”

Check out this handpicked feature on the Grand Junction Regional Airport – Change is in the air.

WHAT: A public-use airport dominated by general-aviation and commercial air service activity