Home to the 139th Airlift Wing

The Rosecrans Memorial Airport is a joint civil-military airport located three miles northwest of St. Joseph, Missouri. It was named in honor of Guy Wallace Rosecrans, a sergeant in the 153rd Aero Squadron, U.S. Army Air Service, 1917-18, who was a native of St. Joseph and the only local airman killed in World War I. The current site of the Airport, in an area once known as French Bottoms, is actually its third location; in 1922, the first Rosecrans Field was opened at Lake Contrary; the second was Rosecrans Municipal Airport on the waterworks road, abandoned because of its small size and its dangerous proximity to the Missouri River bluffs to its east.

In 1939, the current Airport was developed by the city as a municipal facility with two 3,000-ft. runways. During World War II, the federal government took it over and established an Army Air Forces base, doubling its diagonal runways in length and adding another 5,500-ft. north/south runway, along with an aircraft parking apron and some temporary buildings, many of which were damaged beyond repair in the Great Flood of 1951. In 1948, much of the Airport was conveyed back to the city, except for 142 acres set aside for use by the Air National Guard. Over the years various pieces of the Airport’s infrastructure were built and/or rebuilt. Today it has two runways: 17/35 at 8,061 X 150 feet, and 13/31, 4,797 X 75 feet. 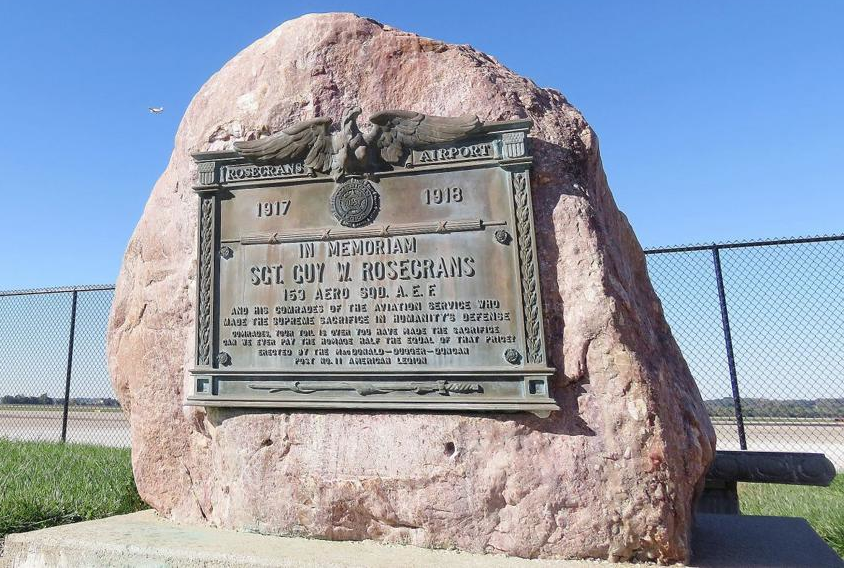 At one time, the Airport hosted commercial traffic – former airlines included Mid-Continent, Braniff, Frontier, Ozark, and TWA – all of which had pulled out by the time the Kansas City International Airport opened in 1972, some 30 miles south of St. Joseph. Since then, Rosecrans has been used for crop spraying, non-scheduled charter service, pilot training, general aviation, and as the home of the 139th Airlift Wing (AW), an Air Mobility Command-gained unit of the Missouri Air National Guard. An additional tenant command at Rosecrans is the Advanced Airlift Tactics Training Center (AATTC), a combined activity of both the Air National Guard and the Air Force Reserve Command. Both the 139 AW and the AATTC are made up of a mix of approximately 400 full-time Active Guard and Reserve (AGR) and Air Reserve Technician (ART) personnel, augmented by over 1,000 traditional part-time Air National Guardsmen and Air Force Reservists.

The presence of the Air Guard is been a boon to the local economy, generating over $200,000,000, annually. It also helps the Airport get enough funding to update some of its infrastructure. In order for it to keep its collection of C-130s flying, which require the Airport’s longer, 8,000-ft. runway, the Guard pays about 65 percent of all project costs. So, Rosecrans was able to resurface its 5,000-ft. crosswind runway, recently, and the main runway is scheduled for reconstruction sometime in the next three years.

Abe Forney is the Aviation General Manager at Rosecrans, one of six city employees who operate and maintain it. The Airport is not self-sufficient; it receives some financial support from St. Joseph – a situation that Forney would like to change. “We have a lack of industry and ground leases on the field, so our fuel flowage fees are, basically, our bread and butter,” he explains. “But the State of Missouri allows for business plans to be funded through a grant, so my plan is to get a marketing plan pushed forward to try and get our name out there. It’s in our Master Plan to build some large corporate hangars, which is something that, I believe, could generate some more revenue. With our 8,000-ft. runway, we have the possibility to hold some pretty big iron. I’d like us to make money and the only way we’re going to do that is to get some corporations in here.”

Forney adds that he would also like to see a cargo operation set up shop at the Airport. “We don’t have cargo; we’re so close to Kansas City International that it’s been hard for me to get somebody to move their cargo facility up here,” he laments. “But we have the potential, in the near future, to have a large apron space available for some type of cargo. We’re close to freight and rail and the port on the river. So, we have good potential. And, we’re far enough away from Kansas City so that our airspace is less congested and conducive to doing some type of training. We have all the amenities, plenty of infrastructure, and extremely competitive prices.”

Finally, Forney says he would also like to attract a Boeing or a Lockheed Martin type of company to Rosecrans, touting its advantages as a joint military/civilian facility. “We have a good airspace, so if a defense business wanted to come out here and so some testing of drones, or whatever, we have the military here, we have the civilian side, so it would be very conducive. We have the infrastructure, we just need them to come, and, hopefully, I can have the Airport be better than self-sufficient in the next five years.”

WHO: The Rosecrans Memorial Airport

WHAT: A joint civil-military airport