Servicing St. Louis for over 50 years!

The Spirit of St. Louis Airport is a public, general aviation airport located 17 miles west of the central business district of St. Louis, Missouri near the city of Chesterfield. Owned by St. Louis County, this thriving aviation hub (affectionately known simply as ‘Spirit’) has been the Business Aviation Center of the Midwest for more than 50 years and is named after the famous “Spirit of St. Louis” aircraft; the custom-built, single-engine, single-seat, high-wing monoplane flown by Charles Lindbergh on May 20–21, 1927 on the first solo nonstop transatlantic flight from Long Island, New York to Paris, France.

Ideally situated at the heart of the region’s westward expansion and growth, Spirit of St. Louis Airport provides immediate access to the business and financial corridors of the metropolitan St. Louis area. Over 3,000 people are employed by more than 150 businesses at the airport, which is touted as “an excellent location for your company’s operation.” Spirit provides the environment and physical assets necessary to meet and maintain world-class aviation support services, combined with “down home” Midwest hospitality and first-class professional facilities and personnel, including four full-service Phillips Aviation Performance Centers (APCs). A 7,485 foot all weather runway, 5,000 foot parallel runway, precision approaches, FAA Control Tower, and 24-hour Customs Services are all available onsite.

Funding for the airport comes from revenue generated through wholesale fuel sales, land development, and real estate rental. With an annual economic impact of $400 million on the surrounding community, Spirit continues to be self-supporting and profitable – re-investing profits into its operations to improve facilities and promote the growth of aviation in the St. Louis region, as well as non-aviation businesses in the community at large.

According to John D. Bales, Spirit of St. Louis Airport’s Director of Aviation, the airport was the vision of Paul Haglin, an aerospace engineer who worked for MacDonnell-Douglas in the late 1950s. “Paul was an avid pilot who flew his blue and white Cessna 195 out of Lambert Field,” Bales reports. “He’d sometimes have to wait for hours to depart, and saw the need for a new airport. There were a lot of small airports in the area but Paul envisioned a business aviation airport – image that in the late ‘50s! Way back then, he figured that business aviation was the wave of the future.”

As the story goes, one day Haglin flew over Chesterfield Valley and spotted some property he thought was perfect. So he formed a land company and proceeded to negotiate with farmers and landowners to buy the acreage. At the time, some of the property was purchased outright and some was acquired under 99-year land leases. Then construction began and the new airport opened in 1964 with Paul Haglin landing the first aircraft. A newspaper article in 1965 stated that Spirit had a 5100 ft. runway and was the largest privately-owned airport in the world. Throughout the ‘60s it continued to grow.

“We had our first jet in 1966 and hosted the National Air Races in 1968,” says Bales. “Into the ‘70s, the airport continued to prosper. It was a one-runway airport and traffic was getting so busy that they acquired a used tower and had it constructed onsite. Then in the mid-‘70s the airport was considered endangered, because in those days private airports were not eligible for public funding. So they persuaded St. Louis County, the current owner, to pursue a grant from the FAA to acquire Spirit, and in 1980 it became the property of St. Louis County government. Throughout the 1980s, business had grown so much we needed to add a parallel runway and a full 110-ft. tall control tower, which was handed over to the FAA for them to man.”

Then came the Great Flood of 1993 that took out 13 airports across the Midwest. Spirit was not expected to flood and had 700 airplanes at the facility. When the levee was breached on July 31st, all but a handful of airplanes were evacuated; with the exception of some that were in for maintenance and a couple of large jets that they couldn’t get out in time. The airport was under 13 feet of water at the peak, but the people of Chesterfield Valley came together and rebuilt it in record time. Spirit was reopened in 90 days and completely operational in 180 with all the tenants back in place. The good news continued in 1995-96 with the quick development of 50-plus acres with FBOs, large maintenance operators, and various buildings. In 2000, The Landings at Spirit opened. A gorgeous 200 acre, FAA approved 18-hole golf course now sits to the south of the main runway. Underneath it lays a state-of-the-art storm water detention system, complete with adjustable 250,000 gallon irrigation storage tank.

According to Bales, “As of today, Spirit is a self-supporting public entity of the St. Louis County government that’s run like a private business with very strong cash reserves and no debt. We are an award-winning, 139 certificate airport that has 24-hour Customs with a full-time port director, over 400 based aircraft, and more than 100 based jets. There is a waiting list for our T-hangars and space is very tight for our larger FBOs. Under the 139 Air Carrier certification, we are a class 4 which means we can handle and receive large, unscheduled air carriers. It allows my staff to maintain the airport at the highest standards possible.” 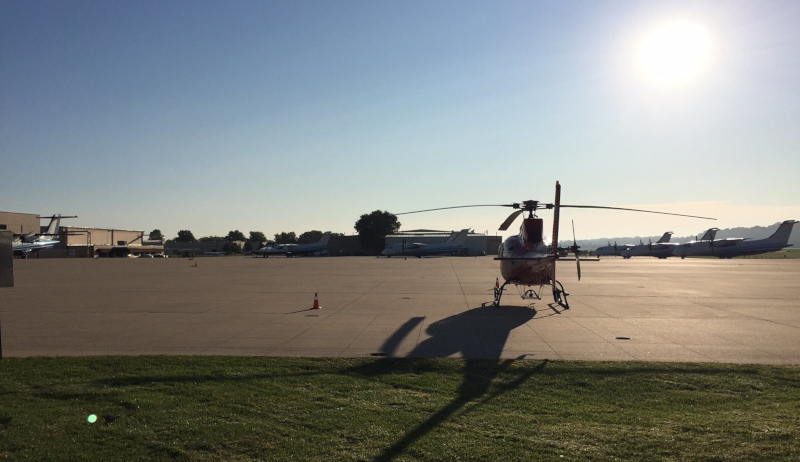 Last year, Spirit leased a five-acre parcel of land to an existing maintenance operator that added a 45,000 sq. ft. maintenance hangar, continuing its mission to add jobs and increase economic development and impact. In 2007, a north parallel taxiway was built to the north runway with extended infrastructure. The airport paid for the streaks, received grant funding for the taxiways and that is now classed as future developable land. In addition, major work was done on the north runway, and a state-of-the-art U.S. Customs and Border Patrol General Aviation facility was recently built to handle that significant part of the airport business. A five-year Strategic Business Plan update is now underway. As part of that plan, the main parallel taxiway is set for rehab this year. Next year will see the north runway widened and strengthened; in 2022 the main parallel runway will be rehabbed; and in 2023 access roads will be built. Long-term plans include shifting the north runway farther north – expanding it from 5,000 by 75’ to 5500 by 100’ to accommodate all the jets when maintenance is being done on the main runway.

Another advantageous Spirit attribute is its role as a wholesaler of fuel. “Fuel does not just flow through the Spirit of St. Louis Airport,” says Bales, “we buy it. All the FBOs purchase it from us. It ensures that everyone that flies in here is going to get the same quality of fuel. The current contract is with Phillips 66 and they provide us incredible training, service, and supply. At one time, we were one of the biggest aviation fuel providers in the country and that’s one of our revenue sources. So that’s very important.”

The airport’s annual air show focuses on Science, Technology, Engineering, and Math. “Because our industry needs more pilots and technicians and engineers,” Bales explains. “Every Friday before the show, we invite about 100 school kids and they get to explore our STEM Expo. I can take a group of schoolkids down to a corporate hangar where they’re able to interact and talk with the corporate flight team about why business aviation is to important to the economy and what a great opportunity it is for a career.”

Spirit of St. Louis Airport is 55 years old and in that time has only had two Airport Directors. The first, Richard Hrabko, stayed 43 years; and Bales started in 1994 as Deputy and became the Director in 2007. “Having that consistency and vision is so valuable,” says Bales. “With 3000 employees and international traffic, the tenants work together almost like a family. We consider ourselves the Business Aviation Center of the Midwest and that’s the traffic we go after. Each year we increase our land development and jobs and economic impact, and that’s something we’re out working on every day. Overall, while there is competition among tenants, everyone tries to support each other. Spirit is a very business friendly airport; we work closely with our tenants. We consider ourselves a partner, not a landlord.”

The Rosecrans Memorial Airport – Home to the 139th Airlift Wing