The Sault Ste. Marie Airport is an international airport located nine miles west-southwest of the city of Sault Ste. Marie, Ontario, Canada, at the far eastern end of Lake Superior and the beginning of the St. Mary’s River. The Airport was originally built by the Canadian government in 1961, and operated by Transport Canada, whose mission is to promote a safe, secure, efficient, and environmentally responsible transportation system throughout the country. In 1994, Transport Canada initiated the Airport Divestiture Program, offering to transfer airports within the National Airports System, as well as regional and small local airports, to any non-profit corporations, municipalities, or government agencies willing to take them over.

According to Terry Bos, President and CEO of the Sault Ste. Marie Airport Development Corporation (SSMADC), there was no interest from the city, at the time. “It was losing, roughly, a million dollars a year while it was being operated by the federal government,” he recounts. “So, in April, 1996, a corporation was formed to do a feasibility study to determine if it was a viable option for a not-for-profit corporation to take it over and operate it. After the study was complete, and negotiations took place with the federal government, the Sault Ste. Marie Airport Development Corporation took over ownership and operation of the Airport on March 28, 1998. So, we’ve owned and operated the Airport for 21 years, and it’s no longer losing money.”

Today, the Sault Ste. Marie Airport is exceptional in the fact that it is the only one of 23 regional, local, and small airports in Ontario that is owned and operated by somebody other than the municipal government where the airport is located. “We pride ourselves on being unique and I tend to think we do a good job,” Bos states. “The Board of Directors are local, so we can meet quickly and move quickly on any kind of business initiatives. We have no ties to the City of Sault Ste. Marie, and we get no operating funding from the city, the province, or the federal government.”

In fact, the Airport provides most of its own services, including emergency response and firefighting, water supply, sanitary sewage treatment, snow removal, vegetation control, and facility maintenance and repair. It comprises 400 acres of airside land and has two 6,000-ft. runways. It is home to 15-18 general aviation aircraft, housed in two sets of Airport-owned T-hangars that have six units each, and two-privately owned GA hangars. It is served by two cargo carriers, FedEx and Skylink, and four commercial airlines: Air Canada, which offers daily flights to and from Pearson International Airport in Toronto; Bearskin Airlines, which is known for scenic flight destinations across Northern Ontario and points west; Porter Airlines, which offers regular flights to many destinations in eastern Canada and the U.S.; and Sunwing Airlines which offers seasonal flights to tropical locales.

The SSMADC has 21 employees at the Airport, and, according to Bos, when you add up all of the tenants’ employees, the number reaches between 350-425. “Our largest tenant is JD Aero, which is an MRO/FBO, and they employ about 140 people,” he notes. JD Aero Technical is a Transport Canada Approved Aircraft Maintenance Organization that offers a full range of aircraft services to the regional commuter market. It specializes in the Dash 8 and CRJ series aircraft, providing services to airlines and operators world-wide. Its facilities at the Sault Ste. Marie Airport include two large bay hangars totaling over 60,000 square feet, offering aircraft, structures, and avionics repair capabilities, and FBO services.

The Airport is also home to the Aviation, Forest Fire, and Emergency Services of the Ministry of Natural Resources and Forestry (MNRF). From its 5,700-square-metre facility, its Aviation Services Section provides aviation flight and maintenance crews, equipment, and other specialized aviation services, including non-scheduled air transport to all government ministries and agencies. MNRF administrators, aircraft maintenance engineers, warehouse personnel, and pilots comprise a group of 60 full-time staff. In addition to its hangar and office space, there is a 622-square-metre flight training facility that includes a state-of-the-art training simulator for the CL-415 Water Bomber. The simulator provides a complete simulation of the aircraft, including water scooping on lakes and drops on fires, and is the first of its kind in Ontario.

In addition, there is Sault College Aviation, considered one of the best flight schools in Canada; Eagle Feather Aviation, a helicopter charter, sight-seeing, aerial work, and maintenance company; Sault Academy of Flight, another premier flight training center; and Humphrey Aircraft Services, offering aircraft maintenance and repair services for the general aviation community in northern Canada and northern Michigan. Humphrey’s operations take place at the Sault Ste. Marie Airport, and it is equipped to work with seaplanes and ski planes, as well as wheel-based aircraft. “Because it’s close to the water, it can pick aircraft right out of Marks Bay, across the road, and right onto our property,” says Bos.

Bos relates that his airport does compete with other nearby facilities in both the commercial and general aviation sectors. “Fortunately for us, the closest airports are Thunder Bay, which is about eight hours to the northwest of us, and then Sudbury Airport, which is about three-and-a-half to four hours east of us,” he explains. “So, on the Canadian side, we don’t compete so much, but on the American side, Chippewa County International Airport is only no more than a 15-20 minute drive down I-75. Our ticket prices are low enough that flying within central Canada and to the east and even to some of the eastern parts of the U.S. is competitive out of here. But flying to the west and into the U.S., we certainly face a lot of competition from Chippewa County. Going to Europe, we’re priced fairly decently out of here, as well. There are some Americans who will come over here and fly to the Eastern U.S. and Europe.

“When it comes to general aviation, there’s not a lot of facilities close to here, but there is a landing strip at Bar River Airport, Ontario; they’re about 30 minutes east of us, and, again, there’s a small airfield in Sault Ste. Marie, Michigan that would provide competition for general aviation, as well,” he adds.  “But for people flying into Canada, and Americans needing to clear customs, we’re close to the International Bridge, so there’s 24/7 availability of customs because our Airport is also open 24/7. Our air traffic control tower is only open 17 hours a day, but there’s a mandatory frequency outside of those hours, so, we do have a 24/7 operation and no restrictions.” 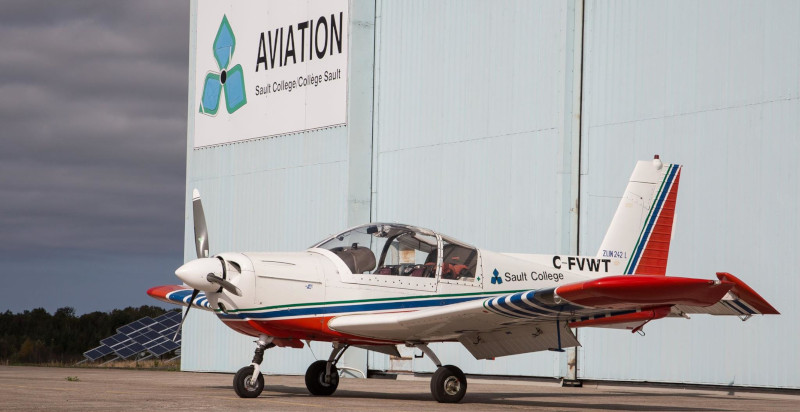 Bos says that since the SSMADC took over the Airport, it has invested some $42 million in capital upgrades. “In the last 5-7 years, we’ve done several million dollars worth of upgrades to our terminal building, mainly on the airside. So when you’re arriving, it’s a brand new looking feature,” he reports. “We’ve expanded our holding room and redesigned its layout, and in the future, we want to do the ground side of our terminal because it’s a little older looking. Our terminal is named after Borden Gray, who is a military veteran and who won the Blue Cross. We renamed our entrance road a few years back, to the Dr. Roberta Bondar Parkway in honor of Dr. Roberta Bondar, who was the first women Canadian astronaut in space. We’re proud of her being from Sault Ste. Marie.

“The original terminal is where our operations building is now and we still have to do some upgrades there – hopefully in the next 3-5 years,” he adds. “The main runway was redone in 2001, and our crosswind runway, we are looking to do within the next two, three, or five years, at the most. It’s an original 1962 runway, so we do want to get that work done.”

Going forward, Bos relates that the Sault Ste. Marie Airport is actively soliciting for new businesses to locate on almost 1,000 acres of developable land. “Hopefully, there will be some additional expansion here at the Airport, outside of what we’re doing in the next several years,” says Bos. “We’re always looking at new opportunities to diversify and expand the Airport, whether it’s aviation related or non-aviation related.”

WHO: The Sault Ste. Marie Airport

WHAT: An international airport

WHERE: Nine miles west-southwest of the city of Sault Ste. Marie, Ontario

The International Business Aviation Council – The voice for business aviation