Well-positioned for growth and development

Scappoose Industrial Airpark is a public use airport located one mile northeast of the central business district of Scappoose, in Columbia County, Oregon. It is owned and operated by the Port of Columbia County, an Oregon port district and municipal corporation, on behalf of district residents. With approximately 60,000 operations per year, Scappoose is the second busiest, non-towered, general aviation airport in Oregon. 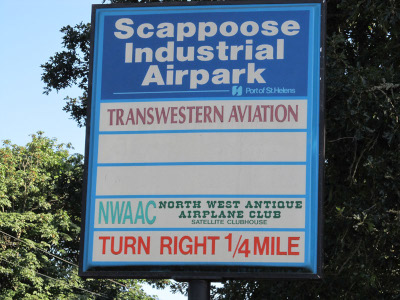 “As many fields are, today, it’s a legacy World War II field,” says Airport Manager, Craig Allison. “It was an auxiliary field for Fort Lewis, which is in Washington State near Tacoma. It was a very rough strip that was used for training and practice. It didn’t encompass a whole lot of surrounding area, but over the years, particularly since the late ‘80s and early ‘90s, after the Port became the owner, we have pursued a program of purchasing land and expanding the footprint of the Airport, as well as its facilities and capabilities. So, it’s experienced some steady growth all within the general aviation, community airport model.” Today, Scappoose Industrial Airpark covers 196 acres with a single asphalt, 5,100-ft.-long runway.

Allison adds that in the Scappoose Industrial Airpark’s early days, it was a place where the local residents could “go out anytime, pretty much unfettered. If there wasn’t an aircraft in a pattern, you could do drag races on it, the folks who’ve been around awhile tell me,” he reports. “That’s no longer the case, though. Since 9/11, it’s become a fully-fenced facility with control gates and security. But we do try to keep it available to the community and open it up as best as possible. We have some community events in the summer – fundraisers for various entities. We also just carved out an area in the north end of the field, at the community’s request, as a viewing area. It’s a small park with some picnic tables and a parking lot. It’s a place where people can hang out and be close to the approach end of the runway to watch the airplanes come and go, which was always a popular pastime.”

Scappoose Industrial Airpark is strictly a general aviation airport; it hosts neither scheduled commercial passenger, nor cargo flights. Its air traffic consists mostly of small, private aircraft, corporate jets, agricultural aviation, and flight training. “We do have an occasional military flight,” says Allison. “And helicopters; we have a gyrocopter manufacturer at the Airport that uses it.” Currently, about 130 GA aircraft are home-based there. “And that’s the capacity of our hangar facilities,” he adds. “We have approximately 135 hangars for rent of different sizes that we own and lease to the public and they’re consistently full. We actually have a waiting list at this point, but seeing as how the market is fairly steady, we don’t see explosive GA growth. And since we’re fairly close to capacity, with not a huge demand forecast, we have no plans at the current time to build any additional, basic GA, T-hangars. We would probably build-to-suit a larger hangar for a business client or somebody that wanted something along those lines. We do have a pretty robust market going on in corporate business clients that want to look at bigger facilities, and I have one in the works, right now, that’s a 27,000-sq.-ft. hangar building with offices and such for an aircraft charter operation. We also have, in the wings, some rough proposals to do some of the larger, corporate type hangars, but nothing’s materialized in terms of a serious project.”

While some small regional airports double as general business parks, Allison says, “All our businesses at the Airport are, in some way, aviation-related – whether it’s as manufacturers or repair services, flight training, or the FBO. We’re very closely tied to the FAA’s Airport Improvement Program and the grants they offer. So, we fall under their rules in the grant provisions, among which is the land that we either bought with their money, or has been improved with their money, must be devoted to aviation purposes. So, we really couldn’t bring in, say, a car dealer, or something like that.”

Regarding local competition, Allison states that Scappoose Industrial Airpark is in more of a complementary position with respect to the other airports in the area, although it does offer several advantages to certain aircraft owners. “The big kahuna in the neighborhood is Portland,” he notes, “which is about 25 miles south of us. They have Portland International and all of those services, and there are two satellite airports to the east and west. One is Hillsboro and the other is Troutdale. Hillsboro is a very busy spot; it’s a big flight training, as well as corporate aircraft, location. Troutdale is a little sleepier – a little more of a GA facility. We’re a little further out than either one of those, but our GA tenants tend to be local, or they really like flying in an environment that doesn’t have a tower and is not within the TCA (Terminal Control Area) of Portland, which is the case with us. It’s very easy in and out; very inexpensive, relatively speaking; and the traffic to get up here is less than going to one of the other airports. So, we have those kinds of competitive advantages. But again, we don’t view ourselves in huge competition with either of those, because they’re pretty much at capacity; they’re turning away people – at Hillsboro, in particular. We see folks coming to us who originally looked at Hillsboro, but then came to us because we were cheaper, we were more accessible, and we had space we could offer.” 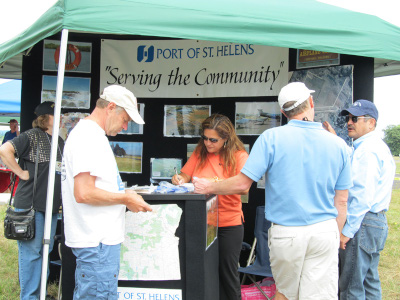 According to Allison, upgrading that space is an ongoing mission. “As I mentioned, we’re closely aligned with the FAA and their grant program and we’re always carrying a list of projects with them that we ask for funding on and get,” he remarks. “We’ve had miscellaneous infrastructure projects over the years, including roads and parking lots, lighting systems, and things like that. We did just finish one of our biggest projects, ever, which was to relocate one of our parallel taxiways further to the west – to rebuild it, as well as make it safer under current standards. We added new lighting and new cross taxiways; it was about a $4.2 million project. That also enabled us to confidently offer the field for operations by somewhat bigger aircraft. We’re still what they call a ‘B-2 field’ – B-2 being an aircraft designation based on length, performance, and tail height. But within that, we’ve increased the margin of safety and separation to allow operation by a greater group of turboprop or business jet customers.”

With a lot of commercial and corporate interest both inside and outside its property, Allison sees Scappoose Industrial Airpark as an essential part of a growing economy in a growing part of the county. “We offer it as a field that can service commercial clients in the area, whether they have facilities here or not and be part of that growth pattern,” he avers. “We have some land inside the fence that we would want to develop by building a facility for someone. And then, surrounding us is a great deal of open land, which has just been pulled into the urban growth boundary for our adjacent town, the City of Scappoose. So, our farmland has been opened up, under the state rules, for commercial development. And we’re seeing that happen – a lot of infrastructure development, land leases, in particular, outside the fence, but adjacent to the Airport. We have a state-sponsored consortium of large corporations and other educational entities that are working together to create a research and development park and training center near the Airport with tremendous potential. Big players like Boeing are involved. So, there’s a great deal of development opportunity with the potential for through-the-fence Airport access down the road.”

“We’re well-positioned for growth and development, while keeping our small-town, informal, accessible characteristics that we’ve always had,” Allison says, in conclusion. “We’re doing very well as a Port District and we’ve got the deep pockets to support the Airport and provide services and work with our tenants and potential customers. We’re a good professional group with good resources to help with development and the flying world. We’re excited about that and committed to it.”

Check out this handpicked feature on The Watsonville Municipal Airport – For general aviation.