Business View Magazine interviews representatives from the McAllen International Airport, as part of our series on U.S. regional airports.

The McAllen International Airport is a city-owned, public-use airport located two nautical miles south of the central business district of McAllen, a city in Hidalgo County, Texas. It is categorized as a small hub, primary commercial, service airport, whose mission is to foster an aviation environment that promotes air carrier, general aviation, and air cargo service in an economically viable, safe, secure, convenient, and competitive manner for the residents of the Rio Grande Valley and its international customers. 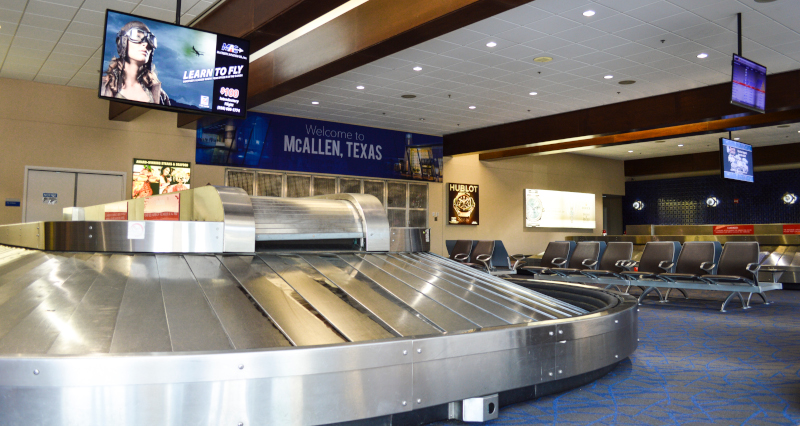 BVM: Can you speak a little about the McAllen International Airport’s history and its importance to the City of McAllen?

Suarez: “The Airport has been around since the late 1930s, primarily serving what was originally a strong agricultural area. There were some longstanding families in this area that contributed the land on which the Airport was developed. So, from the very get-go, there’s been a group of visionary families that have pushed aviation growth in our community. Its original focus was on small, general aviation. In the late 1960s, there was the introduction of some commercial service through our Airport. It’s still really instrumental in how our city continues to develop – the role that we have in our region, from an economic standpoint.

“Within our city limits, we have a population of about 138,000; our county population is 860,661. But within a 60-mile radius, from McAllen down to Brownsville, at the very southern tip of Texas, we’ve got a little over 1.3 million people. When you consider that across the border, in Mexico, we’ve got two large sister cities – adjacent to McAllen is Reynosa, and adjacent to Brownsville is Matamoros – you can say that our region has a population closer to 2.7 million. Airports have been crucial to how our cities developed and which cities are the leading economic centers, and McAllen Airport has helped make McAllen one of the strong economic centers in our region.

“In small communities like ours, connectivity is crucial. Our Interstate system access is limited, so airports are of the utmost importance. The proximity that we have to northern Mexico and the proximity that we have to other small cities that surround us, help to identify this Airport as key to the economic development in our area. We’re only nine miles away from Reynosa, Mexico, which means that there’s a lot of international business and also a lot of international general aviation passengers – they account for about 20 percent of our total general aviation operations. So, that continues to grow, as well.

BVM: How does McAllen International Airport compete with other airports in the region?

Suarez: “Within the 60-mile stretch, we have three Part 139 airports. In addition, there are a few other GA airports. But our main competitors are the commercial airports. Some of the things that set McAllen Airport apart are its central location in the region, where it serves as the geographic center in the Rio Grande Valley, its location in the more populated county, and its proximity to Northern Mexico. The McAllen/Reynosa area has become a key industrial area with over 600 manufacturing companies, also known as maquiladoras.  A strong population density, strong industrial growth, along with our close proximity to key Mexico economic centers like Monterrey, Mexico, have provided key business connections for the different motors within our economy and, ultimately, for our Airport.”

BVM: Can you talk about any recent or upcoming McAllen International Airport projects or upgrades?

Suarez: “In 2015, we completed our terminal expansion project; we extended our terminal by 55,000 square feet. We were able to construct two new gates, for a total of six gates. We were also able to incorporate different projects to include a CBIS (Checked Bag Inspection System) project, and we were able to update our inspection area for the TSA folks. Our terminal expansion project cost upwards of $22 million. Funding sources included FAA AIP grants, PFC (Passenger Facility Charge) funding, TSA funding, and local matching funds.

“We also completed a runway safety area project, where we were able to incorporate an EMAS (Engineered Materials Arrestor System) system which allowed us to make our runway safer. The EMAS project was a bit over $10 million. So, we’ve been busy in the last few years meet key business and infrastructure demands.

“Right now, we’re updating our Master Plan. Our primary goal within the next year or so is to have that completed. Incorporated into our Master Plan is a potential, parallel runway and a future potential extension of the existing main runway. In addition, the Master Plan calls for additional terminal space growth and additional cargo development. So, within our footprint, there is an opportunity to continue to grow the aeronautical services that we offer and the facilities that we have to house those services.”

BVM: How do you market the McAllen International Airport to potential new businesses, as well as the community in general?

Rodriguez: “We attend trade shows and business expos throughout the year to promote our airline partners, as well as the Airport. Additionally, we work closely with our local Chambers and Economic Development representatives.  We’ve also had some community outreach projects. We’ve developed a relationship with the Make-A-Wish Foundation’s local chapter. When we have a Make-A-Wish child flying out, we relay that information to the airline and TSA teams, and together, we work to offer a personal touch to the service the child receives.  We welcome them, answer any questions, and guide them through the whole check-in and boarding process.

“We’ve also developed a relationship with the Making Your Mark Travelling Art Exhibit on a yearly basis. That comes from the Vannie Cook Children’s Clinic for kids that often have a terminal illness. They paint and draw and we display those works for the public to see. Also, we have tours throughout the year; we partner with our FBO and we have 10-15 tours a year for the elementary schools to get them to know what aviation is about.”

Suarez: We’re interested in exploring opportunities to bring aviation to the community. Many kids in our community have never used an airport and are not likely to use one – ever. So we bring them to the Airport; we work with the schools; we have holiday programs where kids come to perform their Christmas and Holiday programs. We also do personalized tours for schools.

“We also host various interns – people that are teachers and curriculum professionals in local school districts. They spend a few days with us in the summer. We talk to them about incorporating different aviation themes into their curriculums, especially as we look to explore STEM learning opportunities. In a lot of the schools, there is a push to technical skills and technical paths. A lot those technical careers have transportation elements, so that kids who don’t have the opportunity to go to college can come out of high school with a technical degree.

“Not only do we want to be a contributing motor in our economy, we really want our community to know that aviation provides vast career opportunities. With the changing population dynamics in the country, as a whole, there will be great career opportunities in aviation in the future. More than anything, we believe in being a partner in the community and getting involved with our young citizens; it helps define us as unique.”

WHO: The McAllen International Airport

Since 1988, the McAllen Economic Development Corporation has been connecting the world’s biggest companies with the many benefits of doing business on the South Texas/Northern Mexico border. McAllen EDC attracts industrial development by promoting the unique flexibility that comes with binational manufacturing. McAllen EDC works with site selectors and executives to find the most convenient and profitable arrangement for their companies, offering not just a great place to do business, but an exceptional place to call home.

SITA is proud to be a strategic partner to McAllen International Airport for 25 years!

As the world’s leading specialist in air transport communications and IT, nearly every passenger flight relies on SITA technology. We work with our air transport owners and members to provide technology solutions that make a difference at a community level. Innovating collaboratively, while developing and managing solutions over the world’s most extensive network – forming the ’communication backbone’ of the global air transport industry.

St. George Regional Airport – Back up and running

Salem Municipal Airport – Getting from A to B