Convenience at the border

The Del Rio International Airport is located two miles northwest of the City of Del Rio, in Val Verde County, Texas, and only several miles from the Mexican border. A commercial and general aviation facility, the Airport encompasses 268 acres and has one 6,300-ft., asphalt runway. It is owned by the City of Del Rio and run by a seven-member Airport Advisory Board appointed by the City Council that is responsible for its operations and development. On the other side of the city, sits Laughlin Air Force Base, the largest pilot training base in the U.S. Air Force, and home to the 47th Flying Training Wing of the Air Education and Training Command. On weekdays, the AFB sees more takeoffs and landings than any other airport in the country.

Laughlin AFB, originally named Laughlin Army Air Field, was commissioned in 1943 to train B-26 pilots and aircrews during World War II. “When the war was over, they turned those fields back to the municipalities and counties,” says Juan Carlos Onofre, Airport Manager at Del Rio. “This one, in particular, was returned to Val Verde County in 1945. Since then, it was owned and operated by the county, but back in the 1960’s, the county turned it over to the city, and now, it’s run by the city.” 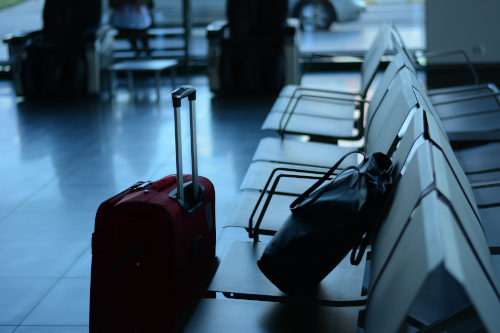 Del Rio International Airport is home to six on-airport businesses, which offer services such as fuel, pilot amenities, aircraft maintenance, and air cargo. It is also home base to 44 general aviation aircraft, and, unlike many small, U.S. regional airports, Del Rio doesn’t have a waiting list. “We have a lot of rotation on the hangar space, since we are neighbors with the Air Force Base,” Onofre explains. “There are a lot of Air Force personnel that have airplanes and they rotate their assignments every two or three years, so, currently, I have no one on a waiting list for hangars.”

Del Rio International Airport has been a Part 139-certified airport since 2005, and serves as an airport of entry for international flights. “We are one of the authorized ports of entry, so we get a lot of the general aviation traffic that comes back from Mexico’s vacation destinations,” Onofre notes. “They make a quick turnaround for customs and fuel and then go back to whatever city they came from –  charter planes, mostly. And because we’re sitting next to the border, we get all the commercial traffic from Ciudad Acuña, which is our sister city on the Mexican side. We get a lot of the ‘maquila’ industry – a lot of those things that are manufactured in Mexico and go to the United States, pass through here. So, we get a lot of that air freight traffic – car seats, air bags, car wiring – from Del Rio to the companies in the states.”

“The growing opportunities for doing business in Mexico, makes this an attractive airport, if you’re a USA company with a main office here and an extension in Mexico,” Onofre adds. “We have Alcoa, Blue Line, Caterpillar – those big companies see the importance of our strategic location and take advantage of having warehouses here on the Del Rio side and the Mexican side. So, we get a lot of those corporate flights here, as well.”

The Airport also serves as a training ground for pilots from Laughlin AFB, who utilize its runway, which is equipped with high-intensity lighting, and supported by VOR-A, ILS, and RNAV(GPS) approaches, in order to experiment with different types of landings and takeoffs.

Two recent additions to Del Rio are Rio Grande Aviation, an FAA-authorized repair station, and Southwest Texas Junior College, which is establishing an aircraft mechanic program, there. “They’re going to have their classroom here at a hangar,” Onofre reports. “In the near future, they are going to be able to graduate students who are capable of getting their mechanic’s license.”

Del Rio also has some adjacent acreage available, and Onofre says that the city has an economic development corporation that is trying to recruit businesses to a potential Free Trade Zone, with connectivity to the Airport. Currently, FedEx has a shipping  facility, there, next to one of the Airport’s ramps.

At the moment, there are no construction or upgrade projects going on at Del Rio, but that doesn’t mean that Onofre doesn’t have a wish list. “We’re trying to see if we can have a cargo facility that will be able to meet customs standards, so we can accommodate cargo inspection; we do not have that at the moment,” he remarks. “Our customs and border protection do not process any cargo at Del Rio – they just process passengers. Another one that is in informal talks is an extension of the runway. Right now, we have a 6,300-ft. runway, and the idea would be to extend it up to 8,000-8,500 feet, to be able to accommodate the new jets that the Air Force is going to have for training. That would be a big plus in support of the Air Force’s mission, and a big plus for us, because we could also accommodate bigger cargo planes. When you’re able to show that your airport is being used, you can get more FAA money to invest in your facility. So, it’s a win-win for us.”

Victoria Vargas, Public Relations Director for the City of Del Rio, neatly sums up the Airport’s main advantage. “We are the only airport with commercial service in about a 150-mile radius,” she states. “So, it’s very convenient, not only for our city, but for surrounding cities, including those in Mexico, to come to our Airport, then to fly to Dallas with American Airlines to wherever they want in the world.”