The Walla Walla Regional Airport is a commercial and general aviation airport located three miles northeast of the City of Walla Walla, in Walla Walla County, Washington, in the southeastern corner of the state, an area famous for its wines, wheat, and sweet onions. “The first municipally-operated airfield in Walla Walla was back in 1922, near our present-day Airport,” says Jennifer Skoglund, Airport Manager since 2009. That original airfield property was soon abandoned, but in 1929, the newly formed Walla Walla Airport Association, together with the local Chamber of Commerce, secured funding to establish a new facility, which the City of Walla Walla took over in 1930.

In 1942, the War Department took over and announced that it would be spending over $7.5 million to construct an Army Air Corps training airfield adjacent to the existing airfield at Walla Walla. “They built over 300 buildings and they were equipped to house, feed, and train, approximately 6,000 men at one time,” Skoglund continues. “During World War II, we were home to the 91st Bomb Group for B-17 training. The 91st Bomb Group made quite a few well-publicized missions in Europe. Then we also had the B-24 Liberator crews. When the military was done, they surplused the Army Airfield and that’s when the City of Walla Walla, and the County took it over.”

In 1989, the Port of Walla Walla assumed ownership and operational responsibility of the Airport from the city and county, and changed its name to Walla Walla Regional Airport. Today, the Airport encompasses 2,319 acres with one asphalt /grooved runway, measuring 6,527 by 150 feet. The facility also includes a college flight school, an FBO, a charter flight business, an ag-spray business, and many general aviation and corporate hangars. It is the home base of approximately 100 GA aircraft, and Skoglund suggests that there is “lots of land available for lease. So, we can certainly work with a developer or a private person who wants to come in and build,” she explains. “I wouldn’t be surprised if, in the next few years, we were to add some more T-hangars. We also have, from the war days, large, 11,000-sq.-ft.barrel hangars. So, we will have a couple of those available that will be fixed up and back on the aviation market.” 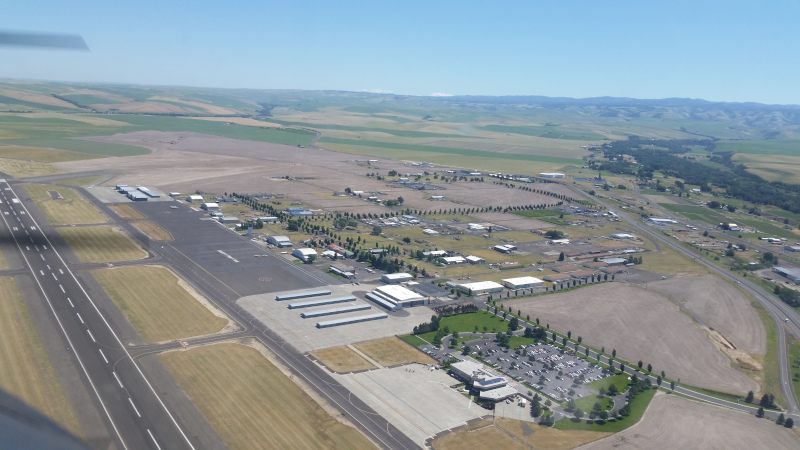 Over the years, Walla Walla has been served by a variety of commercial airlines, including: Portland Airways, United Airlines, Empire Airlines, Inland Airways, West Coast Airlines, Hughes Air West, Cascade Airways, Horizon Air, and Mountain West Airlines. “But as the planes have gotten larger, we are now down to Alaska Airlines, operated by Horizon Air,” says Skoglund. “We have daily service to and from Seattle, Washington. Our current schedule, depending on the time of year, is either two round trips, or three round trips, a day.”

In addition, the Airport is also home to many non-aviation businesses. “We have quite a diverse industry out here at the Airport,” Skoglund reports. “We have about 80 businesses – everything from small mom-and-pop businesses all the way up to a large winery or a large manufacturing business. We lease out the old army airbase buildings. On landside, we are home to about 17 wineries, three breweries, and two distilleries. So, our Airport District, aka Business Park, is a very popular space, and there is definitely land on the aviation side to build. The Master Plan has identified areas and then, on the non-aviation side, there is also plenty of land to develop, where we can do long-term land leases.”

Walla Walla Regional Airport has eight full-time employees, co-located with other Port of Walla Walla employees who provide administrative and accounting services. “We are fortunate to be port-owned,” Skoglund admits. “The Port of Walla Walla puts in money, each year, for certain projects; so that really helps us.”

The most recent Airport project, a $14 million taxiway reconstruction, completed last fall, was funded through the FAA’s Airport Improvement Program. “That was long overdue,” Skoglund notes. “It was old, 1942 concrete with many layers of asphalt overlay. For future projects, we’re looking at a study of our main runway for drainage and grading. We are also looking at some equipment procurement for snow removal and a new building. And we need to keep up with our apron rehabilitation; we have some old aprons that continually need maintenance. The security area in the terminal building, where the TSA works out of, at some point, will need to be enlarged, and also our holding room, especially if we go to a larger size aircraft, because, right now, Horizon Air has a 76-seat, Q400. And when you put that many people in the secure area, it gets pretty tight, so we’re looking at an enlargement project, in that regard.”

Regarding nearby facilities, Skoglund says that Walla Walla does leak some commercial passengers to the Tri-Cities Airport in Pasco, because that airport has multiple airlines and multiple destinations. In the GA realm, however, she believes that with its new FBO, Gorge Aviation, and its recent and upcoming improvements, Walla Walla will become more and more competitive as time goes by. “We have been without an FBO for a few years, which has been difficult, but we now have a full-time FBO and I think we have a very positive outlook for operations, here,” she states.  “I definitely see us being competitive with our other, nearby airports.”

Another competitive advantage lies in the fact that Walla Walla Regional Airport is the gateway to an area in Washington which has been experiencing a decided uptick in tourism. And with a lot of activity in the City of Walla Walla, as well as its surrounding countryside, Skoglund believes that Walla Walla Regional Airport serves as an important community partner, contributing to its economic development by getting people in and out of the Valley via commercial and general aviation.

“We have become quite the tourist destination,” she adds. “It’s not unusual that every weekend, we’ll see some jet out on the airfield, and our commercial passenger traffic continues, each year, to have record growth because of tourism. We are a wine destination in Walla Walla Valley; we are home to about 140 wineries. So, we have world-renowned wines and we’re getting people coming here from Seattle and the northwest, in general. And we’ve also been getting worldwide reception. Walla Walla was actually named, last year, by Travel & Leisure as one of the top communities to travel to. So, we’ve gotten a lot of recognition for tourism and that has really increased the use of the Airport in terms of commercial service passengers and general aviation. So, that’s been exciting.”