Westfield-Barnes Regional Airport is a public/military airport in Hampden County, Massachusetts, United States. It is located three miles north of the City of Westfield, and just northwest of the larger City of Springfield. Westfield-Barnes is one of Massachusetts’ largest airports with a strong flight training, general aviation, and military presence. A unique airport facility, Westfield-Barnes offers the capabilities and services of larger airports and the convenience of easy access to major hubs, as well as an attractive economic package for corporate, private, and commercial use. It is governed by an innovative Airport Commission dedicated to pursuing the development of the Airport and its services to meet the growing needs of business, industries, and the community.

From 1905 to around 1918, the area on which the Airport sits was once known as Camp Bartlett, a summer training facility of the Massachusetts Army National Guard. After the United States entered World War I, the expansive plain was heavily used by the federal government as a mobilization and training camp for the 103rd and 104th Infantry Regiments of the 26th “Yankee” Division, prior to their deployment to France. Aviation came to Westfield on July 13, 1914, when Jack McGee of Pawtucket, Rhode Island flew a Wright biplane over the city on a flight that originated on a strip of land near Southampton Road and the Holyoke Rail Bridge. McGee was hired by local merchants to drop tickets from his airplane which could be redeemed for prizes. 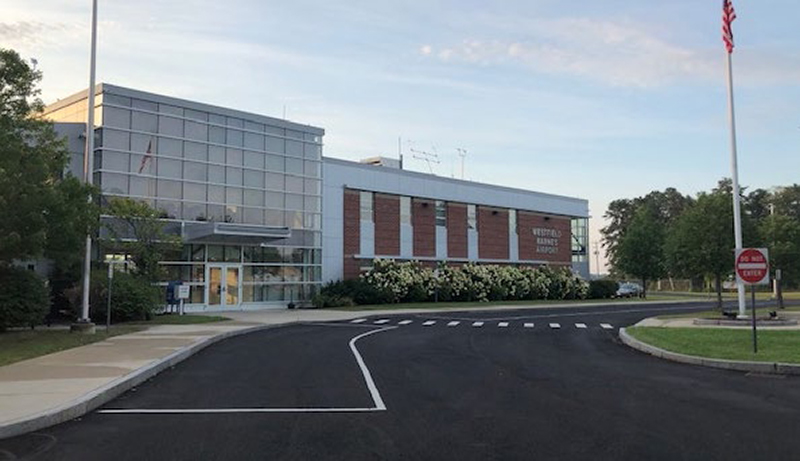 In 1923, the citizens of Westfield, and nearby Holyoke, set out to build an airport. A group of influential local businessmen from their respective Chambers of Commerce was charged to convince the owner of the property where the Airport is now, Vincent E. Barnes, to sell his land to the City of Westfield. Barnes, however, agreed to give up his land for free. The 27-acre plot was named Westfield Aviation Field, and was dedicated on October 12, 1923. As the field gained in popularity, Barnes leased the city another 27-acre plot, this time with a fee of $1 per year. In 1936, Mrs. Barnes and her daughter, Saddie Knox, donated an additional 297 acres to the City, and shortly thereafter, the Westfield City Council voted to name the Airport after the family that made it possible.

In 1939-40 the administration building, hangar, and the beacon light were built with grant money totaling near $90,000. On October 28, 1937, a 10-passenger tri-motor Stinson began weekly flights between Westfield and Newark, New Jersey.  In 1947, the Massachusetts Air National Guard based its 104th Fighter Wing at the Airport. American Airlines DC-3s operated out of Westfield from 1938 to 1950, and Mohawk Airlines DC-3s from 1953 to 1959. At the time, the Airport had three runways. In 1974, an air traffic control tower was erected.

Today, Westfield-Barnes Regional Airport comprises 1,200 acres, and has two asphalt runways: 2/20, which is 9,000 X 150 feet, and 15/33, which is 5,000 X 75 feet. It is overseen by a three-member Airport Commission and a management team of seven employees, headed by Airport Manager, Christopher J. Willenborg. Revenues from airport fees and property taxes on its aviation facilities total a little over $1 million, annually, with operating expenses less than $800,000, so it does operate in the black. The Airport does not have scheduled commercial service, but maintains it Part 139 certification as both the National Guard, as well as nearby universities, often utilize civilian air carriers, including Boeing 737s and Airbuses, as unscheduled charters. Approximately 125 general aviation aircraft are also home-based at Westfield-Barnes.

“We also have several major MROs here at Westfield,” Willenborg adds. “Gulfstream Aerospace has its northeast aircraft repair facility here and they have over 300 employees. So, we get hundreds of Gulfstreams that come into Westfield for aircraft maintenance. We also have Ross Rectrix Aviation, which is a national FBO chain. They also have an MRO facility – they work on small- to mid-size business jets, and they do quite a bit of avionics installations.  Also, we have a military component here with the Air National Guard and the Army National Guard. We have F-15s that sit on alert to protect the northeast of the United States. We have Blackhawk helicopters, medivac helicopters, as well as surveillance helicopters that respond to the community. We have Air Methods’ air ambulance operation based here 24/7. They’re providing emergency medical transport for trauma incidents all around western Massachusetts. And we have a diverse general aviation community, and several flight schools and they’re very active.”

Willenborg says that Westfield Barnes is able to compete successfully with several other nearby airports. “You have Pittsfield Municipal Airport about 40 miles to our west in the Berkshires; you have Westover Metropolitan Airport, which is a military-owned airport, but  with a civilian component; then you have Bradley International Airport to our south, about 15-20 miles away,” he notes. “I think what separates us is our Airport’s airside infrastructure. We have a 9,000-foot, primary, instrument runway and a 5,000-foot crosswind runway – not many airports have that long of a crosswind runway for general aviation. We’re a seven-day-a-week facility with full-time, 24-hour, ARFF services. There are no Prior Permission Required (PPR) requirements to use the Airport after the tower closes. We have the northeast alert mission for the Air Force, so our snow removal is tops in the region because we have to keep the runway open at all times – our primary runway is typically available unless we have a significant blizzard. Plus, we have great access from landside. We’re a mile from the Mass Pike, so we have great access east and west to access Boston and NY State, and then I-91 is about two miles away to go north and south to access CT and VT. Our fee structures and the cost of fuel and hangars are less here at Westfield than some of those other airports, particularly Bradley. Those are some of the advantages that we feel give us a competitive opportunity to attract new tenants as well as transient users to the Airport.” 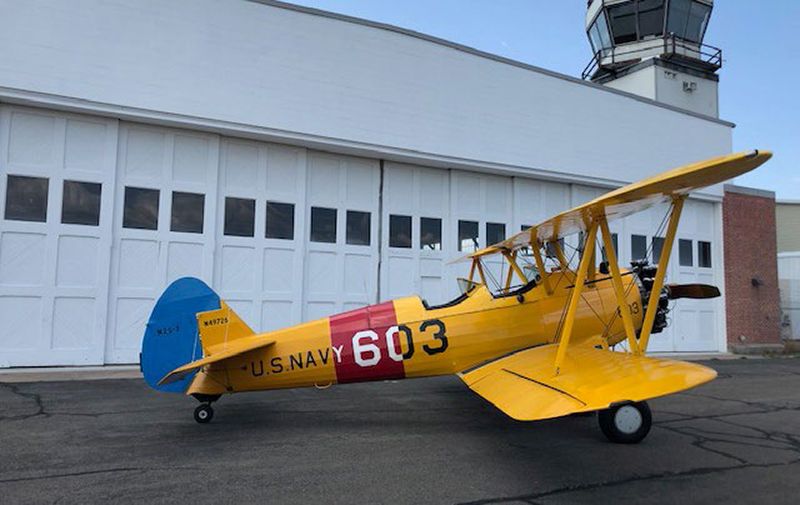 As is the case with all airports, there are always some construction projects going on, or scheduled, at Westfield-Barnes. “We’re in the final stages of reconstructing Runway 15/33,” says Willenborg.  “It was nearly an $8 million project. Also, the Governor’s military task force has provided $4.7 million for the re-hab of the Taxiway Sierra and construction of a large aircraft parking area. That’s set to go to construction next spring. Two years from then, we have about a $12 million taxiway project where we’re widening our parallel taxiway to runway 2/20, which is taxiway Bravo South. The north section is 75 feet wide, with 25-foot shoulders; the south section is currently only 50 feet wide with no paved shoulders. We’re looking to match that up with taxiway Bravo North. That project will be a military, FAA, Mass. DOT, and City of Westfield partnership. So, they’ll be four funding sources on that.”

While there is also a need for additional box hangars, and a waiting list for T-hangars, the Airport has no plans to construct them on its own. “Our method here is to utilize private developers to build hangars,” Willenborg explains. “We definitely have some interested parties here at Westfield, and we try to leverage state funding for some of those development costs, when possible. At times, we work with the Mass. DOT’s Aeronautic Division – they have worked private/public partnerships here in the past. Right now, we’re working with them on trying to get funding assistance for a new aircraft parking apron. Then the developer would open up two sites for two box hangars, 12-14 thousand square feet, apiece.”

At over 1,200 acres, Westfield-Barnes has a very large footprint, with land both inside and outside its current perimeter available for both aeronautical and non-aeronautical development. It also has an Airport Commission and a city administration that are both committed to fostering business opportunities at the Airport, realizing that it is an important economic resource for the area. In fact, a state economic impact study determined that in 2019, Westfield-Barnes was responsible for 2,100 direct and indirect jobs with an economic output of $236 million attributable to the Airport’s operations. “I think that resonates with our community and its leaders,” Willenborg states. “We have an economic engine, not only for the City of Westfield, but for western Massachusetts and the Commonwealth.”

Regarding the Airport’s long-range plans, Willenborg reveals, “We’re in the process of finalizing an Airport Master Plan update and getting that approved by the FAA and Mass. DOT. The previous Master Plan was done in 2004 and was updated over the last two years. The new plan really focuses on improving infrastructure out on the airfield, as well as hangar development to generate new revenues at the Airport. We also have some properties we’re looking to put out RFPs for non-aeronautical use. For example, it could be a storage facility and we have some large tracts that we’re looking into possibilities for a solar farm.”

Is another scheduled commercial carrier in Westfield-Barnes’ future?  “We fall within the catchment area of Bradley and Bradley is not at max capacity, but it’s just difficult for us to compete in that type of market,” Willenborg replies. “However, as the industry changes over time, it’s something we can look at. We designed certain parking aprons, and where our terminal building is, to handle 737s, so if the need arises in the future, we could transition to that type of service. But to make that type of investment, especially with the uncertainty with the airlines, right now, it’s not in the cards at this point. But long-term, if things bounce back and if Bradley meets a certain capacity, it might be something to look towards.”

That being said, Willenborg notes that looking towards the future in terms of workforce development in the aviation industry is definitely on the Airport’s agenda. “We’re very fortunate in that we have one of maybe three or four high school programs that are FAA-approved,” he exclaims. “These students at Westfield Technical Academy meet the FAA requirements to get an A&P license. By the time they graduate, and if they pass the FAA testing, they will have their airplane license. They have over 60 kids in the program, and we just had a graduation ceremony.”

The Airport also works with the Western Massachusetts Wright Flight Program, whose mission is to educate students from grades seven through high school level in the history of aviation, its future, the significance of aviation in the development of technology, its global impact, and the many careers in the aviation industry. The program emphasizes the importance of setting goals, developing plans to attain those goals, and understanding the need to develop skills in Science, Technology, Engineering, and Math (STEM). The program also seeks to recruit and integrate students of diversity into the aviation industry. “That’s an after-school program,” says Willenborg. “Kids go for 13 weeks and if they pass the test and meet all the requirements, they actually get to fly an airplane with a certified flight instructor. They get their first log book and their first hour of flight time. We do about 100 students a year here at the Airport.”