The best in customer service

The Wichita Falls Regional Airport is a public and military use airport located approximately six miles north of the central business district of Wichita Falls in Wichita County, Texas. The Airport’s runways and taxiways are shared with Sheppard Air Force Base, whose host unit, the 80th Training Wing, is the largest and most diversified training Wing, within the U.S. Air Force’s Air Education and Training Command, specializing in technical and field officer training. The base is also home to ENJJPT, the Euro-NATO Joint Jet Pilot Training program, the world’s only multi-nationally manned and managed flying training program chartered to produce combat pilots for NATO, from 13 countries. 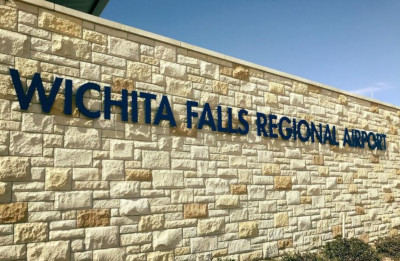 The Airport also provides a commercial link to the Dallas/Ft. Worth Airport, with three American Airlines (Envoy) flights, daily. “Right now, I also have three airlines that offer casino charters,” adds Airport Administrator, Jon Waltjen, who also manages the nearby Kickapoo Downtown Airport for the City of Wichita Falls, which houses approximately 80 aircraft, including small jets and helicopters. “One of the Airlines is Sun Country, which has a contract with Riverside Hotels in Laughlin, Nevada. I have another Elite Airways – they also fly into Laughlin, for the Caesar and Harrah Hotels. Swift Air flies the Wendover route, which is up in northern Nevada. I average one or two of those flights every month.”

About three years ago, Waltjen says that his staff of two full-time and three part-time employees, plus two linemen from Kickapoo, took over the ground handling operations for the casino charter flights after American Airlines, which had previously done the work, decided not to continue with its contract. “Once that happened, a proposal was presented to the City Council and the City Manager to purchase all the ground equipment – the tugs, the baggage carts, and other equipment – to support these charter flights, because a lot of people fly on these aircraft all the time, and if we were to shut it down, we would have lost 2,000 to 2,500 enplanements per year. So, we do the ground handling, now, from checking the passengers in at the counter and processing them. We also provide the baggage handling and, if it’s requested, we’ll clean the aircraft.”

Wichita Falls Regional also has four box hangars for corporate aircraft and several T-hangars for smaller GA planes. Finally, the Airport serves as a diversion airport for over a dozen airlines. “If there’s bad weather and they can’t get into Dallas/Ft. Worth, they’ll come here,” Waltjen explains. “We’ll fuel them, and they’ll stand by, and then, once they get clearance, they’ll go on to DFW. I average about 15-30 of those diversions every year.”

In 2014, the Airport built a brand new terminal, replacing the original structure, which was constructed in 1959. “It was a $32 million project,” says Waltjen. “We went from a 19,000-sq.-ft. terminal to a 65,000-sq.-ft. terminal.” The new facility includes two passenger gates and a passenger area equipped for military personnel and their families. It also has new jet bridges that help protect passengers from bad weather. “They used to have to go out in the elements and go up manual stairs to get on the aircraft,” Waltjen notes. “Now, with the jet bridges, they’re out of the elements when they’re boarding and deplaning.”

Other recent upgrades include work on the Airport’s parking lot, ramp, taxiway, and runway. “We’re in the process of redoing our service road,” Waltjen adds. “We’re also in the process of redoing our GA apron. A lot of the concrete here is over 50 years old and a lot of the sub-base is failing, so we’re redoing it to last us another 50 years. We’re also looking at putting in an MRO – a maintenance repair facility for commercial aircraft – because we’re situated at the halfway point between Oklahoma City and Dallas/Ft. Worth, and there’s no maintenance in between for these aircraft. We’re looking at between five and ten years to put up a maintenance hangar to support and maintain commercial aircraft.”

Meanwhile, Waltjen says that the Airport will continue the City of Wichita’s policy to provide the best customer service possible. “We are 100 percent customer service-based,” he asserts. “We are hands on, we get involved, and we have a very good relationship with all our tenants. We’re always trying to make it better and provide a better product and better services to our passengers and our customers.”

Check out this handpicked feature on St. Louis Downtown Airport – A premier option.

WHO: The Wichita Falls Regional Airport

WHAT: A public and military use airport