According to Airport Manager, Tye Ramsay, the Airport was originally built as a mail carrier route. In 1936, the federal government’s WPA (Works Progress Administration), a New Deal Agency, partially funded the construction of a new hangar on the airfield, while the County called for local men to donate their labor towards the completion of the structure. The hangar is a tribute to the early days of air travel in the United States. In the mid-1930’s remote places such as Garfield County began to realize the benefits that could be derived from air services. Simultaneously, the U.S. government realized that a network of airport facilities was a necessity. Thus, the WPA and Garfield Country worked together to further both local and national concerns.

In the realm of airplane hangar construction and design, the Bryce County Airport hangar is truly an oddity. The logs used in its construction were cut as part of the Civilian Conservation Corps (another New Deal agency) project to eradicate the black beetle in Southern Utah. Infested ponderosa pine trees were felled and sawed at the East Fork Sevier River sawmill and the logs were then hauled by teams of horses to the construction site. Having no previous experience in designing or building an airplane hangar, the ranchers and farmers built in the style they knew, which turned out to be a large, log, barnlike edifice. Still standing today, the soundness of the building bears witness to the excellence of craftsmanship and ingenuity of design. The distinctive hangar is part of the reason the Bryce Canyon Airport found its way onto the National Register of Historic Places in 1978.

Garfield County employs a staff of two to operate the Airport, and also supplies some of its operating funds, although Ramsay, who took over the reins about three years ago, says that it is close to “working in the black. It’s one step at a time.” Currently, the Airport is shut down, as it is in the midst of a full runway reconstruction project. Ramsay admits that the timing for the project was fortuitous as the COVID-19 pandemic has halted much of the Airport’s regular business, anyway. He expects the project to be completed by the middle or end of September.

Going forward, Ramsay says he would like to see more development take place at the Airport, including more privately-developed hangars, as well as both aviation and non-aviation businesses setting up shop. To that end, he is working with the State of Utah, which owns a lot of property outside the airfield’s perimeter, as well as a little inside of it. “We’re working with the State Aeronautical Division and our Economic Development Department within the County to get the land into the County’s hands, so we can develop it. We’re looking at all the options, trying to build up the Airport.”
Ramsay would also like to see the introduction of scheduled commercial service. “In 2007, we had a company out of Las Vegas that was bringing in five to seven Twin Otters a day,” he recounts. “They sold out to a larger company and stopped service. We are continually looking for someone to fill that void.”

When originally built, the aim for the Airport was to attract tourists to Bryce Canyon National Park, which is only five miles away, as well as other natural wonders in the area, including Zion National Park, which is an hour-and-a-half away by car. With luck, by the time the runway project is complete, the COVID-19 pandemic will have subsided substantially enough to see a resurgence of air traffic to the historic Bryce Canyon Airport located on the periphery of some of America’s most sensational scenic attractions. 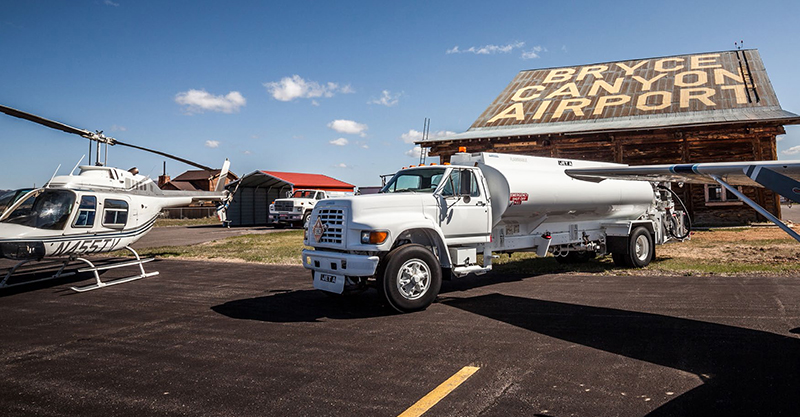