Oscoda–Wurtsmith Airport is a public use airport located on the western shore of Lake Huron, three miles northwest of the central business district of Oscoda, an unincorporated community in Iosco County, Michigan. The Airport covers an area of approximately 2,000 acres, at an elevation of 634 feet above sea level. It has one asphalt paved runway, designated 7/25, which measures 11,800 by 200 feet.

Oscoda-Wurtsmith got its start in 1923 as Loud-Reames Aviation Field, a soft-surface landing site for Army Air Corps aircraft being deployed from Selfridge Field, near Detroit. It was renamed Camp Skeel in 1924, for World War I pilot Captain Burt E. Skeel. Training operations at Camp Skeel included utilizing nearby forested areas as bombing and strafing ranges. It was also a base of training for winter maneuvers, from 1924 through 1944, by the 1st Pursuit Group at Selfridge Army Air Base. During those winter maneuvers, the army pilots and mechanics battled snow squalls and bitter cold temperatures as practice for winter warfare operating techniques, which included getting cold aircraft engines started. Oil was heated in drums over open fires of pitch pine and then poured into the engines. Crews then worked fast to get the engines running before the oil congealed. In addition to maintaining the aircraft under those extreme weather conditions, pilots practiced landing on a snow and ice-covered lake using aircraft equipped with skis. 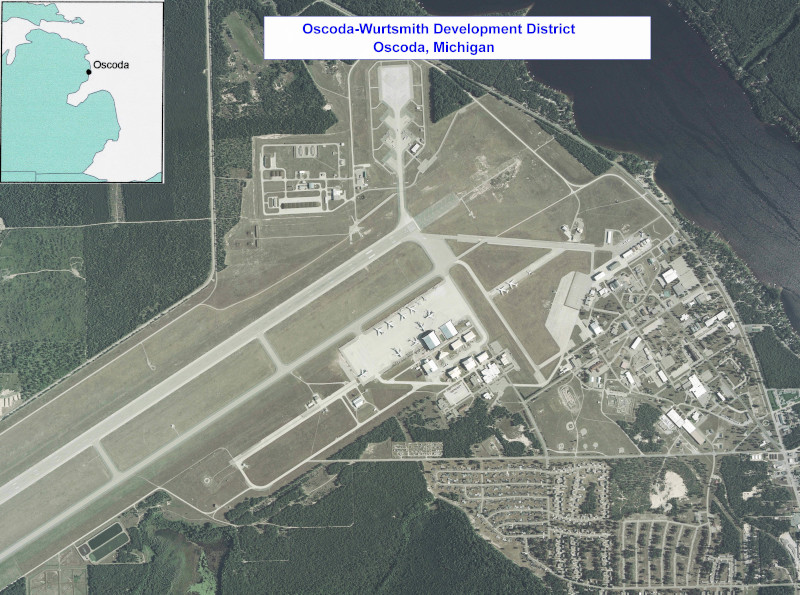 In 1942, the airfield, with three 5000’ X 150’ hard surface, concrete runways, was renamed Oscoda Army Air Field under the jurisdiction of the Third Fighter Command and the 100th Base HQ and Air Base Squadron. It operated as an auxiliary airfield of the Selfridge Army Air Base. The missions included defense of shipping lanes at Sault Sainte Marie and the Straits of Mackinac. It was also used to train both Afro-American aviators, as well as pilots of the Free French Air Force.

The base was renamed Wurtsmith Air Force Base in 1953 after Michigan native, Major General Paul Wurtsmith, who was killed when his aircraft crashed near Cold Mountain, North Carolina in September 1946. Wurtsmith AFB was considered a vital Air Defense Command base.  It was equipped and manned with interceptor aircraft which were ready for 24/7 response to unknown aircraft flying over the North Pole from the Soviet Union. In 1960, the jurisdiction of Wurtsmith AFB was transferred from the Air Defense Command to the Strategic Air Command (SAC). As a SAC base, Wurtsmith became home to nuclear weapon-capable B-52 bombers and KC-135 Strato-tankers that provided airborne refueling.

The 1991 Base Realignment and Closure (BRAC) process determined that new long-range satellite surveillance systems and weapon capabilities rendered many military installations unnecessary.  As a result, Wurtsmith A.F.B. was deactivated and closed as of June 30, 1993. The airfield, aircraft maintenance facilities, and industrial properties were transferred to Oscoda Wurtsmith Airport Authority. The Airport Authority includes representation and partnership among five local municipalities which include Alcona County, Iosco County, Charter Township of AuSable, Charter Township of Oscoda, and Greenbush Township.

Over the past 27 years, since the base closure, the Airport Authority has been responsible for repurposing and further developing former military facilities in support of civil aircraft operations. Today, the Airport has no scheduled passenger service. Instead, the airfield and large hangar facilities are utilized in support of heavy aircraft maintenance and overhaul services. Its major employer, and operator of former military hangars, is an aircraft maintenance company called Kalitta Air. Kalitta Air maintains both its own fleet of aircraft, as well as third-party aircraft with a workforce of approximately 1,200 employees. Another airport tenant is Phoenix Composite Solutions, which operates an aerospace composites repair and manufacturing facility. Additionally, a division of Phoenix Composite Solutions serves as the Airport’s Fixed Base Operator (FBO) in support of based and transient aircraft fuel delivery and maintenance services. As the onsite hangar keeper, Phoenix Flight Services also provides rental hangar space for the benefit of about 18 home-based aircraft. 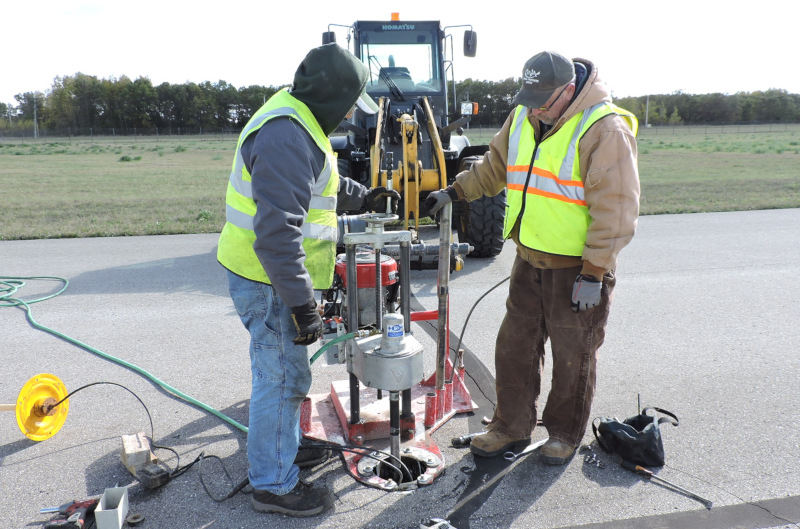 Airport Manager, Gary Kellan, notes that Oscoda-Wurtsmith is one of three former SAC Base airfields located in Michigan. During military operations, all three of those bases were developed with relatively long and wide runway surfaces. During post-base closure, only Oscoda-Wurtsmith Airport continues to justify the need for maintaining the full 11,800 feet long by 200 feet wide runway configuration. That justification is primarily a result of the many large, wide-body aircraft arriving at Oscoda-Wurtsmith for the variety of Maintenance, Repair and Overhaul (MRO) services being provided by Kalitta Air. Kellan also notes, “In comparison to the other former Michigan SAC base airfields, each airport is supporting different types of flight service related activities. In other words, the three airports don’t directly compete against each other for business. When, for whatever reason, the flight operations require a longer or wider runway, perhaps Oscoda-Wurtsmith may have a little bit of attractive edge.”

As is the case with every airfield, there are always construction and maintenance projects either being planned, ongoing, or just completed. Since the Wurtsmith base closure, two large aircraft maintenance hangars have been constructed.  Both of those hangars are approximately 80,000 square feet in size, and Kellan says that a third similar structure is being considered. He also notes that during 2018, the runway was completely resurfaced. Therefore, Oscoda-Wurtsmith Airport, “should remain in great shape, in terms of runway surface, for the next 15 – 20 years.” Additionally, the Airport Authority has recently been awarded approximately $5.8 million dollars from the FAA for resurfacing portions of a 54-acre heavy aircraft capable parking apron and another $1.05 million dollars for resurfacing a primary runway connecting taxiway. Both of those projects are being implemented during 2020.

When asked about the typical challenges of maintaining Oscoda-Wurtsmith Airport, Kellan responds by explaining that the Airport Authority does not receive funding from the municipalities that make up the Airport Authority. Therefore, Airport Authority operations are primarily funded from the lease revenue collected from tenants renting former Air Force buildings and properties. The resulting limited cash reserves are then utilized as local matching funds when competing for grant funding from the FAA, the Michigan Department of Aeronautics, and other sources. In short, the ongoing challenge for Oscoda-Wurtsmith Airport Authority involves having to compete and rely upon discretionary awards of grant funding in order to maintain its extensive inventory of pavements, buildings, and infrastructure.

When asked about comparable base reuse success, Kellan states that, “Admittedly there are former military facilities redeveloping faster and to a greater extent than Oscoda-Wurtsmith. But those faster redeveloping facilities are typically located near cities, or extensively developed urban areas and high capacity transportation routes. In terms of comparing Oscoda-Wurtsmith Airport with former military bases located within relatively rural/low population areas, Oscoda-Wurtsmith Airport has been relatively successful in repurposing and growing business operations.”