Business View Magazine interviews Greg Phillips, Director of Aviation, Colorado Springs Airport, as part of our series on best practices of regional airports in the U.S.

The Colorado Springs Airport is a city-owned, civil/military airport, six miles southeast of Colorado Springs, in El Paso County, Colorado. The facility first opened in 1927, on two gravel runways; in the late 1930s, its first scheduled airline flight went from El Paso, Texas, through Pueblo, Colorado Springs, to Denver, and back.

The Airport’s first municipal terminal was built in 1942 – the same year the airfield was taken over by the War Services Administration to train pilots to fly P-38s and other military aircraft. When World War II ended, the Airport reverted back to the City of Colorado Springs control, except for the north end of the property, which became Peterson Air Force Base in 1948.

After sharing facilities with the military for a quarter century, the City of Colorado Springs built a new terminal in 1966, which was further expanded several times over the next two decades. In 1991, the voters of Colorado Springs approved a bond issue for the construction of brand new terminal to replace the crowded, outdated one. More than 50,000 citizens turned out for the 1994 grand opening of the Airport’s existing three-level, 280,000-square-foot structure, which came in at a cost $140 million.

The Colorado Springs Airport has three, 150-foot wide runways, with one at 13,501 feet long, making it one of the longest in the state. As a city-owned “enterprise fund,” it receives no appropriations from it. “We live and die on the revenues we make,” says Director of Aviation, Greg Phillips. “We’re always looking at ways we can increase our revenue, because the money we spend to operate and improve the Airport comes from the revenue we make. We don’t take a dime in general fund taxes.”

While the Airport has several different revenue streams – corporate and general aviation; the Peterson Air Force Base, which is its largest tenant; and a 900-acre non-aeronautical business park – Colorado Springs is mostly known for its commercial service. Carriers serving the Airport over the years included such long-forgotten names as Wyoming Air Express Service, Pikes Peak Air Service, and Western Air Service. Today, the Airport is served by American, Delta, United Airlines, and Frontier.

“Our commercial service continues to grow,” Phillips says. “In the last three years, we’re up over 40 percent, and we’re still looking at additional growth for this year, as well. So, we’re pleased about that, because we worked hard on our air service efforts to make sure our current routes are sustainable and that we’re making a strong business case for additional routes. Our commercial load factor, just in the month of May, which is our latest confirmed data, was 87.9 percent. So we’re definitely filling airplanes out of Colorado Springs.”

“Our traffic with Frontier has waxed and waned,” Phillips adds. “Last year, they brought in seven different seasonal flights, and they took them out at the end of August, so the season ended early. This year, they brought four of those flights back and they’re doing very well and they are scheduled through the middle of November. So, what we saw in the first several months of this year, was that our numbers, year over year, were down; year over two years, they were about the same, or up. What we’re seeing now, as we get to summer, the numbers continue to go up, the flights are doing well, and we’re showing that by late July/August, we’ll actually have more seats in our market than we’ve had in ten years. So, by the end of the year, we expect to be up.”

“Colorado Springs is not a small piece of property,” Phillips adds. “We have 7,200 acres, total, and three runways. We’ve got the fifth longest commercial service runway in the country, which means that almost anything can land here. And the fact that we’ve got 7,200 acres means that almost anybody can develop here. So, we have an awful lot of space that we can continue to develop for aeronautical purposes, and for non-aeronautical purposes.”

Some of that space has recently been absorbed by the Peterson Air Force Base. “We’ve just completed a 276-acre expansion of the Peterson Air Force Base lease, which allows them to look at new land for development and to shuffle some parcels around that will help them,” Phillips notes. “One of the really exciting things is the discussion about the Space Force and having named General Raymond, who is the Commander of the Air Force Space Command and additionally, the U.S. Commander of Space Force. So, as the country looks at locations for its headquarters, Colorado Springs is certainly at the top of that discussion. And if it happens here, that will, undoubtedly lead to expansion on Peterson Air Force Base, and, possibly, other bases and facilities around Colorado Springs. There’s a strong argument for Space Force being here with NORAD (North American Air Defense Command), NORTHCOM, the Air Force Academy, and Schriever Air Force Base that controls most space satellite systems around the country, here already. So that’s exciting.”

Several other Airport tenants are expanding, as well. “Sierra Nevada Corporation just got a certificate of occupancy for another 60,000-sq.-ft. hangar,” says Phillips. “They’ve built almost 150,000 square feet of hangar space in the last three years and we’re having discussions about future plans. To put it in perspective: a 60,000-sq.-ft. hangar can house four C130 Air Force aircraft all at the same time and still be able to close the doors. They’ll have over 200 employees at the Airport, now. So, that’s great growth there. And the World War II Aviation Museum is well into construction of a 40,000-sq.-ft. hangar that will allow them to expand their mission. And they’ve got another 40,000-sq.-ft. hangar that they will start shortly after this one’s done. So it’s exciting to see what aircraft they’ll be able to bring up here to put in the museum.” 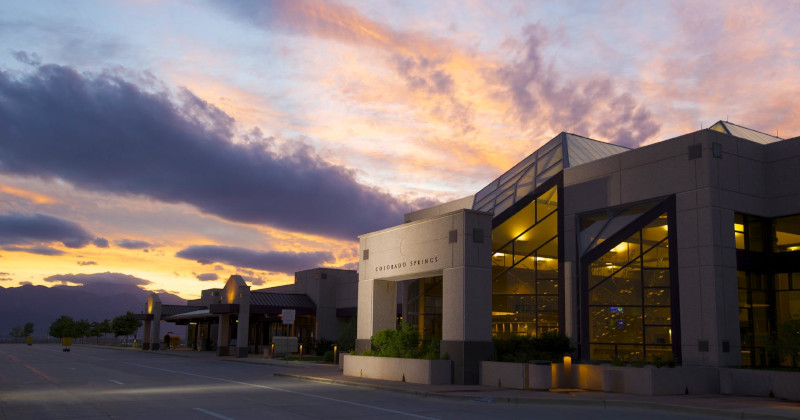 The Airport’s terminal is also in the final stages of refurbishment after a fire gutted part of the building, last April. “We ended up with an insurance settlement of $8.8 million and have redone, entirely, the third floor administrative offices and the second floor public side,” Phillips reports. “While painful, and on top of every other thing we were trying to do, the silver lining is that we have done some upgrades that have received nice comments from the public about how we’ve remodeled it in 2019 style instead of 1994 style, when it was built. We have a bit more work to do on the first floor, but we’re getting through that.”

Going forward, Phillips says that Colorado Springs could have some new tenants, soon, as well. “We’re hoping to have an Airframe and Power Plant (A&P) mechanic and trade school at the Airport,” he says. “Spartan Technical College submitted for FAA review and potential approval, and we’re hoping, by this fall, to have students in the program. Another thing we’re hoping to have under contract, very soon, is a hotel on Airport property. We think that’s a great use; it certainly helps the community outside of Colorado Springs. If you’re coming up from northern New Mexico, or western Kansas, or Oklahoma, or Trinidad, Colorado, you can spend the night before your early morning flight and not have to do that drive at three in the morning.”

Growth is also taking place at the Airport’s business park. Phillips explains, “The real exciting news is that Amazon is constructing a building, now, that it hopes to have opened by September – a 67,000-sq.-ft., last-mile, distribution center – in the Airport business park. There was an awful lot of innovative work to make that happen, because a consortium of partners – the Airport, the utility company, and Amazon and its partners – put about $8.4 million in infrastructure – wet and dry utilities, water, sewer, gas, electric, etc. – to be able to build that facility, and to continue to open up the business park and make it easier for developers for additional construction and development.

“To make that work, we established a ‘metro district,’ in the business park. I’ve never heard of another airport doing that. It allows the members of the metro district to vote a mill levy that will allow repayment of the money over time. So, the Airport put money into it, and it will get its money back over time through the mill levy. For us, that was an absolutely genius arrangement that helps us make the investment and helps the tenants get into the property.

“Having the first domino – the Amazon facility – fall in the business park, we’re already seeing pretty intense interest in additional sites there. That’s exciting because, since 2006, when they first established the business park, nothing happened for years and years, and now, with some of this latest work, it’s starting to go gangbusters. We’re talking to gas stations, convenience stores, a fast-food chain; so the dominoes are falling quickly.”

Phillips explains that the Airport has a very aggressive incentive program in place to help entice more businesses to come to Colorado Springs: “We have an enterprise zone and a foreign trade zone. We also have what we call a commercial aeronautical zone, a CAZ. The purpose of these incentive programs is to reduce or eliminate taxes. The commercial aeronautical zone is probably our most aggressive form, and for aviation-related businesses, we can eliminate significant portions of the taxes they pay on construction, aeronautical-related tools, equipment, and parts that they buy. So, we can reduce the burden, pretty significantly, on a business that is interested in Colorado Springs.”

And that portfolio of incentives just got bigger with the addition of the new federal Opportunity Zones program. “The Opportunity Zone provides a great opportunity for businesses to forego capital gains and forego some tax costs,” Phillips says. “And the entire Colorado Springs Airport was identified as an Opportunity Zone. So, the incentives – our commercial aeronautical zone, enterprise zone, and foreign trade zone – now, here’s another one. Our duffle bag of incentives and options just grows larger.”

Finally, Phillips says that the Airport has endeavored to increase its visibility in the aviation world. “We have, over the next few years, three different conferences coming to Colorado Springs,” he announces. “Next year is the American Association of Airport Executives. They have an annual conference called the Industrial Aviation and Military Operations conference. They were in San Antonio last year, and they’re going to be in Colorado Springs, next March. That will bring people that are involved in airports that have a mix of military and civil aviation, from across the country. In 2021, we worked with the state’s aviation department to help bring the National Association of State Aviation Officials to Colorado Springs – that’s the state aeronautics directors from all 50 states and associated staff, for the first time in their 87-year history, to Colorado. Then, we’re doing a smaller statewide conference that brings all the airport operators from Colorado to Colorado Springs in 2022. I think it’s important to make sure that we have a voice in aviation issues; that we have an opportunity to be involved in discussions in those issues; and that we have people from around the country see what aviation is in Colorado Springs.”

To top off this past year’s flurry of growth and expansion, Phillips states that the Colorado Springs Airport was just named the 2019 Airport of the Year by the Colorado Department of Transportation. “It has been a busy year,” he acknowledges. “And our staff has worked hard this last year, so it’s really nice to see the Airport receive recognition, statewide, for their accomplishments and hard work.”

WHO: The Colorado Springs Airport

WHAT: A city-owned, civil-military airport