The Las Cruces International Airport is a city-owned, general aviation and military airport located nine miles west of the central business district of the City of Las Cruces, in Doña Ana County, New Mexico. The 2,193-acre facility has three runways: 4/22 is 7,501 by 106 feet, asphalt; 8/26 is 6,069 by 100 feet, asphalt; and 12/30 is 7,506 by 100 feet, concrete. Currently, there is no scheduled commercial service at the Airport, although it has been served by many different airlines from the late 1940s until 2005. They included: Pioneer Air Lines, Continental Airlines, Frontier Airlines, Bison Airlines, Aztec Airlines, Zia Airlines, JetAire, Mesa Airlines, and Westward Airways.

According to Airport Administrator, Andy Hume, Las Cruces has been the scene of several significant projects over the past year, including a lighting upgrade to its two longer taxiways. “So, now, they are fully LED,” he notes. “And we’re looking at expanding that across the airfield and upgrading all of our incandescent to LED to save energy; they’re longer lasting and provide better light, overall. And we’re looking at that for our runway lights, as well as our signs. And, we just got done doing some significant upgrades to our roads on the land side; they were in pretty bad shape.”

Another major project is a redesign of the Airport’s main, general aviation apron. “It’s been neglected for a while, so we’re going to have a significant investment in completely reconstructing that,” Hume remarks. “That project is going to total about $3 million. There will be a brand new surface, new tie downs, with new opportunities for some of the larger planes to come in and park. The apron had been designed and the project has been awarded, and we hope to put a shovel in the ground around the first of the year. So that’s going to be a really big project.  And it’s going to be a game-changer for us, for sure.”

“Also, right now, we are in the midst of a significant upgrade to our security gates and our security system,” Hume continues. “Because our gate operators are very old, we can’t get the parts for them anymore, so we will have a fully-integrated security system with the gates tied back to our main terminal, so we can keep an eye on who’s coming and going. In addition, we received a grant from the FAA’s supplemental funding process for 2019 and we are going to be replacing our security perimeter fence. Right now, it’s a four-strand, barbed-wire fence that allows deer and cows and coyotes and all sorts of animals to freely come and go across the airfield – and people as well – and so, we’re going to be putting up a brand new perimeter fence, which will also improve our security and safety.”

“We’ve also been doing a lot of rehabilitation on taxiways and taxi lanes and we have more in the pipeline for the next two to three years,” he adds. “The next thing that we’re going to be working on is an extension of one of our runways; we’re looking at extending runway 8/26. It’s currently 6,000 feet and, ultimately, we want to extend it to 8,500 feet. Because we’re at such a high altitude, here, we need a longer runway to support larger aircraft. For instance, the New Mexico State football team can land here in a 737-800 and disembark, but because our runway is not long enough, they’re not able to take off here. They actually have to be bused to El Paso in order to go to away games. So, overall, to accommodate larger aircraft, we have to extend the runway.” 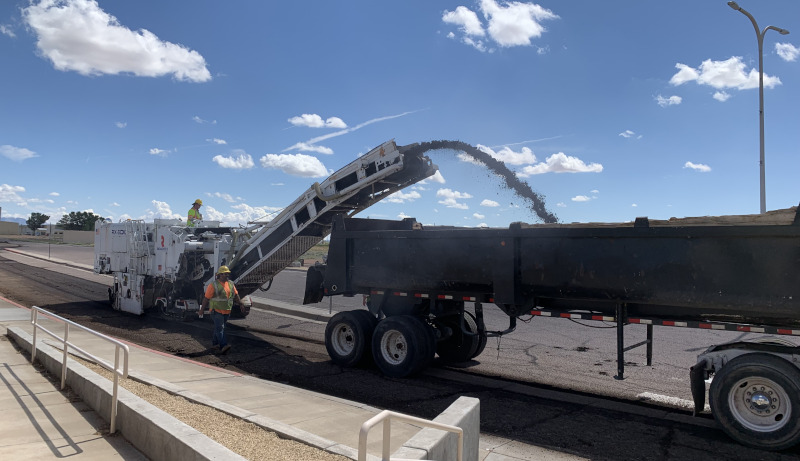 Hume reports that the Airport is also engaged in a few different studies targeting several specific needs, going forward. “We’re finishing up Phase 3 of a very in-depth survey of the entire Airport, including all of our leased parcels, all of the areas that we want to lease, all the utilities, etc. It’s a joint program between the city and our airport consultant, Molzen-Corbin, and we have five phases planned.”

“We’ve kicked off two other studies,” Hume says. “One is looking at the feasibility for passenger air service. We haven’t had air service here for 15 years; we don’t have charter service, either. So, we’re looking at all of those different options.” That study will look at things like the volume of local passengers not currently being served, charter flights, corporate travel, the need for a regional airline to connect to larger carriers, and the convenience of having TSA security and bag-check service in a smaller airport like Las Cruces.

“The second study is in conjunction with the adjoining industrial park,” Hume adds. “We’re looking at what our target industries ought to be and what we should be making our investments in. Three targets that have been identified in the preliminary report are: aerospace, aviation and defense; value-added agriculture; and advanced manufacturing. Those two studies are going to be important in terms of looking ahead and how we should take our limited resources to try to attract industries to come to our area, and also help those that want to grow, locally, that will mesh well with those targets.”

Finally, a third study is underway that is focused on the Airport’s administrative space needs. “We’re looking at a space assessment based on our existing square footage and what our goals are for the future. I have a pretty tiny office,” Hume opines, “and we don’t really have a good conference space, so that space analysis is really important for us.”

Meanwhile, the Airport has welcomed a few new businesses over the past year. They include an aerospace startup called Immortal Data, a new company that helps retiring military fixed-wing pilots get retrained to operate helicopters, and a small helicopter assembly facility called Helicycle that relocated to Las Cruces from Idaho. “It’s a small operation, but they plan on growing and it’s perfect for us because we’re a small airport and we plan on growing, too,” says Hume. “And that’s one of the great things about those three companies. Even though our Airport has been here for many decades, we’re still small and we’re still a tight-knit community. So, we have these startups coming in and they’re in a position to grow along with us and that is really exciting for us. And, we do have a restaurant interested in coming into the Airport. That remains a very big interest of ours – getting a restaurant here.”

Hume adds that the most exciting thing on his agenda is the Airport’s growing relationship with Virgin Galactic, the spaceflight company that is developing commercial spacecraft with the aim of providing suborbital space flights to space tourists, as well as suborbital launches for space science missions. “Their world headquarters is now located in Las Cruces, New Mexico and we’ve developed some great relationships with their leadership,” Hume states. “Having a company with the cachet of Virgin Galactic here in our own backyard is a huge positive for us.”

WHAT: A city-owned, public airport