Hector International Airport is a civil-military, public airport located in north Fargo, in Cass County, North Dakota. The Airport’s history dates back to 1927, when Martin Hector, a local banker, leased a quarter section of land for dollar a year. In 1931, he gifted the land to the City of Fargo with the stipulation that his name would always be associated with the facility. Thus, the Airport was originally called Hector Field. In February of that same year, Northwest Airlines, which was founded at what now is the Minneapolis-St. Paul International Airport, began its first passenger service to Fargo.

Today, Hector International Airport covers approximate 4,000 acres and has three runways: 18/36, at 9,001 X 150 feet, is the longest public runway in North Dakota; 9/27 is 6,302 X 100 feet; and 13/31 is 3,801 X 75 feet. The Airport is managed by the Municipal Airport Authority, which was established by the City of Fargo in 1969. Its five-member, volunteer board is appointed by the Mayor for renewable, five-year terms. It employs 26 full-time workers plus several part-timers in building operations and seasonal snow removal.

Shawn A. Dobberstein has been Hector International Airport’s Executive Director since 1997, when he replaced Joe Parmer, who had been Airport Director for the previous 50 years. He reports that the Airport is 100 percent self-sufficient for its day-to-day operations, subsisting on revenues derived from the parking lot, car rentals, landing fees, terminal rents, and a percentage of the gross revenues from field businesses, such as its FBOs, the gift shop, etc.

“We do collect some tax money from the City of Fargo,” Dobberstein adds. “State statute allows airport authorities to collect up to four mills within their taxing jurisdiction. We’re only collecting two mills, just under $900,000 per year, which is directed to a construction fund. We use those dollars to match federal grants; if it’s a 90 percent federal project, it comes down to five percent state and five percent local. We can only use city-generated revenue to purchase items eligible under the Airport Improvement Program or the Passenger Facility Charge Program, such as snow removal or aircraft rescue or firefighting equipment, as well as marketing.”

Another current revenue generator is a farming operation that takes up about half of the Hector International Airport’s 4,000 acre footprint. “We went on a huge buying spree back in 2004-08, and bought a lot of property off the end of our primary runway,” notes Dobberstein. “All of that is farmland. We rent it out to others; they come in and farm it and we generate cash rent off of that – about $300,000 a year. We also have some non-aeronautical businesses in our former passenger terminal, which was constructed in 1953 and closed in 1986 when the current terminal building opened. Our tenants include Dakota Air Parts International, which ships aircraft parts all over the world, and Spectrum Aeromed, which manufactures and distributes hospital beds that go inside all types of different aircraft and helicopters. So, we do have a lot of property that the FAA has identified as being non-aeronautical, revenue generating property and we are going to be looking for a developer to help us develop that property in the coming years so that we can attract more non-aeronautical activity on the airfield.”

Over the past couple of years, Hector International Airport’s cargo operations have been a major source of both traffic and revenue. “We have a large FedEx operation that started here about two years ago, with daily jet service to their hub in Memphis and other locations,” Dobberstein explains. “On Nov. 5, 2018, UPS launched daily cargo jet operation to Fargo with a number of feeders, as well. They’re in a temporary facility, but the goal is to have them in a new facility by the fall of 2020 in our cargo area. Right now, they’re expecting to establish a pretty large sorting facility and maintenance facility in addition to a permanent hangar. Both FedEx and UPS jets haul packages to Fargo that serve the entire state of North Dakota, and west central and northwest Minnesota. So, if you’ve ordered something on Amazon today, and you’re out in Crosby, North Dakota, your package is likely to be included on a jet that lands in Fargo.”

While Hector International Airport has a sizable advantage over its nearest competitors in the cargo department, Dobberstein admits that on the commercial, corporate, and GA sides, things are somewhat different. “We do have some competition about three and a half hours down the road in Minneapolis/St. Paul, and Sioux Falls, South Dakota, is located south of us about three hours, so there are some passengers within our service area, which is about 700,000 in our MSA, that might frequent those airports if they find a better fare. We have approximately 1,500 seats per day for sale on commercial carriers, whereas Minneapolis/St. Paul probably has 55,000-60,000 seats per day available, so our seats tend to sell out really fast. Sioux Falls is very similar to Fargo – they’re probably in the 1,500-1,600 seats per day range. So, we look at them as being competitors on the commercial side and we do look to them as being competitors on the general aviation and corporate aviation side, as well.”

However, according to Jim Sweeney, President of the Fargo Jet Center, the Airport’s main FBO, Hector International Airport does have a counter argument to make. He says that Fargo is a perfect place for international aircraft arriving in the U.S., and then moving on to their final destinations, to stop, clear customs, and refuel. “We’ve marketed ourselves as that point of entry and customs clearance,” he says. “Combining our services and facilities with a 24-hour tower, 24-hour U.S. Customs services, and a 9,000-foot runway differentiates Fargo from all airports in the region. We can handle any type of aircraft that can land at the airport, and with support from the airport’s ground crew keeping the runways clean and clear year-round and the airport rescue and firefighting team, there is no other airport more capable within our three-state region. The relatively low traffic volume is also attractive to transient operators as it makes for a quick turnaround with less time spent being vectored into the airport than you will find at busy airports. We set a record in 2017 – nearly 800 aircraft cleared U.S. Customs in Fargo.” 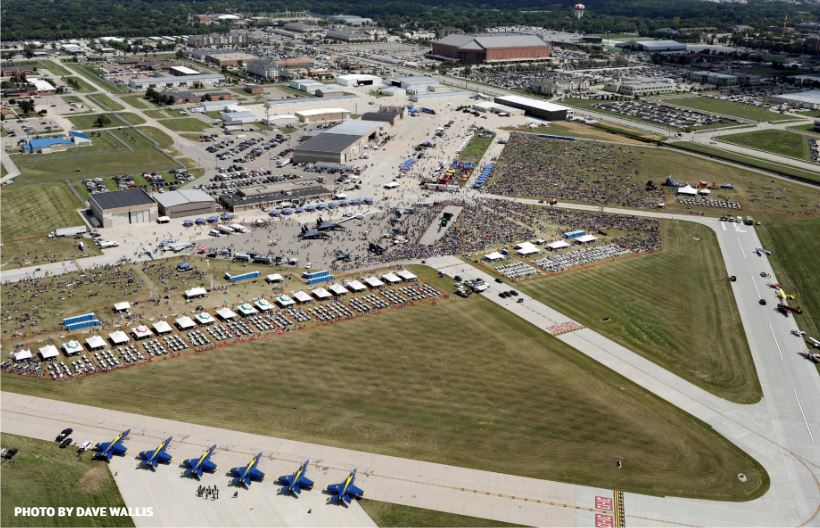 Sweeney’s FBO also has an affiliated company called Weather Modification International that is helping to increase the Airport’s usage. “That company, based at our facilities, is the largest cloud seeding company in the world,” Sweeney states. “And that’s led us into a significant market of specializing in aircraft modifications. We’ve completed a number of aircraft in the past several years, where we’re sending atmosphere research, special mission aircraft out to many foreign governments including China, South Korea, and several others. That modification work is specialized and unique and it’s driving traffic into the Fargo Airport that wouldn’t be there, otherwise.”

All airports have long-term plans, and Hector International Airport is no exception. Going forward, its 20-year plan details expansion of its passenger terminal, as well significant investments in general and corporate aviation facilities. “The military is also investing heavily in infrastructure,” says Dobberstein. “In the spring of 2019, the North Dakota National Guard will commence the facilities for an operational readiness center that will be in excess of $30 million. So there are lots of things happening.”

With all of its civil, business, military, and commercial operations in full swing, there are clearly many reasons to “Fly Fargo.”

Check out this handpicked feature on The Terre Haute Regional Airport – Airport of the year.

TL Stroh is a full-service Architectural and Interior Design firm based in Fargo, North Dakota. Founded in 1990, the firm is committed to fulfilling clients’ needs while developing efficient and innovative design solutions. A 1929 building in Historic Downtown Fargo, renovated by TL Stroh as their office, is a striking example of the company’s signature architectural style – a style visible in outstanding projects they have completed throughout North Dakota, as well as in the states of Minnesota, Oregon, Arizona, Texas, and Montana.

Of course, none of this success would be possible without the TL Stroh people; a wealth of talented, highly-skilled individuals committed to the group effort. Their dedication and passion is what makes the team work, the company work… Founded in 1990 with only three employees, the well-established firm now designs and manages millions of dollars in construction each year. Approximately half of that work is for institutional clients such as cities, counties, state agencies and universities. The remaining is private sector work including corporate facilities, technology facilities, healthcare, religious, restorations, a variety of interior design commissions, and residential projects for discerning individual clients.

Moving forward under the philosophy, “Great Relationships Produce Great Buildings”, TL Stroh has formed a very loyal client base, while also garnering multiple awards of distinction for design and material use. A focus on communication throughout the design and construction process, and attention to construction details, ensures a smooth, on-schedule building process. Working in this atmosphere of open dialogue and mutual respect, the firm creates truly exceptional buildings and unique solutions that exceed client expectations and raise the company’s status as a leader in architecture and design.

From its humble beginnings in 1910, this community bank has been delivering on its mission of helping dreams come true, one customer at a time. Today, four generations strong, the Stenehjem family continues to lead the company with a focus on long-term customer relationships.