Lincoln Airport is a public airport with a significant ongoing and historic military presence located five miles northwest of downtown Lincoln, the state capital, in Lancaster County, Nebraska. The second-largest airport in the Cornhusker State, it is owned by the City of Lincoln and under the “care, custody, and control” of the Lincoln Airport Authority. The Airport began life in the early 1920s, and was the place where Charles Lindbergh learned to fly. During World War II, it was contracted by the United States Army Air Corps for basic flight training and known, then, as the Lincoln Army Air Field. It was transferred back to the City of Lincoln after the war.

Along with its civil use, Lincoln Airport became host to a flying unit of the newly-formed Nebraska Air National Guard along with a Naval Reserve unit flying patrol aircraft. Operating as the Lincoln Air Force Base, the airfield was also home to a Strategic Air Command (SAC) base supporting Boeing B-47 Stratojet bombers, Boeing KC-97 Stratofreighter refueling aircraft, and SM-65 Atlas intercontinental ballistic missiles. In 1966, the U.S. Air Force closed the SAC installation. Today, some former Lincoln Air Force Base hangars, facilities, and infrastructure are leased to numerous businesses and individuals, while part of Lincoln Airport is home to the Nebraska Air National Guard’s 155th Air Refueling Wing, and several Nebraska Army National Guard units. 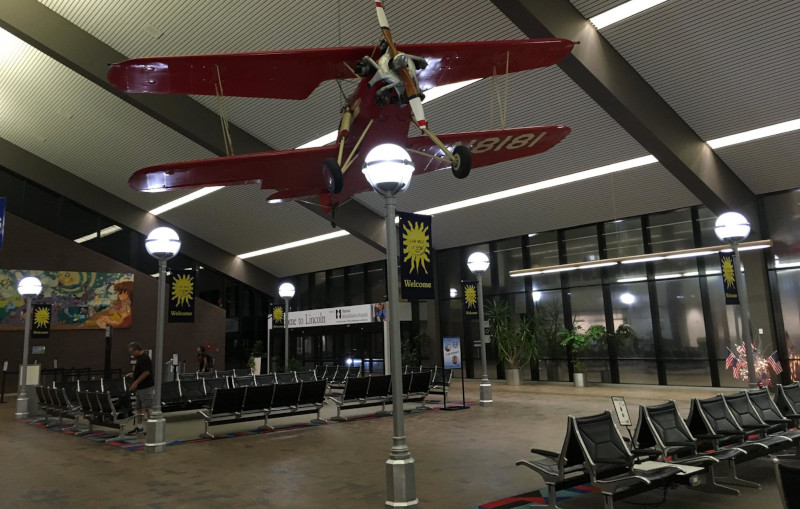 Over the years, the Airport was served by several commercial airlines, including: United, Frontier, America West, TWA, Continental, Northwest, Allegiant, and Delta. Today, only United and Delta remain, with flights to Chicago and Denver, and Atlanta and Minneapolis/St. Paul, respectively. The Airport is also home to many general aviation aircraft. According to Operations Director, Bob McNally, its 160 T-hangars are 95 percent full.

Lincoln Airport covers 5,500 acres, making it one of the 25 largest airports in the U.S. It has three concrete runways, the longest of which is 12,901 feet, once designated as an emergency landing site for the Space Shuttle, but never used as such. Dave Haring, the Airport’s Executive Director, says that the long runway is an asset for the military and, potentially, for service in the international market space. “Having an almost 13,000-foot runway allows for full utilization of passenger, cargo and fuel capacities, meaning that any aircraft can depart Lincoln and travel to most anywhere in the world without having to stop in transit,” he posits.

In the commercial realm, Haring says that Lincoln has some nearby competition. “We lose about 70 percent of our potential market to Omaha,” he notes. “It’s located about 60-70 miles away from us. We lose a very small fraction of our potential market to Kansas City, but that’s a much farther drive – about three-and-a-half hours from here. So, those are really the two primary commercial competitors. Their primary advantage is volume – they’re quite a bit bigger than we are. However, while they have that competitive advantage, I would argue that our size gives us an advantage for people who enjoy flying out of here by virtue of the fact that security lines aren’t as long, parking is a little more reasonable, etc., etc.”

“From a general aviation perspective, that busy airspace activity really kind of hurts them,” McNally adds. “We definitely have an advantage getting in and out of the field. A lot of transient, corporate aircraft will prefer to stop here, rather than sequence in and out of Omaha.”

Lincoln Airport is a self-sufficient operation, with about half of its revenue coming from its tenants on the thousand-acre industrial park on the west side of the airfield, including approximately 400 acres which are accessible to both the Union Pacific and Burlington Northern Railroads. “I’ve been here almost five years now,” Haring recounts, “and the Airport did a lot of growth in the industrial park right as I came – several large, build-to-suit projects. The biggest one was a 173,000-sq.ft. manufacturing facility; about a $15.5 million project. That was a partnership effort among the Airport and the City, economic development, and the Chamber of Commerce. However, one of the side impacts of growth like that is that you take on debt. We took a lot of it on during that growth phase so we are now at a point where we want that growth to stabilize a little bit before we do any more. So, we’re looking at alternatives at how we can continue to see the park develop. One of the development options that we have spent considerable time researching recently is P-3 (Public/Private/Partnership) type arrangements where we’re able to leverage the strength and assets the Authority has, against the knowledge, and in some cases the financial resources, of the private community.  The arrangement would likely include some form of exclusive development agreement that would be publicly solicited and collaboratively selected, and would allow the Airport to revert to more of a traditional landlord role.”

Should the Airport want to raise money on its own, the Lincoln Airport Authority, which is a special subdivision of the state, has the ability to impose a general property tax, should it need to do so. But Haring says that has not occurred since 1985. “If we were to levy the full value of it, today, it would be somewhere in the vicinity of $7-8 million, annually,” he states. “While that dollar value is certainly not inconsequential, both the Authority and the administration have always worked very hard to try to do as much as possible with the resources that we have, while not having to tax the citizens. It’s something that we can’t ever count out, because airports have ever-growing needs, but it’s not something that has been done in quite some time.” Another potential source of revenue, according to Haring, would be selling some of the Airport’s non aeronautical property. “Several parcels of Airport property are significantly disconnected from the Airport’s core.  These parcels do not appear to have an aeronautical purpose, either now or in the future, and would represent likely opportunities for sale,” he adds.

Meanwhile, upgrades to the airfield are ongoing. “We’re in the process, right now, of doing a rehab on our GA runway,” Haring reports. “Significant work was conducted on the primary runway four or five years ago. The GA area, itself, is in dire need of expansion. All four of the current primary service operators have needs for growth and we are out of room. So, we are evaluating either growing in that area, or growing in another area in the Airport.”

“We are also looking at potential terminal modifications from the commercial aviation perspective,” he continues. “We have an interest in both enhancing existing carriers and attracting new carriers, and our efforts to achieve those interests have made significant progress over the last several years. One of the more significant hurdles we have to overcome is the fact that we have a terminal facility that was constructed in 1974 and simply does not meet the needs or expectations of a modern day air traveler. It has a split checkpoint setup, so we’re splitting our TSA teams in two, and that configuration prohibits us from adding sizable capacity in any sort of efficient manner. As one could imagine, fixing all of the antiquation issues can be a daunting, and expensive, endeavor.  We are in the process of evaluating several different options to address those needs and I would expect that a sizeable terminal project will be forthcoming. 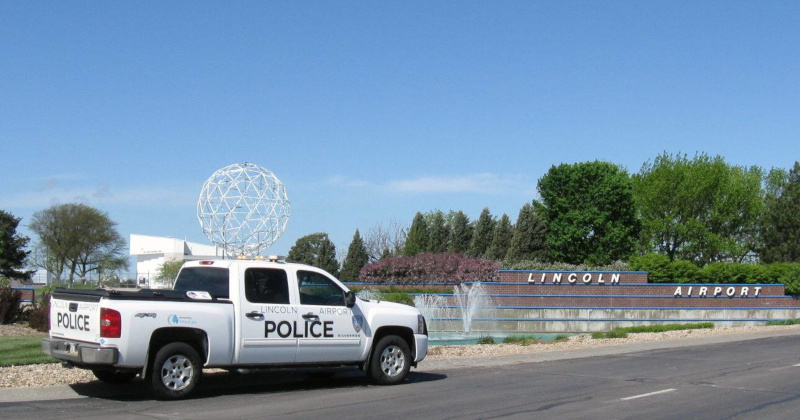 “Offutt Air Force Base will be temporarily relocating from Omaha to Lincoln, as a result of construction activities on the only runway at the Base. During that 12-24 month time frame, the bulk of the flying assets will relocate to Lincoln. As a result of the relocations, there will be sizeable preparatory work taking place this summer, predominantly on our west ramp, but also on some of the adjacent facilities, many of which are former Lincoln Air Force base facilities. The commercial passenger growth, the industrial park efforts, the thriving of the FBOs, and the arrival of Offutt certainly have our focus today, but each year brings an entire array of new and exciting challenges and opportunities.”

All of these ongoing and prospective projects will need to be funded in various ways. “The terminal project will probably be a bonded project due to a lack of sizable fiscal eligibility elsewhere,” Haring explains. “The improvements on the west ramp are being 100-percent funded by the Air Force, as a result of their need for them. The runway projects that we’re working on, or will be working on in the upcoming years, are funded 90 percent through the FAA’s AIP program, and there are some parts of the GA growth that are eligible for federal funding. Industrial park improvements will likely be funded through the entity developing each tract, though there may be opportunities for the Airport to participate in those developments if it makes sense to do so. The Airport has an extensive list of capital needs that are not eligible for any grant resources, including roadways, pavement, parking areas, etc.  Ultimately, our ability to fund any of those projects locally will rely on continuing to identify new sources of revenue and appropriate prioritization of all capital needs.”

Going forward, Haring is particularly bullish on the growth of the GA sector at the Airport. “General aviation in Lincoln is truly thriving,” he states. “It’s unusual to come into an airport and have one FBO experiencing this exponential growth; it’s incredibly unusual to have four. Duncan Aviation is obviously the cornerstone of all of the growth that has taken place over the last 5-8 years in our general aviation sector.  Their globally known reputation of excellence and significant investment in facilities at the Airport continue to position Lincoln at the heart of the General Aviation industry.  However, our FBO/SASO growth is not only limited to Duncan.  Silverhawk Aviation, really the primary, traditional FBO at LNK, has also experienced significant growth as evidenced by their recent construction of a new, 28,000 square feet hangar facility, upscale renovations to their executive terminal, and ongoing fleet acquisitions for their charter division.  In this day and age, where “Pilot Shortage” is a daily story, what has been great to see is the level of growth experienced by our flight school, Performance Aircraft.  Performance Aircraft is in the middle of constructing a new, 12,000 square feet hangar facility that will serve as the primary base of operations for their growing flight school and aircraft sales enterprises.  While not currently in the process of planning or constructing a new facility, Hillaero Modification Center has had several conversations with the Airport about their need to expand the footprint of their aircraft refurbishment operations.  The ongoing success of these four entities provides clear evidence that general aviation is not just strong in Lincoln, it is booming!”