Business View Magazine interviews Terry Connorton of the Spartanburg Downtown Memorial Airport, as part of our series on regional airports.

Spartanburg Downtown Memorial Airport is a public-use facility where almost 60 percent of traffic is business related and approximately 40 percent is recreational flying. It is the largest asset owned by the City of Spartanburg, South Carolina. The general aviation Airport’s users include corporate jets, emergency medical and organ transplant flights, cargo, and military aircraft. In addition, the Airport provides assistance to law enforcement operations, search-and-rescue missions, and wildlife and forestry monitoring. It’s also home to flight schools, the Civil Air Patrol, and the Spartanburg Pilots Association. 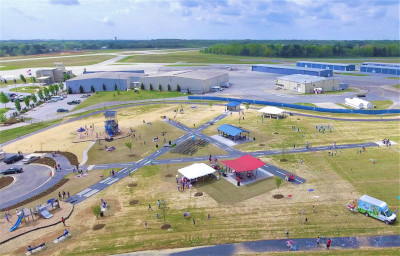 Opened in 1927, Spartanburg Downtown Memorial celebrated the 90th anniversary of its construction, this past May. “The reason the airport was built was, at that particular time after World War I, there were a lot of pilots coming back from the Europe and a lot of aviation was just starting out in the United States,” explains Airport Director, Terry Connorton. “Some visionaries saw the possibility of using airplanes for some type of commercial use. So, a mail route was developed from Washington, D.C., down to Atlanta. On May 1, 1928, at 9:00 P.M., the very first mail plane landed here, which made this the very first commercial airport in South Carolina. That’s one of our claims to fame.”

A grand opening was held that October, an event highlighted by the attendance of Charles Lindbergh, roughly one year after his historic flight across the Atlantic. “The whole town came out to greet him,” Connorton recounts. “He was a world renowned aviator and they wined and dined him. I believe he was on a national tour at that time, flying around to different airports, and that really got the aviation thing going. We had Amelia Earhart here in 1931 when she was visiting the area.”

Spartanburg also serves as a memorial to pilots who perished in World War I, an honor marked by a memorial at the Airport’s entrance, as well as information on another memorial found inside the terminal, which was erected in 1937.

“For about 30 years, or so, we had commercial flights flying out of here. We had Delta, Southern, and Piedmont to name a few,” says Connorton. “In 1962, 1963, an airport opened nearby called Greenville-Spartanburg or GSP, and when it opened, all the commercial aviation traffic went over to that location because it had a bigger runway. So the Airport lost its commercial traffic, but it retained all of its commercial business and flight instruction and similar aviation activities.”

GSP aside, there are similar size airports in Spartanburg Downtown Memorial’s vicinity that provide what Connorton describes as “friendly competition” for his facility. “Our friendly competitors are going to be Downtown Greenville; they have an airport that is about the same size as us, but they do have a lot more traffic over there. And there’s an airport called Donaldson (Field); they have more military (traffic), but they also have a lot of general aviation. In the neighborhood, we have Shelby and Anderson and two other airports that compete with us, because of our size, as far as fuel prices. But it’s a very friendly competition, as far as that’s concerned.”

Connorton assumed his current post last December, following the previous Director’s retirement. He said the City supplies all of the airport’s vendors and employees, which includes himself. “The FBO is part of the city as well, so I run both organizations,” he added. “I run the airport as Director and I manage the FBO, as well.”

Fees, rents and fuel sales are Spartanburg Downtown Memorial’s financial lifeblood and, with the exception of a small printing business, aviation is the focal point of all its tenants.

The terminal received a much needed renovation in 2010 and the Airport is now in the midst of extending its runway, thanks to a $30 million Federal Aviation Administration grant. The project includes resurfacing the existing runway and an upgrade for the Airport’s navigational and lighting systems. FAA financing covers 90 percent of the project costs, with the South Carolina Aeronautics Commission, and the city, each chipping in five percent.

“We’re going to be growing our runway from its existing 5,000 feet to 6,000 feet,” reports Connorton. “We’re about two-thirds of the way through that project and we’re planning to have it done by the end of the year. The runway hasn’t had any maintenance done on it in many, many years. The last time anything was done was back in the ‘80s, so it certainly needed to be done.” 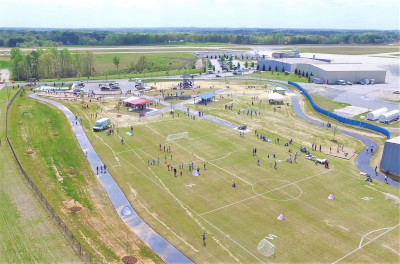 Connorton describes the Airport as “pretty busy,” with about 90 operations a day, but he’d like to see activity pick up. “In fact, when the runway’s completed, we do hope and plan on a lot more traffic coming here because of that, and we plan to do more development to make sure their services are there,” he avers.

“In terms of vacancies, all of our hangars are full. We have about a 40-person waiting list. So we are in the throes of looking at leasing out some of our property to private investors. If they want to go ahead and lease out the property for 25 years, they can build the hangar of their choice on that property. After 25 years, the property would go back to the city and then we’d probably build in some type of renewal process during that time.”

Connorton’s vision for the Airport includes, first and foremost, ensuring that customer service continues to be exemplary, but also to generate additional revenue by selling more fuel. However, his thinking extends beyond just operational matters. “I want to be an outreach for the City of Spartanburg to introduce aviation to young people,” says Connorton, who’s been a pilot since 1989. “I want to really make sure that we provide the facilities here so that it doesn’t just become a rich man’s club – for the wealthy only. I want to make sure that young people can come out here and experience aviation first-hand and to develop lots of different programs to do that.

“Myself, I teach free ground-school on weekends for young children and new students. Tomorrow, for example, I’m going to a local school to talk about aviation with a bunch of young children to see if they’d be interested in it. I really want the Airport to have a lot of good will through the city and provide an interest in aviation in young people. I want to make sure that we’re reaching out not just to people that have airplanes. I want to make sure we’re reaching out to people who don’t, but can see the possibilities. That’s really important to me.”

Check out this handpicked feature on K-Co Enterprises, Inc. – Foundations to Build on.

Founded in 1929, WK Dickson is a multi-disciplined consulting firm specializing in total community infrastructure solutions including airport planning and design, environmental and water resources engineering, land development, energy services, and geospatial technology. Our goal is to help communities improve the lives of its citizens through sound, environmentally responsible design principals.

Arnold Palmer Regional Airport – On a strong and steady course