Back up and running

St. George Regional Airport is a commercial and general aviation airport located just outside St. George, in Washington County, Utah. It is owned by the City of St. George, which is tucked into Utah’s picturesque southwestern corner, not far from the state’s border with Arizona and Nevada, and such natural wonders as Zion National Park, Snow Canyon, and the Arizona Strip. Opened in 2011, the Airport had 54 general aviation hangars when it debuted; two years later that total had grown to 65. Today, there are 100 hangars dotting the 1,200-sq.-ft. facility.

Because the City of St. George is growing at a rapid rate, not surprisingly, the number of commercial flights has also grown dramatically over the past decade. There were just over 68,000 enplanements in 2011; that number reached 140,000 in 2018. Today, there are daily flights between St. George and Dallas/Ft. Worth and Phoenix-Sky Harbor, courtesy of American Eagle; Delta Connection flies to Salt Lake City; and United Express serves Denver and Los Angeles. 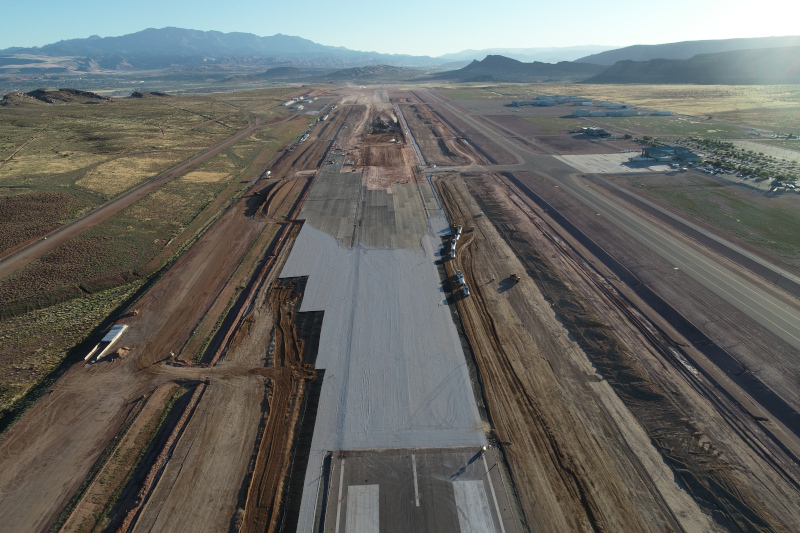 Last year, the Airport’s rapid rise was momentarily interrupted when it closed down completely in order to repair its only runway, which at 9,300 X 150 feet is large enough to handle Boeing 737s and 757s, as well as the U.S. military’s Boeing C-17 Globemasters and KC-135 Stratotankers. “When they built the Airport, we knew there were some problems with blue clay out here,” says Airport Manager, Rich Stehmeier. “They thought they had engineered it correctly, and the FAA signed off on the engineering and the specs.” But over time, the clay caused the runway to ripple. So it needed to be excavated and replaced in order to meet FAA safety specs for smoothness.

“We closed down the Airport for four months and tore out 5,400 feet of runway, and we went 200 feet wide, and 17 feet down,” Stehmeier reports. “We also went two feet down on each side of the runway out to 200 feet on both sides and we regraded the entire safety area.” All the blue clay was removed down to 17 feet and replaced with five feet of a material that’s like the clay plug that’s used in landfills. “It’s optimally moisturized and, basically, water does not go through it. On top of that was engineered fill and, two feet below the surface, they put in a new water barrier, a membrane about 3/8 of an inch thick. We’re hoping that the engineers are correct and that we won’t have to do anything other than maybe an overlay for strengthening of the asphalt for the next 20 years.”

In the four months that the Airport was closed, it put some $20 million directly into the local economy, because, as Stehmeier explains, “the contractor who did it for us is local. The electrician who did all the electrical work after we tore everything up is also right out of St. George. The people who supplied the asphalt – Western Rock – have two plants here in St. George. The engineering firm has a base here. The only other major thing we had on the project was the membrane. That membrane came out of France and the Netherlands to the tune of about $5.5 million.”

“And, in all my years of working in an airport, it was the smoothest, best-run project I have ever worked on,” he adds. “The contractor, JP Excavating Inc., was absolutely amazing. The owner of the company, Judd Palmer, was here on the job, three months out of the four. If there was something that needed to be done, it was done instantly. And by the end of the second month, he was two weeks ahead of schedule. Also, during that four-month period, we had one rainstorm and it dropped just enough to keep the dust down. Normally, we have monsoon season here August through September – didn’t have it this year. So, it was one of those things; the project went off, basically, without a hitch. We were incredibly lucky.”

“While the Airport was closed, we did other projects,” Stehmeier continues. “We moved and recertified our visual landing system; we doubled the parking and we added almost 218 new rental car locations; we fog-sealed and repainted the entire parking area; we expanded our terminal apron for commercial aircraft parking by 110 feet, so that we could get a fifth airplane parked on there, overnight. In addition to that, we replaced all the asphalt and did a bunch of earthwork down at the fuel farm, and we expanded the TSA area in the terminal to get ready for a second TSA line going in.

“That was, hopefully, going to be done in November, but TSA was behind schedule as far as moving the equipment, so that’ll probably be the first of the year before that actually happens. But we went in and did all the pre-work; we tore out the wall, put in a big roll-up door so that now they have access to more of that area; did all the underground work, including tearing up the concrete and putting in new electrical and data conduits and lines, so when the TSA has the equipment ready for us, they can come in and install it. It’s all ready for them – they can plug and play. The inside of the terminal was painted, and we put in an 18 X 7 foot-high, digital display advertising board that’s pretty phenomenal. So, a lot of stuff happened during that time.” 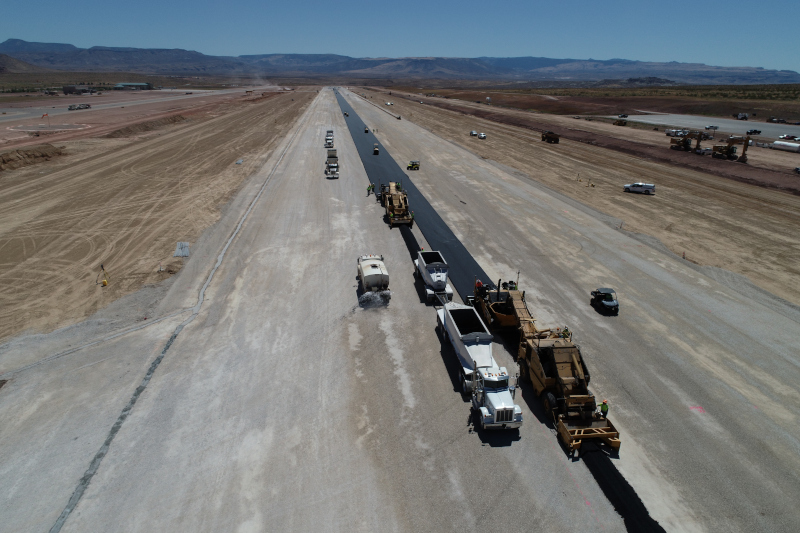 In addition, several businesses saw the shutdown as the perfect time to build new hangars. “We ended up having three completed during that time, two more are under construction, and we have two more that will probably start construction next month,” Stehmeier says. “We had 93 hangars when we shutdown; we have about 100, right now. We had three corporate-type departments come in and build hangars, 120 X 100, or even bigger than that – big hangars for jets.”

Regardless of the good news, conventional wisdom suggests that if an airport is closed down for that length of time, its bottom line will suffer. At St. George, the numbers bear that out: its passenger count went down 14.6 percent – from 140K in 2018 to 116K in 2019. And yet, Stehmeier believes there is a silver lining to be perceived within that statistic. “On that day, the 27th of September, when we reopened, we also started a brand new air service route – direct flights to Dallas/Ft. Worth on American. That was our fifth direct destination out of St. George. And on our first month of that, we were at 82-84 percent seat capacity, which is unheard of. The first full month that we reopened the Airport – October – we had the third highest passenger count in the history of the Airport; we broke just shy of 28,000 passengers in the month. And November looked to be almost as good.”

Why such good numbers? “I think that people really missed the fact that they could fly out of here for four months,” Stehmeier proffers. “The only choices were for them to go to Vegas, which is a two-hour drive from here, or up to Cedar City, which is about a 45-minute drive from here, but they only have direct flights to Salt Lake City. Skywest did put in an additional flight up there, so that some of the people that were going to be on Delta to Salt Lake from here, would be able to access them there; and those flights were full for the entire four months. So, when we reopened, they came back in droves. And then, the fact that we had a brand new flight to Dallas/Ft. Worth was awesome.”

So now, the Airport is back in a pro-growth mode. “In 2021, we will double the size of the terminal ramp. And then, once that’s done, we’ll be able to park more airplanes on there.” And because St. George Regional is “bursting at the seams,” Stehmeier says that as part of its Capital Improvement Plan, it has made terminal expansion a priority over the next few years. “Our goal is to add three more jet bridges, so we’ll have a total of seven gates. Right now, we have four.”

There will also be some strategic remodeling inside the Airport’s 35,000-sq.-ft. terminal building. Stehmeier explains: “The fire code says our secure area is legal to hold 253 passengers. Right now, in the morning, we have five airplanes that leave from 6 to 8AM. Each one of those airplanes carries 50 passengers. So, if we have all the airplanes full, which happens on a regular basis, and if one or two of them get delayed, we end up having 250 people in the secure area. That gives us three places, legally, to play with. So, we’re looking at a quick fix to get more space there without having to do any remodeling of the walls, or that kind of thing. There’s actually an area on the second floor that we could use, probably, between 75-100 additional chairs and access, but, right now, it’s non-secure. So, we’d have to build a couple of walls and change a couple of doors to secure doors, and then, we would have to take out a stairway and put in escalators. We think that will probably happen in 2022, if not before. It’s just a matter of getting the money and putting it all together.”

For St. George’s major projects, there are two funding mechanisms that provide capital outlay. “Normally, on most of these projects, the FAA will pay for 90 percent, and then we have to come up with ten percent,” Stehmeier explains. “What we’ll use in this particular case will come from Passenger Facility Charges – PFCs. Every passenger that flies out of here pays $4.50 and that money can be used for infrastructure or capital improvements at the Airport. We generate about $450-500,000 a year in PFCs, which means if the FAA funds its 90 percent, and I have to come up with10 percent, I can pay for about a $5 million project, every year. And that eliminates any funds having to come from the general funds of the city or the county. And, hopefully this year, we’ll start building that PFC fund back up to where it was before we did the big project last year, replacing the runway to the tune of $26 million. I had to come up with $2.6 million, and that pretty much wiped out my PFC funds. So now, I’m rebuilding it.”

With the Airport’s runway back up and running, money in the till, and a bevy of plans to keep building and expanding, the future looks bright for St. George Regional Airport.

Located in Southwest Utah, Greater Zion offers an ideal year-round climate and an abundance of recreation. Your Dixie Center event benefits from an impressive interior with maximum versatility, while outside holds incredible adventures. Take in Zion National Park, hiking, biking, canyoneering, golf, OHVing, water sports, and live theater. Inside, impressive. Outside, incredible. This is Greater Zion.