The Warrenton-Fauquier Airport is a county-owned, general aviation airport located 14 miles southeast of the central business district of Warrenton, a town in Fauquier County, Virginia. “The Airport started as a small grass strip in the early 1960s,” recounts Airport Director, Dave Darrah. “It became popular with local folks and grew beyond the grass strip into a paved runway. In the late ‘90s, the County purchased it from the owners and it became a County airport run by a committee. Then in 2012, they hired me and turned the Airport into a department within the County government.”

Today, the 407-acre Airport, with one 5,000-ft. asphalt runway, serves as a reliever airport for Dulles and Washington International Airports. It is run as an enterprise fund that operates on a self-sustaining basis to support the needs of its tenant businesses and the aviation community. “While the County does not subsidize the Airport, we are included in its capital improvement program to underwrite the County’s share of grants from the FAA and the State Department of Aviation,” Darrah says.

Since taking the helm at Warrenton-Fauquier, Darrah reports that there has been quite a bit of activity, at the Airport. By far, the biggest new project was the construction of a brand new, $4.8 million, state-of-the-art terminal building. “The terminal is done,” he relates. “It took a little longer than we determined, because we had some delays in getting some of the material that was needed. We have a 20,000-gallon cistern for our rainwater harvesting project, and we have a 40,000-gallon cistern that is for our fire suppression. And those two tanks had about a three-month delay getting here, which affected some of the other construction. We were actually set to finish the building by July 2019, with some final touch-ups here and there, but we opened the building in January 2020.”

The cost of the entire terminal project was actually $14.8 million, which included all the necessary site development. “We moved 180,000 cubic yards of dirt; we had a tremendous amount of stormwater management that had to be done; and the ramp had to be built,” Darrah remarks. “It was a pretty lengthy and involved construction project, done in two phases. The first phase was to get the actual entrance and the site down to the proper elevation to put the building on and get the ramp area prepared for finishing. The second part was to finish up another portion of the ramp area. And, of course, there’s a builder that did the building portion. There were three different activities going on, almost concurrently.”

The Airport’s new terminal building was designed by Sydnor Tetterton, a Principal of the Price Simpson Harvey architectural and interior design firm of Richmond, VA. Darrah says that the building was planned to be “very green.” In fact, it was built to LEED-Platinum standards; a certification which he is sure could be obtained, should the Airport wish to apply for that designation. The 10,000-square-foot, two-story structure includes a geothermal cooling and heating system with 28 geothermal wells and eight air handlers for its HVAC system. It has 79 solar panels to supply its electricity, and Darrah notes that on a sunny day, the building actually feeds electricity back to the grid. The windows keep heat in during the winter, maintain heat on the outside during the summer, and control the amount of light coming in. The wall insulation is rated 40R. “The building still breathes, but it’s a fairly tight building and is very easy to keep comfortable in all the zones that we have,” he asserts.

The terminal also has a rooftop rainwater harvesting system for potable drinking water, although the system is not yet completely functional. Darrah explains: “We’re not actually delivering water to our system for public drinking because the state has no regulations to support drinking rainwater harvesting in a public fashion. So, we are helping them to develop the regulations and we’re also helping them to develop the filtration system that they require for public waterworks. We’re getting close to getting the second piece of that done, which is the filtration system. The legislation piece takes a little bit longer. We do have the tank installed in the building; it’s ready to go once we get the filtration system in and the regulations are done. We’re working off of well water for the time being. Once that well water comes in, it will also go through that filtration system and make it even better.”

The outside of the Airport’s new terminal is a blend of the old and the new. “One of the things we tried to do when we worked with Syd was to capture old Virginia and old Fauquier, which is wine and horse country,” Darrah mentions. “Part of the building is brick and I asked it to be Thomas Jefferson’s brick – the same style as that on Monticello, Jefferson’s home in Charlottesville. Then, when you look over to the other part of the building, it’s aluminum, so you transition into the modern. It says we’re a forward-thinking county and a forward-thinking organization and moving into the future.”

Already, the terminal has attracted some new tenants. “We have a new tandem jumping parachute company – DC Skydiving Center,” says Darrah. “That’s one new business at the Airport. And we’ve got Aviation Adventures, which was the flight school down in our old building; they’ve leased the new office space up here in our new building and operate off of our new ramp with their flight training.”

“And the terminal is more than just a terminal,” Darrah adds. “It has the ability to be a meeting place for the community; we’ve already had several town hall meetings out here for various events. So, it serves a multi-role. It could also be short-term emergency center in the event that the surrounding area has some kind of catastrophe. The building has plenty of restrooms and showers. So, the state or county can use it as an emergency operations center to coordinate activities.”

Since the FAA doesn’t support terminal building projects in general aviation airports, 57 percent of the building’s $4.8 million cost was supplied by the Commonwealth of Virginia. “That’s based on the amount of space in the building that is considered ‘public space,’” Darrah explains. “We added a thousand square feet on our second floor for offices, so that took away from the amount of public space. The County had to come up with 43 percent of the cost for the building, but out of that 43 percent, about a million of that was donated by a very generous family. The state paid for the floor space in the kitchen, which is designed to provide catering support to an event, but they would not outfit the kitchen. We have top-of-the-line equipment up there – about $40,000 worth of appliances – and that was all donated by generous benefactors around the Airport. They also paid for our furniture in our private spaces and three large TVs. So, when it came time to buy the furniture and the appliances and other accoutrements that you would need to outfit the terminal, it was all paid for by private donations versus public money. We were very fortunate to have that kind of support.”  The state generously provided funds for the public space furniture.

Now that the terminal is complete, Darrah sees it as a major draw for the types of businesses that the County wants to lure to its “green development zone,” which is located across the street from the Airport. “We designed the building to be very green to show the art of the possible to other industry that might want to move into the area, and the County’s economic development team is working to start bringing folks in,” he relates. “We’re sort of the jewel in the crown to help bring that kind of business into our service district here. It’s zoned ‘green industrial’ and our building is very green. I think once they get the public water in and the sewer system put in over there, the businesses will start coming to that particular location. This area has been, primarily, farmland and the focus was on other parts of the County, and now, the County is focusing on this area.”

Another reason that companies might wish to locate near the Airport is its proximity to other modes of transportation, both actual and potential. “Warrenton-Fauquier Airport is strategically located on two very good lines of transportation,” Darrah notes. “One is Hwy 28. While it’s a two-lane in our area right now, the state has plans to make it a four-lane road that extends to Hwy. 17, a couple of miles away. Hwy. 17 is a four-lane, divided highway that offers direct connection between I-95 and I-81 in Virginia. So, that will help. Plus we do have a railroad track that runs right along 28 and there used to be a railroad siding here, years ago. But the potential for having that kind of a transportation node still exists if somebody was willing to develop that. And having this small Airport that can do stuff like small FedEx, small UPS aircraft – not the big ones, but the feeder types – working out of here, or having a railroad node or a highway…we have a perfect storm developing for the businesses that might have that type of capability, if somebody was to look at that and put it all together.”

Regarding land in the Airport proper, Darrah says that there are shovel-ready sites available for new hangars, and other areas that are prime spots but still need some minimal site development. “There are people interested in new hangars,” he says. “The thing is getting the proper funding and coalition together so they can do that. I’m not sure if the Coronavirus got in the way, or they were waiting on the terminal to get done. At this point, it has not happened yet, but we’re working on it. Just today, I spoke to somebody who knows someone who is looking for hangar space or an area to build new corporate-style hangars, so we’ll see if that pans out.”

Meanwhile, COVID-19 hasn’t actually hurt the Airport’s business too much, with the new terminal being a draw for the curious. “During the pandemic, we had a slight drop in jet fuel sales through March and April, but in May, it started coming back; the same with 100 low-lead. With the new terminal, a lot of people want to come in and take a look at the new building. So, folks drop by to see it. We’ve also had several entities use it for business, because we have a very nice conference room. We’ve had everything from our sheriff’s department use it for onsite training; we’ve had Cintas use it for a managers’ meeting; and a few other companies came in and used it. We seem to be a destination that customers are looking for on the corporate side, and the NetJets and other fractional type airlines are looking pretty good for us. So we’re open for business.” 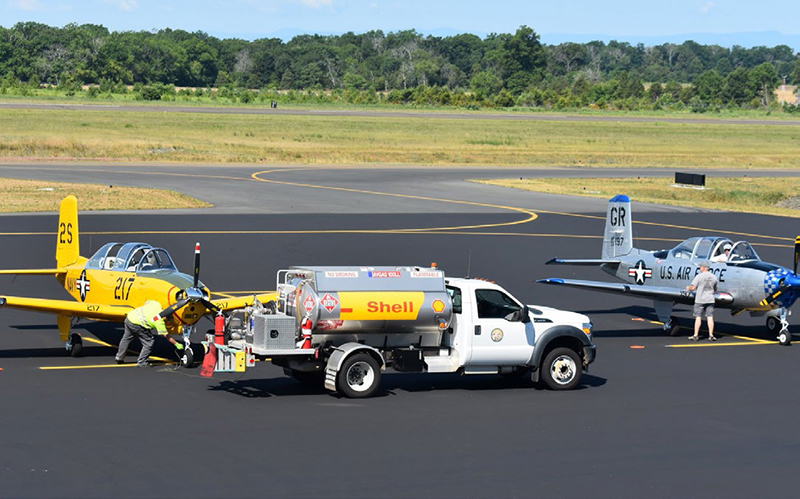 WHERE: Southeast of Warrenton, Virginia