Part of the team

The Warrenton-Fauquier Airport is a county-owned, public-use airport located 14 miles southeast of the central business district of Warrenton, a town in Fauquier County, Virginia. “The Airport started as a small grass strip in the early 1960s,” recounts Airport Director, Dave Darrah. “It became popular with local folks and grew beyond the grass strip into a paved runway. In the late ‘90s, the county purchased it from the owners and it became a county airport run by a committee. Then in 2012 they hired me and turned the Airport into a department within the county government.” 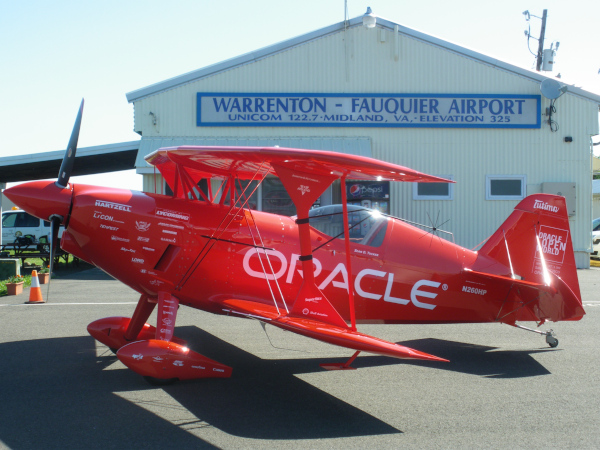 Today, the 407-acre Airport, with one 5,000-ft. asphalt runway, serves as a reliever airport for Dulles and Washington International Airports. It is run as an enterprise fund that operates on a self-sustaining basis to support the needs of its tenant businesses and the aviation community. “While the county does not subsidize the Airport, we are included in its capital improvement program to underwrite the county’s share of grants from the FAA and the State Department of Aviation,” Darrah adds.

Currently, there are 145 GA aircraft home-based at Warrenton-Fauquier. “We have all our hangars full and have a waiting list, just like every other airport around here,” Darrah notes. “Our intent is to build more hangars with ground leases when we get a grant for the site development and there’s a private entity willing to invest in building the hangars. We have four hangar sites operating under that condition now and, with our grant eligibility to help defray the cost of site development, they’ll need to pick up the county share, which amounts to about 20 percent of the grant.”

Darrah adds that there are two other GA airports nearby and remaining competitive is a priority. “We’re all friends and colleagues, but we compete with one another to sell fuel and other aircraft services,” he states. “Each airport has its own niche. For example, Stafford Airport has a military fuel contract, so they get a lot of support from Marine helicopters and other military aircraft that might be passing through. Nearby Culpeper Airport serves the GA community, but unlike Warrenton and Stafford is not a reliever airport. The way I attract folks here is to sell our fuel at a very good price and we have quite a few pilots who regularly choose to stop in and purchase fuel. Another factor is that we are outside the SFRA (the Special Flight Rules Area – an area of airspace that requires ready identification, location, and control of aircraft prior to entry/exit). Many of my tenants are not actually from the local area; they’re from Alexandria, Arlington, Fairfax and Prince William areas to the north. They’re willing to make the additional drive to get here and avoid the extra requirements for getting in and out of the SFRA.”

Since taking the helm at Warrenton-Fauquier, Darrah reports that there has been “quite a bit of activity, at the Warrenton-Fauquier Airport. When I first got here, we needed to finish up our environmental assessments, including a historical environmental assessment,” he explains. “It turned out that there once was a homestead here and a fairly large structure with a foundation and lots of artifacts ranging from 1740 up through the present. In addition, we installed additional lighting and a gated facility with a keypad to update and increase security, along with a drainage project and other, general site development. Taxiway and runway rehabilitation are planned in about three or four years and we’ll have some other, smaller projects that will provide additional, improved amenities for the Airport. Another project on the horizon will be approach lighting for both ends of our runway.”

By far, the biggest new project at the Warrenton-Fauquier Airport is the construction of a brand new, $4.5 million, state-of-the-art terminal building. Slated to be completed by July 2019, with a ribbon cutting later in the fall of 2019, the 10,000-square-foot, two-story terminal building will include a geothermal cooling and heating system, a rooftop rainwater harvesting system for potable drinking water, and a network of solar panels to supplement our electrical service. In addition, the building and parking area will use all LED lighting and the terminal will have high-efficiency windows and walls. “It’s not only a ‘green’ building, but one with a focus on serving the corporate side of aviation,” Darrah says, “providing that CEO, CFO, or CIO the capability to conduct business at our Airport. We’ll have a nice conference room, a warming kitchen, and state-of-the-art electronics for presentations all in a comfortable, convenient setting. And, of course, our regular GA users will benefit, too, by having easy access to the same amenities.”

As the Warrenton-Fauquier Airport continues to develop, both Darrah and County officials see it a key piece in the county’s plans to lure new business to the area. “There’s been a real evolution in the way the county leadership views the Airport from many years ago when some viewed it as a ‘hobby’ airport, to a major engine of economic development for companies we’re trying to attract,” says Fauquier County Economic Development Director, Miles Friedman. “It’s critical in terms of getting funding and political support for the kinds of things that Dave wants to do. Having an individual who’s got vision, who’s creative, who understands how the airport fits in with the county’s overall economic development plans – Dave’s one of the best partners I have and that has been a critical element in the success of this Airport.”

“As we entertain prospects looking to locate in Fauquier County, Dave and his staff are clearly part of our team,” says Beverly Pullen, Fauquier County’s Business Development Director. “We see the Airport as a showpiece and a huge asset. As we work with businesses, it is always a question that is part of an RFI or RFP when companies look to locate here – they want information about our Airport. The new terminal and all of the new infrastructure and improvements that take place here will elevate us to be that much more competitive and attractive.”

“With the coming of the terminal, and the upgrade of water and sewer services to the Airport and the surrounding service district, we will be able to more aggressively attract aviation and non-aviation related businesses to the region,” Friedman says. “We have 30 acres of land right on the Airport that’s currently county-owned and there’s more than that, just outside the Airport, that’s privately-owned that could, conceivably, be incorporated into a business development project; possibly leasing both the county-owned land and some of the privately-owned land outside the Airport to become part of a business park with the Airport in its center and sort of the gem of our green development efforts. The county was the first in Virginia to adopt green development zones in which we are able to offer incentives to environmentally responsible companies. And, with the terminal being a great example of environmentally-friendly development, we see that as a capstone of this business park that would incorporate green as a major element. So we’d be able to attract either environmental companies, or companies that are doing things in an environmentally-friendly way.”

“Warrenton-Fauquier Airport is strategically located on two very good lines of transportation,” Darrah adds. “One is Hwy 28. While it’s a two-lane in our rea right now, the state has plans to make it a four lane road that extends to Hwy. 17 a couple of miles away. Hwy 17 is a four-lane, divided highway that offers direct connection between I-95 and I-81 in Virginia. We also have a nearby railroad siding that used to be operative and able to be renewed. Access to both of those lines of potential transportation improvement will prove to be an asset to anyone choosing to do business here.”

A retired Marine, Darrah says that his military training has taught him to prioritize his commitment to his “masters” when trying to align the Airport’s needs with those of other stakeholders. “The first master is my county government – what the county wants to be and what it wants to do and my vision to support that,” he asserts. “The second master is the air transportation system in the Commonwealth of Virginia and a strong focus on customer satisfaction for both transients and tenants. As Darrah knows, “Counties that have a viable airport are successful; counties that do not have an airport at all, or one that is neglected, don’t do as well.” Warrenton- Fauquier County is stepping forward to meet that goal in a new, green way.

WHERE: Southeast of Warrenton, Virginia