Business View Magazine interviews representatives of the Columbia Metropolitan Airport, as part of our series on U.S. regional airport.

The Columbia Metropolitan Airport (CAE), located five miles southwest of Columbia, South Carolina in Lexington County, is the main commercial airport for Columbia and the Midlands region of the state. In the early 1940s, the facility was known as the Lexington County Airport, developed because Columbia had been identified in early postal airmail routes as a location for airlines then holding contracts with the Post Office Department and the Commerce Department. In 1941, the United States War Department acquired the Airport from Lexington County, renamed it the Columbia Army Air Base, and expanded it dramatically to serve the war effort. Runways, hangars, roads, buildings, and other facilities were added during the war to support the training activities of B-25 flight and bombardment functions.

Following World War II, the Airport was used briefly as a training facility for the U.S. Air Force Reserves. In 1949, the base was declared surplus to the needs of the Air Force and it became a commercial-use and general aviation airport. By the late 1950s, the City of Columbia, planning to make improvements to the Airport, realized that it could not do so alone. A Joint Study Commission was appointed which recommended the creation of the Richland-Lexington Airport District. It also proposed that a new airport, Columbia Metropolitan Airport, be constructed on the site of the then existing one. Today, the Airport is formally recognized as the Richland-Lexington Airport District (RLAD), a special purpose district of the state of South Carolina. The RLAD is governed by 12 commissioners – five members are appointed by the Lexington County Legislative Delegation, five members are appointed by the Richland County Legislative Delegation, and two members are appointed by the City Council of the City of Columbia.

The Columbia Metropolitan Airport covers 2,600 acres and has two runways: 11/29 is 8,601 x 150 ft., and 5/23 is 8,001 x 150 ft. It also has a 50 x 50 ft. helipad. The center 75 feet of runway 5/23 is asphalt; the edges are grooved concrete. CAE has two large cargo aprons, a large commercial apron, and multiple GA aprons serving the two local FBOs: Columbia Aviation and Eagle Aviation. Both FBOs have fueling and aircraft maintenance facilities, large corporate hangar facilities, as well as T-Hangars and canopies. The Airport’s passenger terminal opened in 1965, replacing one that was built in the early 1950s. It was last renovated in 1997. 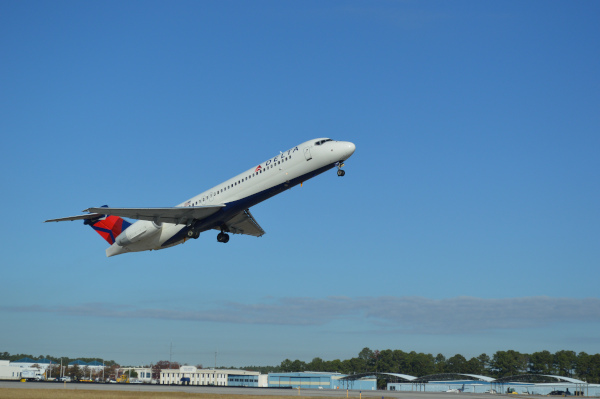 Columbia Metropolitan Airport offers more than 30 daily non-stop flights, with connections to nine large U.S. cities. It is served by American Airlines, Delta Airlines, United Express, and beginning this December, ViaAir. More than 1.1 million passengers travel through Columbia Metropolitan Airport each year. In addition, about a third of its total traffic is general aviation aircraft, and 20 percent of its passengers are military, as the Airport is within miles of Fort Jackson, a U.S. Army installation, Shaw Air Force Base, home of the 20th Fighter Wing, and McEntire Joint National Guard Base.

Columbia Metropolitan Airport is also the state’s top cargo airport, served by Castle Aviation, FedEx, and UPS Airlines, which has one of its regional hubs there. It maintains a newly dedicated air cargo terminal, the Columbia Airport Enterprise Park (CAE Park) and Foreign Trade Zone #127. The Airport has 58 employees, is self-sufficient, and does not receive any state or local tax dollars, but generates around $847 million for South Carolina. Over 40 businesses operate on the airport’s campus, comprising 1,800 full-time jobs.

Mike Gula is CAE’s Executive Director and Frank Murray is the Director of Planning & Facilities. High on their agendas is increasing economic development within the Airport complex. “Right now, our infrastructure is in really good shape,” Gula points out. “We committed a lot of dollars over the last ten years to get things to where they need to be.” Murray agrees. “We’ve gotten caught up with our main facilities,” he echoes. “We’ve done a lot of renovations of our terminal and gotten the airfield where it needs to be. So, we’re at a point, now, where we can start looking to define some projects over the next five to ten years that would lend themselves to economic development.”

“We see a lot of growth in the City and the University (of South Carolina) is expanding in a couple of different research arenas like advanced materials and aerospace technology, and businesses are starting to utilize the skill sets that are here,” Gula reports. “We see that reflected in our enplanement numbers, over the last few years, as businesses start to grow and come into this area. We think that there is opportunity for us if we can add that development to the Airport or around the vicinity of the Airport. That will continue to boost our numbers. It’s a supply and demand situation – the more people that fly, the more competitive our airlines start to be and that starts to push the prices down, while generating the need to go to different destinations. So, the more growth in the City, the better for the Airport, and the more the Airport is likely to get people where they need to go.”

“If there are any opportunities for industrial development around aerospace, we want to make certain parcels site-ready for those types of developments to try and attract some of them, here,” Murray adds. “We think there’s a real synergy here between us and the University with their research and technical training for some of these aerospace type industries. And if we can provide a site and attract some of them here, it would be real positive for the future of the Airport.”

Another area for future growth is in the Airport’s cargo operations. “We have a large UPS facility here and we also have FedEx,” Murray explains. “And as some of these other businesses start to expand, we’re seeing a greater demand for cargo, as well. So, we hope to expand those operations within our footprint.” “We do have certain parcels within the airfield, within the security fence, that we’ve already mapped out for future expansion” says Gula. “We also have a business park across the street, so we definitely have some non-aviation related developments near the Airport itself, and we’re trying to expand that, as well.”

So, CAE’s focus over the coming years will be to foster corporate and economic activity at and around the Airport, while also encouraging its incumbent airlines, as well as new entrants to the market, to offer ever improved flight options. “We have 500,000-plus enplanements each year, approaching 600,000, this year, which would be our strongest year for enplanements in several years,” Murray states, in conclusion. “And we continue to grow and get stronger as the economic environment of the City improves.”

Check out this handpicked feature on The Fernandina Beach Municipal Airport – A community asset.

WHO: The Columbia Metropolitan Airport

WHAT: The main commercial airport for Columbia and the Midlands region of South Carolina