Growing with the Research Triangle

With its vibrant aviation community, expanding facility, and an economic boom taking place throughout the surrounding area, Raleigh Exec, also known as the Raleigh Executive Jetport, has been growing fast and emerging as one of the influential players in North Carolina’s Research Triangle Region.

Conveniently located just 15 minutes from Raleigh’s Outer Beltline, Raleigh Exec is designated as a reliever airport for nearby Raleigh-Durham International (RDU) and has become a hub for corporate aircraft, recreational planes, and aviation-related businesses. The facility using TTA as its airport code is even home to one of the nation’s oldest and most respected flying clubs.

Raleigh Exec serves a region known worldwide as home to Research Triangle Park, one of North America’s largest research and industrial developments, located just around the corner from the jetport. The “triangle” refers to its location among three notable cities, each with a major research university: Raleigh, home to North Carolina State University; Durham, with Duke University; and the University of North Carolina at Chapel Hill.

“Our general aviation airport has played an important part in the area’s overall success,” says Airport Director Robert Heuts. “The Triangle area is arguably the most dynamic region in the country, and this development has been ongoing for 20 to 40 years.”

With the always-growing volume of air and vehicle traffic at Raleigh-Durham International, outlying general aviation airports have been able to capitalize on commercial opportunities. For Raleigh Exec, that includes working with world-renowned companies nearby, including Caterpillar, Pfizer, and Moen, now part of the Fortune Brand Group.

Raleigh Exec operates on 700 acres off U.S. 1 at Exit 76 (Farrell Road), just 15 miles from the Triangle Parkway I-540. While the location is not in the center of the Research Triangle’s core communities, the airport does offer quick and easy access to Raleigh, Durham, Chapel Hill and the Research Triangle Park — as well as Cary, Apex, Sanford and the up-and-coming Chatham Park, a massive live-work-play community just beginning its decades of development.

About 185 airplanes are now based at the airfield – a mixture of single and twin engines, small jets, and turboprop aircraft – but the airport’s management team is especially focused on attracting corporate jets. According to Heuts, “We’re hoping to grow our share of small jets and have added new areas for larger hangars to be built quickly to house larger aircraft.” 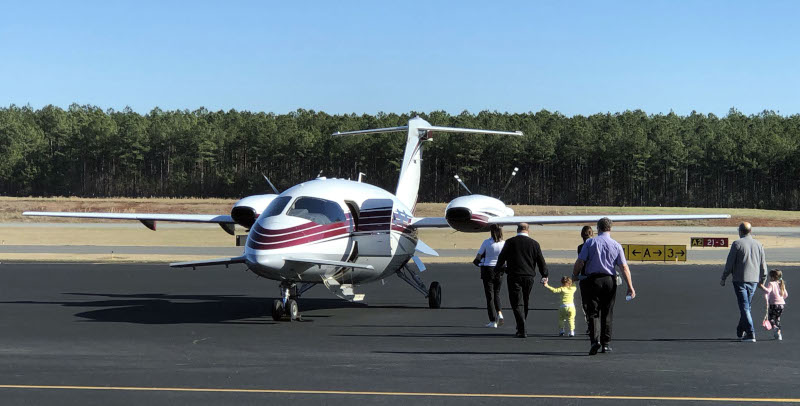 Like other general aviation airports around the country, Raleigh Exec is struggling to keep up with the growing demand for hangar space to store aircraft. Currently, there are 99 T-hangars on-site and leased on a monthly basis for smaller aircraft, but the waiting list has another 50 to 60 names. The good news is that Raleigh Exec has just completed a large, 17,050 square-foot hangar for corporate aircraft and another is under construction and should be completed early this year.

Hangars provide important revenue streams and Raleigh Exec has plenty of land for even more, with additional large hangars already on the drawing board — projects that will require infrastructure and land development grants from the State of North Carolina and the North Carolina Division of Aviation. Those relationships have been strong in the past and the collaboration has resulted in expansion that helps everyone in the region, even the nearby international airport. “All of us understand and recognize the importance of airports like ours and want to see them further develop,” Heuts says. “More corporate aviation moving to Raleigh Exec makes it safer for commercial passenger flights and others flying in and out of RDU. As a reliever airport, we allow smaller aircraft to operate out of our space, freeing up their airfield.”

Raleigh Exec welcomes those smaller aircraft with a contemporary terminal building and a single, 6,500-by-100 foot runway. Operating as its own Fixed Base Operator, or FBO, the airport is responsible for constructing, maintaining, and leasing hangar space, and provides pilots with Jet A and 100LL aircraft fuel. On-site businesses offer a portfolio of services, including complete aircraft maintenance, avionics repair, pilot weather services, flight schools, secure hangars with limited-access gates, courtesy and rental automobiles, and catering.

The quasi-governmental organization responsible for operating the jetport is registered under a former airport name as the Sanford-Lee County Regional Airport Authority, which moved the jetport to its current location two decades ago. At the time, the airport hosted 27 airplanes and leadership understood that a larger airport was needed, one with more space for aircraft, a longer runway and other amenities.

Expansion has been steady ever since. About six years ago, Raleigh Exec rehabilitated its entire runway, which can now accommodate nearly any business jet. Two years ago, it added a new terminal and later completely rebuilt and expanded its aprons and taxiways, allowing aircraft to maneuver more easily and make larger turns.

None of the expansions could have happened without support and funding from the State of North Carolina, Lee County, and the City of Sanford. But those aren’t the jetport’s only partners. Raleigh Exec also works with the Sanford Area Growth Alliance and Sanford Tourism Development Authority to strengthen the facility’s regional impact. “We’re all trying to get those first visitors to come in through our front door at the terminal,” Heuts says. “We’re focused on getting visitors to see our community, potentially move here, and then invest in the area.”

Raleigh Exec is invested in its community, hosting tours for civic groups, opening its meeting rooms to local organizations and holding civic events. The largest is Family Day, which welcomes the community to explore aircraft and enjoy aviation-related exhibits. Another is free flights for children in partnership with EAA Young Eagles, a national organization. Some events were paused during early stages of the pandemic, but are now beginning to return.

“We want to give children an experience that may trigger an interest in aviation,” says Heuts. “Last fall, we restarted Family Day in a smaller format, allowing children to see, touch and experience different kinds of aircraft on the field. As in all industries, there’s a real struggle for aviation companies to find qualified employees and a real need for new pilots. That’s why it’s so important to grab young people’s attention.”

Another example of attracting youth to aviation is the Civil Air Patrol Cadet program for youth interested in aviation or considering a career in the U.S. Air Force. The local squadron based in Apex meets regularly at Raleigh Exec to learn about aircraft mechanics, avionics, and more. 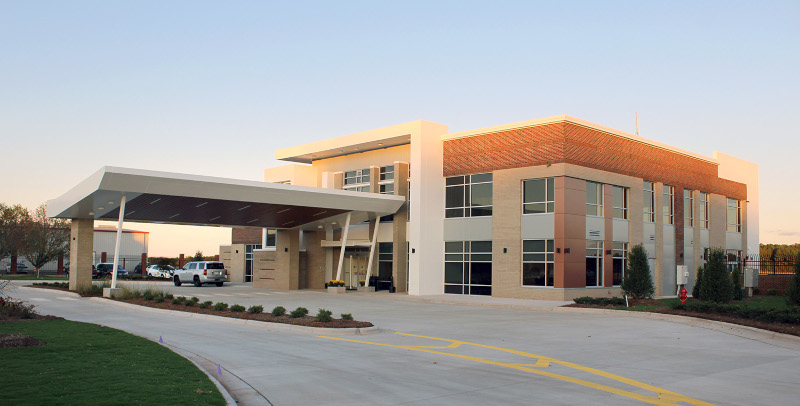 Those activities and the variety of organizations on-site help make Raleigh Exec a vibrant airport community. Wings of Carolina, one of the nation’s oldest and largest flying clubs with about 550 members, is stationed at one end of the runway and provides a community for pilots as well as a flight school with a legacy of quality aviation training. Some members don’t have a pilot’s license, but simply want to be a part of the aviation community; others, who are pilots, have access to about a dozen aircraft the club uses for flight training and leases to licensed pilots on an hourly basis. “It’s a wonderful asset to have on the field, to have that many people come to the airport,” Heuts says. “They’re part of what makes Raleigh Exec such a dynamic place.”

A similar but smaller organization, Odyssey Flying Club, has recently established itself at Raleigh Exec. Elite Aircraft Services manages planes and sells, services, and maintains Cirrus aircraft. AeroServices, an avionics shop that moved from RDU about 20 years ago, has customers fly in regularly for work on their aircraft communications systems. MAG Aerospace, an international company, also provides avionics services along with maintenance for single-piston through twin-turboprop aircraft. The North Carolina Forest Service even operates its statewide aviation maintenance facility and regional firefighting service from Raleigh Exec.

With a growing commercial presence, Raleigh Exec remains focused on protecting its natural environment, going through review and permitting processes when disturbing land, maintaining engineering consultants to review plans, and regularly monitoring facilities at the airport, especially since any airport has a lot of impervious surfaces and Raleigh Exec can experience irregular weather patterns.

Continuing development, strong partnerships, vibrant business and a focus on maintaining the environment are all part of what makes Raleigh Exec’s future look bright. The airport is moving forward with its 20-year master plan, which calls for developing more hangar space and accommodating new corporations relocating to the Research Triangle Region. “There’s no question about being able to achieve these plans, with additional tech and manufacturers moving to the area,” says Heuts. “With that corporate growth, more customers and cargo will be flown in and out of the region, and we need to be ready for it.”

What: A general aviation reliever airport

Discover the charm and vibrancy of Downtown Sanford, NC just minutes away from the Raleigh Executive Jetport. This warm and welcoming spot attracts visitors with exciting things to see, do and experience. Leisurely stroll our quaint streets to marvel at outdoor murals, catch a show at a historic theater, enjoy a locally brewed beer, shop local at unique stores and so much more.

For visiting arts lovers, the historic Temple Theatre, which regularly hosts dazzling shows and performances, is a must-see. Inspired creativity continues from there on buildings and walls all over downtown thanks to the Sanford Art Trail – a public art initiative.

In addition to the arts, Sanford is also home to a handful of amazing breweries and taprooms to entice beer enthusiasts. Camelback Brewing Company, for example, offers rotating taps of craft beer as well as delicious pub snacks, sandwiches and platters.

Venture beyond downtown with recreational opportunities including golf at celebrated courses in Sanford and Lee County as well as hiking, biking, fishing and kayaking to name a few.

And that’s just a taste of what awaits you here. With an open invite to visit us any time of year, we hope to see you soon in Sanford.